Black Radish St. Pete is having a Cuban kitchen pop-up, too. 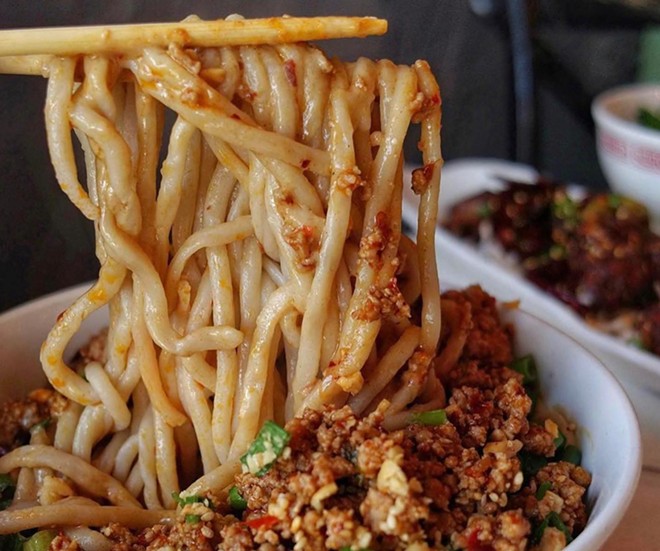 Blackbrick After sitting empty for upwards of two years, Dale Mabry’s former Pop N Sons diner will finally debut as a sleek, new concept. Richard Hales’ modern Chinese restaurant Blackbrick will soft open on Tuesday, Oct. 25, and dinner reservations for its debut week are now available on resy.com. With a menu stacked with savory dumplings and a newly-renovated interior, Tampa's Blackbrick’s will be Chef Hales' first restaurant in his hometown. There are several categories on Blackbrick’s menu, which range from noodle dishes to soup dumplings, chilled and hot appetizers, wok fried rice, dim sum dumplings, large cuts and plant based—which include vegan dishes like Yu Xiang eggplant and Sichuan cauliflower. And for those who prefer a fork and knife over chopsticks, there’s even a section with Americanized classics like General Tso’s alligator, crispy honey chicken and sweet and sour pork. "Tampa's food scene feels like what Miami's food scene felt like 20 years ago. There's this energy where people are doing new things. I feel like the customers here are very devoted to restaurants and honestly, Tampa just feels like home to me," Chef Richard Hales tells Creative Loafing Tampa Bay. 4812 N Dale Mabry Hwy., Tampa. halesblackbrick.com/tampa

Black Cattle Burger Co. Nestled in between Mary Margaret’s Irish Tavern and Top Slice Pizzeria is downtown’s newest late-night restaurant—and it dishes out all of the appropriate greasy eats. Black Cattle Burger Co.—from the brains of local restaurateur Shan Bakrac and Benson Hospitality Group—opened this week on the 200 block of The Burg’. Juicy smashburgers are the star of Black Cattle’s menu, but chicken sandwiches, hand-breaded chicken tenders, fries and salads are offered as well. Although its burgers are customizable, there are a few specials like its "Black Pearl," which comes with two patties, cheese, griddled mushrooms, pickles and truffle aioli. And there’s soft serve ice cream for dessert, too. Black Cattle Burger Co. is now open from 11 a.m.-midnight Sunday-Wednesday and 11 a.m.-3 a.m. from Thursday-Saturday. Follow its new Instagram page at @blackcattleburgers for the latest news on downtown’s newest burger spot. 17 3rd St N, St. Petersburg. Blackcattleburger.com

Tiger Bay Club’s Cuban Sandwich discussion The famed debate about the Cuban sandwich's origins might be solved at next week’s Tampa Tiger Bay Club discussion—but don’t count on it. The non-partisan political forum takes a culinary turn for its next event, which takes place on Friday, Sept. 16 when authors of the new book “The Cuban Sandwich: A History in Layers” Andrew T. Huse, Dr. Bárbara Cruz and Jeff Houck discuss their extensive research on Tampa's beloved sandwich. The book delves deep into the Cuban sandwich’s origins, history, and cultural impact. It will be available for purchase at the upcoming Tiger Bay Club event, with the opportunity to be signed by its authors as well. Tony’s Ybor Catering—which closed its long-running restaurant just last week—will provide Cuban sandwiches for lunch, since all this food talk might make you a little hungry. Next week’s program will start at noon in the ballroom of the Cuban Club in historic Ybor City. This Tiger Bay Club event is open to the public and requires a $35 ticket for non-members, but a first-time ticket for non-members will only run you $25. 2010 N Avenida Republica de Cuba, Ybor City. tigerbayclub.com
Halelife Bakery’s fall flavor launch and sampling weekend Tampa Bay's leading gluten-free and vegan bakery just launched its new seasonal flavors, and it's celebrating with free samples all weekend long,  from Sept. 9-11. Stop into any of the four Halelife locations—in downtown St. Pete, Carrollwood, Clearwater and South Tampa—to sample its new soft-baked cookies, doughnuts and cupcakes. A few of its seasonal offerings that folks can sample this weekend include caramel macchiato doughnuts, pumpkin butterscotch cookies, s'mores brownie cookies, pumpkin cookie dough cupcakes and pumpkin maple bourbon doughnuts—and yes, they're all vegan and allergy-free. Its loyal customers are also anticipating the opening of Halelife Bistro in St.Pete soon, the company's first dive into the world of savory food and full-service dining.  To continue the celebration of its seasonal baked goods launch, all Halelife Bakery locations throughout Tampa Bay are offering 10% off of any purchase all weekend long.  Each bakery has slightly different operating hours, so make sure to check out the specific location's information before visiting.  All Halelife locations in  Clearwater, South Tampa, St. Petersburg and Carrollwood, halelifebakery.com