If you love the popular produce stand, then ask the Hillsborough County government to rezone it. 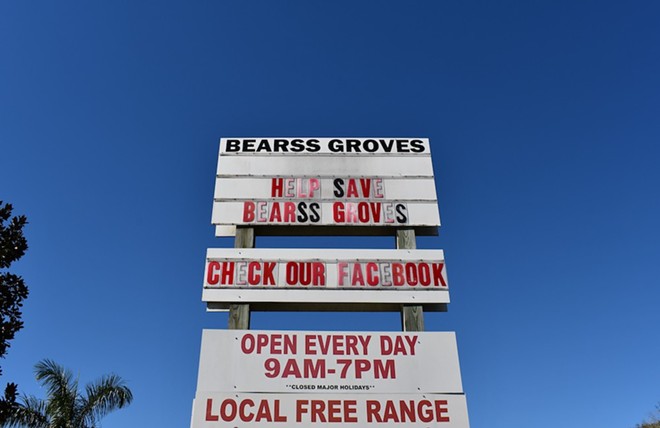 Earlier this week,  Bearss Groves took to Facebook to address its customers and community, asking for their help to keep the 30 year-old produce stand open at 14316 Lake Magdalene Blvd.

“We need to make our voices heard! And you can help us do that by sending a letter of support (via email) for our planned development rezoning!”  Bearss Groves wrote.. “We are rezoning the property in order to stay open and operate our farm stand.”

The post's accompanying photo reads: "We need your help so we can stay open."

Ownership states that they need as many people as possible to email [email protected] with the subject line “Support PD 22-0864,” asking the Hillsborough County government to rezone the historic small business.

Bearss Groves also encourages its supporters to include in their emails how valuable of a community asset it is. In addition to its plea on social media, ownership has also placed a physical sign in the front of the produce market, asking passersby to email as well.

Earlier this year, the popular produce stand said it was in danger of shutting down, citing built-up fines accrued because the county did not recognize Bearss Groves as an agricultural stand.

Although a rezoning would not address the fines, it would allow the farmer's market to sell non-agricultural products, according to Hillsborough County Commissioner Ken Hagan.

Tampa's Bearss Groves Farmer's Market says its on the verge of shutting down due to county fines: Management at the stand says that the county has fined them $200 per day since 2018.

Creative Loafing Tampa Bay reported that in 2018, a code enforcement special magistrate ruled in favor of a code enforcement officer's claims that the farmer's market was in code violation. Since that ruling, the stand has racked up $200 a day in fines.


Back in February, over 1,000 emails were sent to the Hillsborough County Commissioners after Bearss Groves sent an initial cry for community support onsocial media. After the waves of emails, the County Commissioners explored the idea of suspending of the produce stand’s $160,000 of racked-up fines.

Hagan has led the efforts to save Bearss Groves, a business that he and his family frequents often. After the Hillsborough County Commissioners voted to explore options to suspend the market's fines, Hagan continued to work with Bearss Grove and its owner Barry Lawrance to get the business up to code, so it could continue business as normal.

Kagan tells CL that after seeking protections under Florida's Greenbelt Law and a nonresidential farm buildings statute didn't work out, they turned to a rezoning instead.

After the rezoning is hopefully approved (Hagan thinks it will happen this fall) then he and Lawrance can focus on on the thousands of dollars of built-up fines. Although he's confident that the rezoning will be approved, he still encourages Bearss Groves' supporters to email the Hillsborough County government.


"It's always a good idea for applicants to show support from their communities," Kagan says. "People's encouraging emails will become official public records and may help the approval of Bearss Groves' rezoning request."