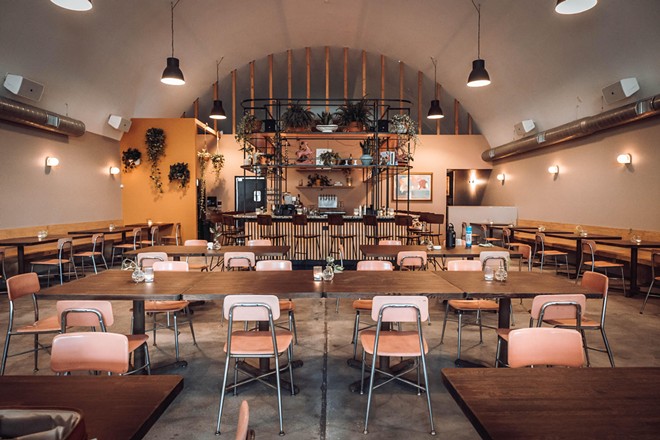 Good Intentions After months of buildout, and a recent weekend of friends and family trial runs, St. Petersburg vegan restaurant Good Intentions will open to the public on Wednesday, Sept. 14 at 5 p.m. The newly-opened restaurant, located in the Grand Central District, will be open at 5 p.m. again on Thursday, Friday and Saturday, with availability happening on a first-come-first-served basis. Highlights on its initial menu include seasonal gnocchi, pan-charred shishito peppers, tofu fries, "devilish" crab balls, buffalo tempeh, its Skyway melt burger and kimchi-fried rice, alongside a variety of craft cocktails and mocktails. After this week's soft opening, Good Intentions will be open from 5 p.m.- 10 p.m. Wednesdays and Thursdays and 5 p.m. -11 p.m. Fridays and Saturdays—as operating hours and menu items will slowly expand. 1900 1st Ave. S, St. Petersburg. @goodintentions_fl on Instagram

Mandola’s Italian Kitchen A recent press release from Mandola’s Italian Kitchen says Oldsmar and Odessa will soon be the homes of its newest Florida restaurants. Oldsmar’s location, at 3138 Tampa Rd., opens on Monday, Sept. 19, while Odessa’s will debut in early 2023. Oldsmar’s upcoming 5,000-square-foot restaurant will open out of a plaza, ​​adjacent to an AMC movie theater, and seat approximately 120 guests. In addition to the restaurant itself, this location will also have a marketplace of sorts where guests can purchase pastas, sauces, imported chocolates and specialty oil and vinegar. The Italian chain, which has locations throughout Texas as well, boasts a menu of hearty Italian dishes. Popular menu items include shrimp scampi, chicken parmesan and lasagna alongside pizzas, salads and soups. Its in-house bakery slings cookies, cakes, cannoli and other Italian desserts. 3138 Tampa Rd., Oldsmar.mandolas.com

The Tampa EDITION Water Street Tampa’s newest hotel, The Tampa EDITION, will debut five different food and drink concepts from Michelin-starred chef John Fraser. Guests will be able to reserve rooms and tables and its various bars and restaurants starting on Tuesday, Sept. 20, according to the TBBJ. Fraser’s five different concepts include the hotel’s signature restaurant Lilac—an Eastern Mediterranean-inspired eatery with a focus on local, seasonal ingredients—Market at Edition, a casual Italian restaurant with ample outdoor dining and another Mediterranean spot called Azure at Edition, which will reside on the hotel's ninth floor. Fraser’s other two concepts are the cocktail-driven and self explanatory Pool Bar and Lobby Bar, which will continue his Mediterranean theme with its various cocktail and small plate offerings. Other food and drink destinations at Tampa Edition (that aren't associated with Chef Fraser) include a second-floor cocktail lounge called Punch Room and a small performance space called Arts Club, that will also offer upscale drinks and light bites. 500 Channelside Dr., Tampa. editionhotels.com/tampa

Mochinut Nestled in a Pinellas Park plaza in between Ding Tea and Carmelita’s Mexican restaurant, is the soon-to-open Mochinut. According to Mochinut’s Facebook, its Pinellas Park location celebrates its grand opening this weekend. The newly-opened cafe will offer “buy 5 get 1 free” deals for its chewy doughnuts and stuffed corn dogs, in addition to 20% off all drinks on Saturday-Sunday, Sept. 17-18. Although its mochi doughnuts are in a constant rotation, flavors can range from ultra sweet to tangy and savory. Popular doughnut flavors include ube, churro, Nutella, cheesecake, yuzu, matcha and mango. There's almost as much variety when it comes to Mochinut's corn dog options, too. Its Korean corn dogs can be filled with either cheese, a hot dog or both—but can be coated with a variety of toppings like french fries, crispy ramen, hot Cheeto dust and crunchy cereal. 6242 66th St. N, Pinellas Park. @mochinutpinellaspark on Facebook

Ybor City’s Buffalo Wild Wings The only Buffalo Wild Wings in Tampa where you have to pay to park is now closed. The Ybor City B-Dubs location is no longer in business, and the sign has also been removed from the historic building. The location has been erased from the company's website, and the Google business page now says "permanently closed. Phone calls to the restaurant from Creative Loafing Tampa Bay also went unanswered. It's unclear exactly why the Ybor BW3 shuttered. The spot was originally opened by its previous owners, Diversified Restaurant Holdings, in 2012 with a 10 year lease. At the time, the company boasted that the new restaurant would be one of the largest ever for the franchise, with a 235-seat capacity. The building’s owner told CL that her tenant—which owns nearby Showbar dueling Piano bar and Tangra—intends to put a new bar in the space. City of Tampa records show that the bar will be called “Southern Belle.” Chris Lenahan, who owns Showbar and Tangra, told CL that ownership is not yet ready to talk about the concept. 1625 E 7th Ave., Ybor City. buffalowildwings.com—Colin Wolf

Tampa Bay’s Oktoberfest 2022 guide Dust off the lederhosen and get your steins ready, because it's Oktoberfest season in Tampa Bay once again. Luckily (for your liver) there are dozens of different celebrations happening on both sides of the bridge throughout September and October—from Green Bench Brewery’s exclusive beer release to Tampa’s 12th annual Oktoberfest at Curtis Hixon Park. Here are close to two dozen events happening over the next few weeks. 23 Oktoberfest events happening in Tampa Bay this fall: How are your stein-hosting skills?

St. Pete-based Mother Kombucha Joins the global B Corp movement The highly sought after B Corp certification is a way for businesses to prove that they adhere to the highest standards of social and environmental performance, accountability and transparency—and St. Pete's Mother Kombucha is the most recent Florida business to meet these standards.  A press release states that Mother Kombucha puts good back into the world by using regeneratively farmed organic fair trade teas, composting 100% of all food waste with local community gardens and offering workshops in home brewing to promote their belief that everyone should have access to kombucha. The St. Pete company joins just 73 other Florida-based businesses that have earned the B Corp certification. motherkombucha.com

St. Pete’s CellarMasters becomes a nationally-recognized bottle shop A St. Pete wine bar and bottle shop recently received national recognition, and it's only been open since 2020. Last week, Wine Enthusiast magazine named The Burg's CellarMasters one of the best bottle shops in the country. Nate Siegel, co-owner of Hyde Park's popular American restaurant Willa's, shared kind words with Wine Enthusiast about the St. Pete bottle shop. "The vibe of the bar is your uncle’s basement in the 1970s in Iowa, with hip-hop music on the speakers. There’s no food, but every first Monday they host a pop up, usually with a taco truck in the back, which is a favorite of industry friends," he tells the magazine. The bottle shop focuses on natural wines and beers in addition to non-alcoholic fare, but also offers a small menu of locally-sourced cheeses, charcuterie and small plates. According to its website, a majority of CellarMasters' stock costs less than $20 a bottle. 1005 1st Ave. N, St. Petersburg. cellarmatersstpete. com