House of Vegano, a plant-based sushi bar, opens in St. Petersburg next week 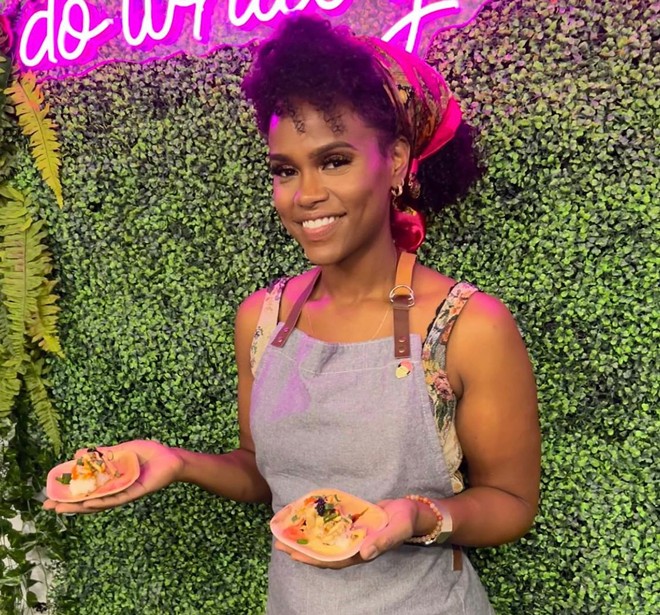 c/o Thalia Tatham
House of Vegano Owner Thalia Tatham.
If you ever wondered what the hell vegan sushi is made of, you can try it for yourself when Thalia Tatham’s first brick-and-mortar restaurant opens next week.

Located inside of the Body Electric space at 655 31st St. S in St. Petersburg, House of Vegano celebrates its grand opening on Monday, March 21.

House of Vegano might ring a bell, as Tatham participates in various pop-ups throughout the Burg’—like at this weekend’s VegFeast at Brick Street Farms or her weekly sushi drop-off at Black Radish Vegan Grocer.

Thatam tells Creative Loafing Tampa Bay that although her most popular rolls will be featured on the restaurant’s menu, future patrons can expect a full spread of ramen, poke bowls and dumplings too.

“I wanted to create a space where being vegan is not just an option—but the complete focus.” Thatam says. “ I think that the health-conscious atmosphere of Body Electric will really fit with our menu and overall aesthetic.”

Everything is 100% vegan, and guests will even have the unique opportunity to make each dish on the menu both gluten and soy free if requested.

Thatham utilizes different types of mushrooms and fruit as fish substitutes, typically marinated in seasonings and spices for the infusion of savory flavors. Jackfruit doubles as tuna tartare, thin slices of cantaloupe serve as salmon, while tomato and watermelon are the stars of Tatham’s spicy tuna roll.

To find all-vegan ingredients, sometimes Tatham has to order products from far and wide, as her vegan caviar from Cavi-Art comes all the way from Denmark. House of Vegano / Facebook
House of Vegano sushi rolls.
And while guests can expect traditional, umami flavors throughout the Japanese-forward House of Vegano menu, Thatham will add her own Caribbean flare to her dishes—something her current customers haven’t experienced yet.

She’s adding a Jamaican twist to her Japanese menu with dishes like oxtail dumplings and curry ramen— alongside traditional flavors like miso and tonkatsu. Thatham uses marinated jackfruit in her oxtail dumplings, which are loaded with jerk seasoning.

Poke bowls will also be on the House of Vegano menu, which are basically “big, deconstructed sushi rolls,” as Tatham says.  Protein options for the poke bowls will include smoked salmon, spicy salmon, krab salad and spicy tuna, which can be topped with house-made sauces like spicy mayo, vegan eel sauce or gochujang.

And for beverages, there will be a wide range of healthy drinks to sip on, including cold-pressed juices and an exclusive flavor from House of Vegano’s Grand Central neighbors Beech Kombucha—with hints of lemongrass, lavender and pineapple.

And although Tatham has no formal training, her culinary creations—like pork belly made out of coconut oil, seitan and bread crumbs—are truly impressive. She notes that her love of cooking and exploring recipes stems from her childhood and family.

“When I was younger my grandfather would host these very elaborate Sunday dinners, and each week he would expose my siblings and I to other cultures,” Tatham says. “Then he would educate us about the cultures. He had a lot of grandchildren, and wanted to show us the world through cuisine.”

Tatham started rolling sushi a little over two years ago when she first transitioned into the plant-based lifestyle, after being dissatisfied with vegan sushi options she came across. Since House of Vegano is so closely tied to her lifestyle, it makes sense that every aspect of her upcoming brick-and-mortar is personalized.

The Jamaican twist she’ll bring to her ramen and dumplings stem from her family’s heritage, while her love of Frida Khalo will be aptly showcased through a mural painted by “Tampa Baes” ​​star and local artist Melanie Posner.

Even the name “House of Vegano” stems from 20th century ballroom culture, where groups of queer performers formed houses to recreate family structures.

Although the small restaurant inside of the Body Electric Athletic Company can only hold a handful of patrons, its intimate nature will allow guests to get an inside look at Tatham actually rolling her sushi. The small sushi bar has its own separate entrance,  but guests are encouraged to sit in Body Electric’s cozy lobby as well.

And although Thatham enjoys different cuisines from around the world, sushi has always been her favorite. She tells Creative Loafing about the best sushi roll she ever had while on vacation in Mexico, pre-transition to veganism.

So when Thatham sees you shed a tear at House of Vegano next week— she’ll completely understand.

When House of Vegano debuts in a few days, the new vegan sushi house will be open from 11 a.m. to 2 p.m. and 3 p.m. to 6 p.m. every day except for Tuesdays— as Tatham will continue her weekly drop-offs at Black Radish.