And we have a full roundup of Tampa Bay's hottest New Year's Eve parties. 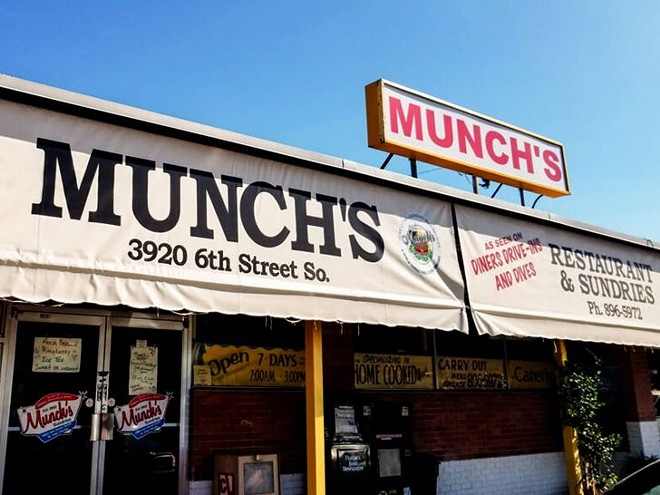 Munch’s Restaurant & Sundries A popular and longstanding no-frills diner experience in St. Pete will soon come to an end.Munch's Restaurant and Sundries—which has operated in south St. Pete since 1952—will close its doors next week, as owner Larry Munch recently finalized the sale of both his business and the property. However, there's a possibility of the property's new owner continuing the historic restaurant, since their $2.7 million dollar purchase came with the business's name and equipment as well. Although there's a chance that the Munch's legacy will live on, loyal customers of many different ages have already started to say their goodbyes to the iconic St. Pete eatery. According to its Facebook page, the iconic diner will serve its very last customers on Friday, Dec. 30. “December 30 at one o’clock is the last day, also special menu and hours for the last week will be posted by this Thursday,” Munch’s stated on Facebook earlier this week. The diner will be closed on Christmas Eve and Christmas Day, and will reopen next week with limited hours to serve its final customers under the original ownership. 3920 6th St. S, St. Petersburg. munchburger.com

Perry’s Porch The folks behind some of St. Pete's most popular bars are opening a brand new concept that will surely boast one of the best waterfront views in The Burg.'  Perry's Porch is a new restaurant that will open adjacent to the St. Pete Pier and the St. Petersburg Museum of History,  a space that was most recently occupied by craft beer spot Hops and Props. This upcoming concept will be a combination of open-air and indoor seating, since its name is a homage to the 20th century developer Perry Snell, who’s known for revitalizing several St. Pete neighborhoods with his unique approach to architecture and nature.  Perry’s Porch will offer a menu chock full of fresh and local flavors when it debuts sometime in 2023. Seed and Feed Hospitality Group are the folks behind Perry’s Porch, who also operate popular concepts like Trophy Fish and Mandarin Hide in St. Pete and Mandarin Heights in Tampa. According to a press release,  Perry’s Porch will offer a unique, to-go “picnic experience” for folks who want to enjoy their meal at Spa Beach Park or Vinoy Park instead, in addition to a curated drink menu similar to that of its sibling concepts.  Renderings from St. Pete-based WJ Architect firm depict Perry's as a sleek restaurant with an adjoining cafe, both covered in dusty pink tones and scenic foliage. 600 2nd Ave. NE, St. Petersburg. perrysporch.com

All the Tampa Bay New Year’s Eve parties, events and celebrations happening next weekend It’s finally time to say goodbye to 2022 and ring in the new year—and Tampa Bay’s wide spread of bars, restaurants and event spaces have got you covered. From casual bar shindigs to fancy galas and rooftop parties (or just staying in because it seems like everyone’s sick right now), here are 42 New Year’s parties, events, and celebrations happening around the Bay. Just a few popular Tampa Bay bars, restaurants and venues that are hosting exciting events next weekend include Armature Works, Cage Brewing, The Don Cesar, Floridian Social Club, Hotel Haya, Zoie’s, Sal Y Mar and Independent Bar and Cafe. Tampa’s Independent Bar & Cafe will have a New Year’s Eve hot dog bar: This party doesn't have a dress code or cover fee either.

Taste at the Straz 2023 This all-you-can-eat-and-drink party happens on April 9, 2023, starting at 6 p.m. and ending whenever you’re too full or drunk. Best of all is that much of it takes place in downtown Tampa, right there on the Riverwalk. While the full restaurant list for 2023’s installment of Taste at the Straz (stylized "TASTE") has yet to be announced, a few popular Tampa Bay restaurants that we hope return for another year include The Brunchery, Fresh Kitchen, Bavaro's, Noble Crust, Buy Ramen, Columbia, Portillo's and Butter's Burgers—alongside many, many more. Tickets for Taste at the Straz are on sale now, starting at $95 for general admission. VIP tickets go for $175 each, but come with a variety of perks like early entry and access to all VIP lounges, in addition to all you can eat and drink. And if you’re really trying to spend some bread, you can reserve a $2,000 table for you and nine of your closest friends. In addition to a wide spread of local eats, wine, cocktails and craft beer, live music will take place on 4 different outdoor stages throughout the event. 1010 N Macinnes Pl., Tampa. strazcenter.org

Ambitious Tampa Bay cooks find success in Metropolitan Ministries’ culinary arts programs For recent graduate Qubilaha “Sweets” Henry, enrolling in Metropolitan Ministries’ Culinary Arts program was all about doing something different for herself. Prior to that, she hadn’t worked in years, so the Tampa-based program helped rebuild her confidence.“I hadn’t worked in a long time, so this was a good opportunity to start believing in myself. It was a good mind change for me,” she said. Enrolling in the program is simple: you have to be 18 to apply, but there is no age limit. Graduates are equipped with basic skills like proper knife use, baking, and back of house operations. Once students graduate the 12-week program, they intern at area restaurants for a short period. Instructors at Metropolitan Ministries understand their students have lives outside of the program so they try and help them in any way possible from paying a living wage of $15.50/hour, which helps if students have no other source of income while enrolled, to even purchasing bus passes for those without personal vehicles. “You’re not just learning how to cook. You’re learning stuff mentally,” Henry said. “They’re trying to really help you.” If you or anyone you know may be interested in enrolling in Metropolitan Ministries’ Culinary Arts program, reach out to their program coordinator Kalonji McClellan at (813) 209-4889 or email [email protected]—Alexandria Jones

Tampa's Ocean Prime and Ulele make Opentable's 'Top 100 Most Beloved Restaurants in America' list Another year, another listicle from your favorite online reservation and review website, Opentable.com. Opentable analyzed more than 13 million reviews from its diners across the U.S. to compile this year's superlative list. The website releases different "Top 10" lists throughout the year, but its end-of-year "Top 100 Most Beloved Restaurants" is its most widespread and honorable roundup by far. Among its 100 best restaurants in the entire country, Tampa Bay's seafood-focused eatery Ocean Prime, native Floridan-inspired Ulele and Cooper's Hawk Winery and Restaurant made the cut. A little further south of Tampa Bay, Sarasota's Connors Steak & Seafood and LongBoat Key's Dry Dock Waterfront Grill also made this year's "Top 100 Most Beloved Restaurants" list. Ocean Prime is known for its massive seafood towers, sushi rolls and freshly-caught fish, while Tampa Heights' Ulele focuses on native Florida ingredients and flavors, like its popular alligator hush puppies and tomahawk pork chops. Coopers Hawk Winery and Restaurant boasts a menu of pastas, risottos and steaks that compliment its wide variety of wines, cocktails and sangrias.