The 12-week program teaches the basics of cooking. 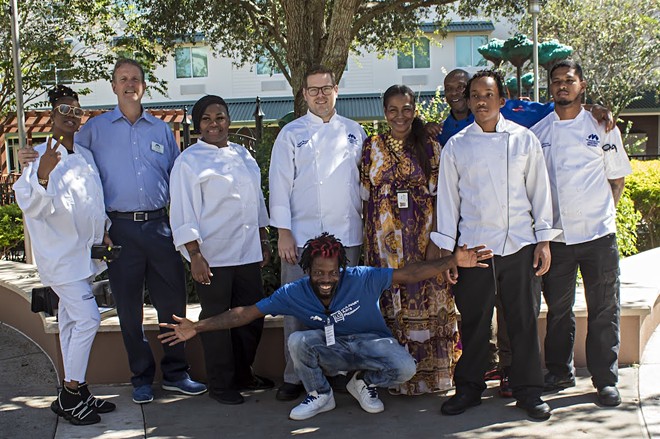 “I hadn’t worked in a long time, so this was a good opportunity to start believing in myself. It was a good mind change for me,” she said.

Her favorite thing in the program: learning how to chop, specifically cutting peppers because it taught her a different way to prepare the vegetable. “I want to be a prep cook; I want to be a helper,” she said.

Enrolling in the program is simple: you have to be 18 to apply, but there is no age limit. Graduates are equipped with basic skills like proper knife use, baking, and back of house operations. Once students graduate the 12-week program, they intern at area restaurants for a short period. Instructors at Metropolitan Ministries understand their students have lives outside of the program so they try and help them in any way possible from paying a living wage of $15.50/hour, which helps if students have no other source of income while enrolled, to even purchasing bus passes for those without personal vehicles.

“We just want them to be able to get that job and not have to struggle once they get started,” Culinary Instructor Joshua Young told Creative Loafing Tampa Bay.

Young added that some students can get their foot in the door via Metropolitan Ministries’ annual Tampa Bay Food Fight contest. “The participating restaurants know about the program and have taken students in the past,” he said.

Towards the end of the program, each student gets to lead the class for the day. The student and instructors work together to create a menu before developing a recipe to feed 100 people.
“It’s like a culmination of all they’ve done and they really get to enjoy that,” Young said.

Kitchen Manager Alice Mann worked at Taco Bell for 30 years, most recently as a general manager before a friend convinced her to enroll in the culinary program in 2019. The program was a life-changer for her.

“The program was excellent. Very good, very educational,” she told CL. “Even though I grew up cooking, it’s different when you’re in a classroom setting.” 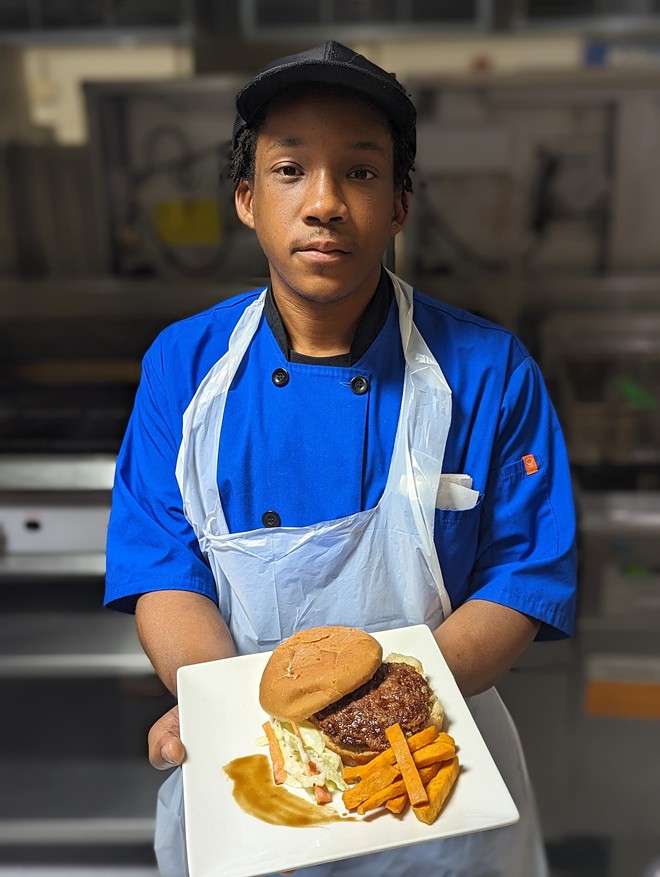 Photos c/o Kalonji McClellan
Jihad McClellan making his class meal: Thai burgers and sweet potato fries.
Two weeks before graduating second in her class, Mann said that Cliff Barsi, Vice President of Social Enterprise and Food Services, and Chef Lewis offered her a job at Metropolitan Ministries. She started out in the catering department, moved up to overseeing the childcare program, then was promoted to her current role just a couple months ago.

“I feel like God told me to be here. Every day I come to work feeling like I’m not even working because I love it so much,” Mann added.

Metropolitan Ministries has another iteration of the program in St. Petersburg at Tropicana Field and is bringing one to the Innisbrook Resort in Palm Harbor. This gives students a chance for more hands-on experiences cooking in a different setting than a classroom. They’ll get the chance to work alongside other chefs while learning how to make food for a larger number of people than they’re used to.

If you or anyone you know may be interested in enrolling in Metropolitan Ministries’ Culinary Arts program, reach out to their program coordinator Kalonji McClellan at (813) 209-4889 or email [email protected]