Be as vivid and complex as you need to be. 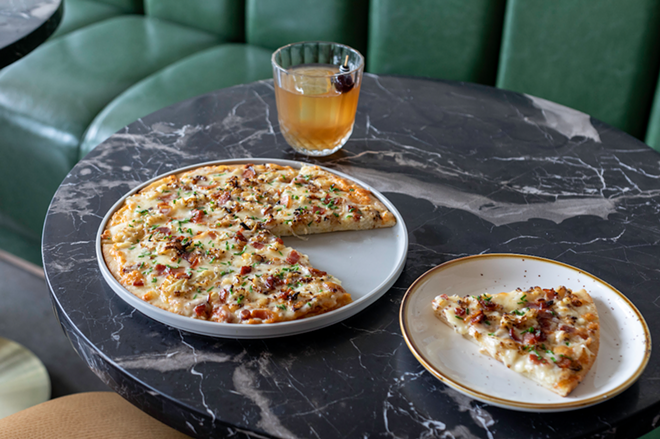 As a critic and avid reader who was once married to an English professor, language and its nuances have played an important part in my life. I’m blessed with natural curiosity and, in some circles, an annoying interest in minutiae. So when I see that Zac and Christine Feinstein’s new social club with craft cocktails and gourmet snacks is named “Sonder,” I’m brought up short.

Saunter? Sounder? Sunder? No, Sonder, which it turns out is something I’ve pondered since first hearing playwright Tom Stoppard’s trenchant observation in "Rosencrantz and Guildenstern are Dead" that “every exit is an entry somewhere else.” Sonder is the “realization that each random passerby is living a life as vivid and complex as your own.” Each of us stars in a script that plays out in a dramatic structure with inciting incidents, supporting actors, climaxes and an ultimate denouement. It’s usually foremost in my mind when I’m stuck in traffic on I-275. I mean, who are all these people and where are they going?

Thinking about this too much will drive you to drink — as if you need encouragement. But it’s a good enough reason to grab a cocktail and a snack which are available here even into the wee hours on Friday and Saturday.

There are many handsome touches in Dunedin’s first craft cocktail bar. Hip cane-back chairs with leather seats, round variegated black marble tables, a long tufted banquette in a rich shade of Hunter Green. There’s even library shelves in the corner reminiscent of Downton Abbey. But wait, are those hidden doors lined with books like something out of Agatha Christie? Upon further inspection, a peek behind the doors reveals lovely restrooms to wash the crumbs from your dainty hands.

I’ve got a thirsty group in tow, each with a different taste in cocktails. The bar deliver the sophistication and attention to detail that’s been promised. N.T.S (vodka, lemongrass, mint, white grapes, champagne) and Gold Coast (Irish whiskey, lemon, red fruits cordial, black tea, champagne) both deliver on complexity and balance.

My Sonder Old-Fashioned taps a duo of bourbon and rye, uses honey for sweetness, and adds both banana and chamomile accents. Attention to detail is obvious — a single, large cube of clear ice, dark cherry, and an ample strip of orange trimmed with pinking shears for a saw-toothed edge.

“Born in Bombay” is a nonalcoholic wonder of Indian spice and lassi. It’s a tall glass with curves in all the right places where crushed ice spills from the top like a strapless gowned starlet on the red carpet.

We switch to the hot plates and devour a pair of fluffy steamed bao buns stuffed with lush shreds of slow braised beef short rib that beautifully contrasts with complex crunchy ginger-carrot-daikon slaw topped by fresh cilantro leaves. There’s also some Lao Gan Ma Chili Crisp, a Chinese condiment with a cult-like following and some fermented chili aioli for dipping.

The only disappointment is the baby beef Wellingtons. There are six small golden balls that resemble a dim sum option, but the flaky puff pastry that wraps ground Hereford tenderloin and truffled mushroom duxelles is soggy. There’s plenty of flavor, especially with a dip in the grainy mustard cream, but the texture is off.

The cauliflower truffle pizza, however, is surprisingly good. The cauliflower crust is thin and crisp and packed with all kinds of goodies. Melted aged white cheddar and roasted garlic cream serve as a base for bits of caramelized cauliflower florets, gourmet Nueske bacon, and a sprinkling of freshly minced chives.

The three desserts options are all superb. An individual goat cheese cake is baked in a faceted mold to resemble an ancient Aztec temple. There’s an almond crust and lemon zest to give citrus notes to the goat cheese. The plate looks like a concrete skate park for Smurfs; it’s not quite a half pipe, but the curved edges cradle the cake and fresh whipped cream garnished with candied zest and mint. Thin slices of tiny Adriatic figs looks like a school of fish swimming up a thin stream of port wine reduction. All the tastes meld beautifully.

The rich, dense Grand Marnier fudge cake is less complex, but packs a knee-buckling punch for chocoholics. The dark chocolate ganache glistens and the liqueur only heightens the effect. There’s a snake of raspberry purée and some whipped cream to soften the chocolate’s knockout blow.

Four layer carrot cake is equally seductive with crushed pineapple, roasted walnuts, and classic cream cheese icing. The whipped cream isn’t as necessary a diversion, but it sure is yummy.

Please note that there are early week specials to entice you to the club after work, including 30% off on Hospitality Monday, curated themed cocktails on Tuesday, and hump day celebrations discounting high end spirits to explore your palate. This is one social club you’ll be pleased to join.

CL Food Critic Jon Palmer Claridge dines anonymously when reviewing. Check out the explanation of his rating system, and email him at [email protected]