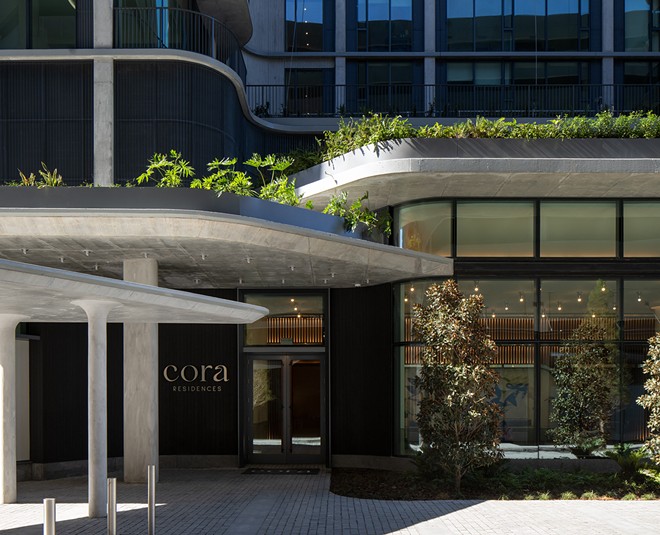 c/o Strategic Property Partners
The bottom floor of Water Street Tampa's Cora building, at 1011 E. Cumberland Ave.
It seems like there is a constant stream of new businesses heading to downtown's  Water Street Tampa, and now we have Predalina – the most recent announcement in a long, never-ending list of “coming soons.”

Located at 1011 E. Cumberland Ave. on the bottom floor of the Cora building, Predalina is slated to debut in early 2023. Future patrons can expect a full-service restaurant and bar that focuses on Mediterranean-style seafood, alongside a retail area that specializes in crafted tabletop wares and unique home décor.

A press release from Strategic Property Partners, states that Predalina will also have outdoor dining, a raw bar, wood-fired oven and wine cellar. The dining space spans almost  7,000 square-feet while its patio provides an extra 2,000 square-feet for Predalina’s future diners.

Although the restaurant’s menu and other details haven’t been released yet, the Oxford Commons website states that its newest concept is “named after the owners’ great-grandmother, Predalina, and will be a nod to her long and prosperous life.”

Predalina—the great grandmother of Oxford Commons’ Blake Casper and Allison Adams— lived in places like Portugal, Brazil and Rhode Island throughout her 101 year-old life and had a serious love for waterfront living, as the restaurant will boast a seafood-driven menu inspired by its namesake.

Although its website is still under construction, you can head to predalina.com or its Instagram at @predalinawaterstreet for the latest information on this new restaurant and boutique.

Other concepts from Oxford Commons include downtown St. Pete's The Library, The Current Hotel, and its flagship location, the popular Oxford Exchange.