King of the Coop, Westshore Pizza and Rock Brothers Brewing under one roof. 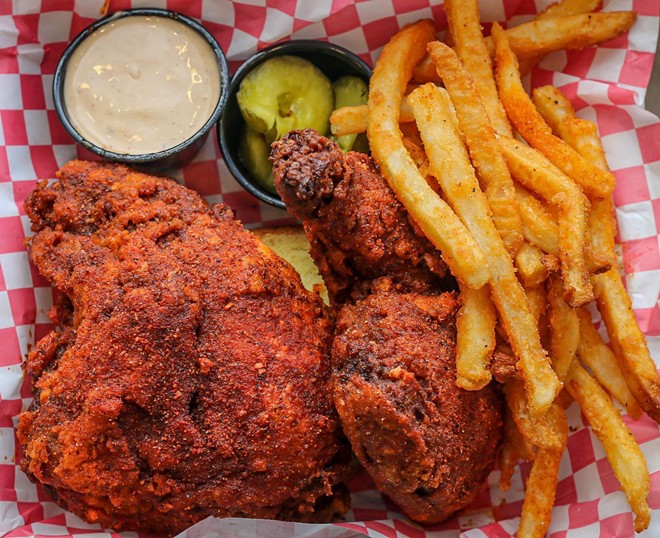 According to a Facebook post by the CEO of Westshore Pizza Travis Masters, the highly anticipated eatery is slated to open on March 19 at 5910 N Florida Ave. in Seminole Heights.

FLocale’s 8,500 square-foot space will feature a 40-foot bar and almost 200 seats. The space was previously home to The Refinery—one of Seminole Heights’ most popular restaurants, up until it closed in the summer of 2019.

The building is currently leased to Flocale Holdings LLC; King of the Coop founder Joseph Dodd is the only name associated with the LLC, according to Sunbiz.org. Dodd told Creative Loafing Tampa Bay that his flagship King of the Coop location in Seminole Heights— which first debuted in 2019 and is currently takeout-only—will permanently move to FLocale.

This new King of the Coop will have exponentially more parking spots compared to its OG Seminole Heights location.

According to Dodd, FLocale will also be available for event rentals. When CL first reported on FLocale last fall,  Masters stated that the eatery would partner with local concert promoters FWD Thinkers to host live music in the new space, although no new information about that collaboration has been shared.

Cigar City’s founder Joey Redner is also involved with the project, alongside Dodd and Masters. In 2016, Redner sold a controlling stake in Cigar City and is currently involved with Rock Brothers Brewing Company— the upcoming managers of FLocale’s 40-foot bar.

King of the Coop, a rapidly-expanding hot chicken empire, just debuted its St. Petersburg location just a few weeks ago; it already has locations in Wesley Chapel, South Tampa and Seminole Heights.  Westshore Pizza—which has been a local franchise for two decades—also has various locations throughout the greater Bay area, with pizza shops in Largo, Seminole, Tarpon Springs, Tampa, Brandon and beyond.

You can expect salads, wings and hoagies alongside King of the Coop’s hot chicken sandwiches, tender boxes, and southern comfort food-inspired sides.

Rojotheartist, the muralist behind King of the Coop’s iconic rooster, has painted the interior of the new multifaceted restaurant and taproom. According to his Facebook, the theme of FLocale's aesthetic is “City of Gold,” which features deconstructed Tampa mascots alongside gold coins and skulls.