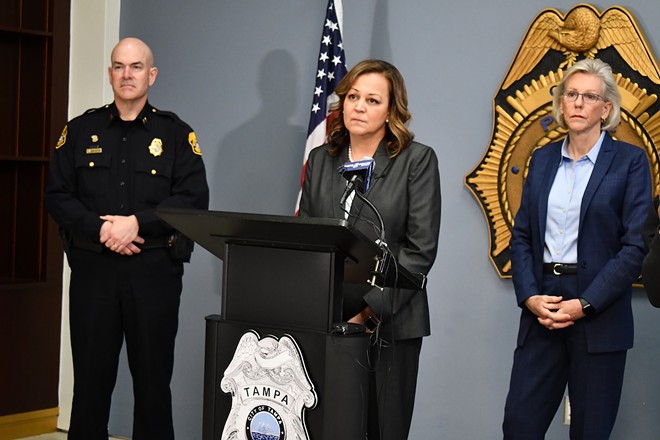 The program came to be known as "Biking While Black."

O'Connor was also involved in a series of email exchanges that discussed her attending a luncheon to speak on the merits of Tampa's "Crime Free Multi-Housing" program, which disproportionately targeted Black renters for eviction and came to be known as "Renting While Black."

CL's public records request into O'Connor's involvement with the programs was submitted on Feb. 22—14 days after Castor appointed her as police chief and set off widespread controversy over O'Connor's past arrest for battery on a law enforcement officer and Castor's lack of transparency in the selection process. 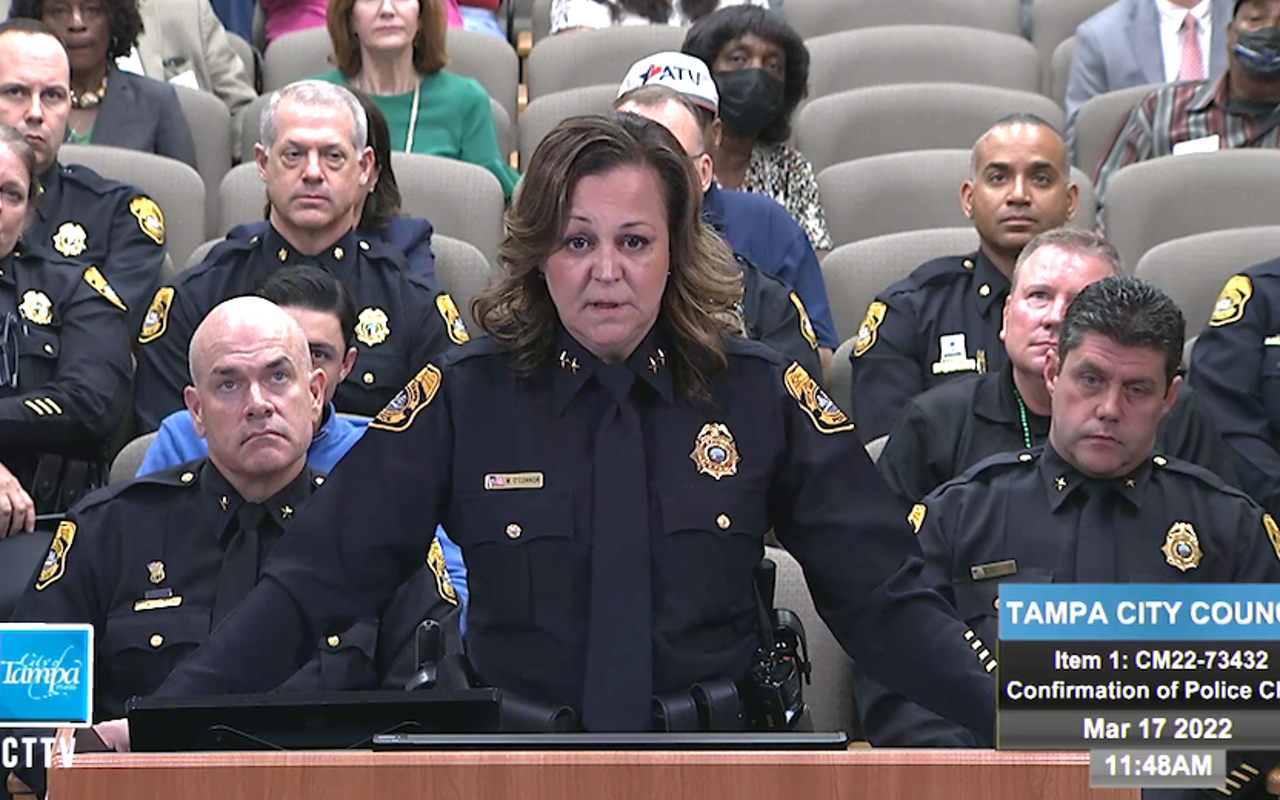 At the request of this publication, the Florida Center For Government Accountability –  a nonprofit government watchdog organization – sent TPD an email on April 6 regarding the information requested, and six days later CL's request was fulfilled.

The emails span from 2012-2015, when O'Connor was climbing the ranks from major to deputy chief. She became assistant chief of operations in 2015, where she worked directly under then-Police Chief Jane Castor and Chief Eric Ward. O'Connor retired from TPD in 2016, and was selected as police chief by Mayor Castor in February.

An October 2015 email from O'Connor's time as assistant chief is labeled "restricted," shows that an officer working under her advised TPD officers to ramp-up bicycle citations in District 3. The district covers East Tampa, Ybor and the Port of Tampa area and is known for being a primarily Black district.

The emails were sent to O'Connor five months after the U.S. Department of Justice began an investigation into TPD's bicycle stop practices and six months after a Tampa Bay Times investigation revealed that TPD was disproportionately targeting Black bicyclists.

"We have been doing a great job this year fighting crime, but we should always be looking for ways to improve," then-Captain Charles Courtoy, who worked under O'Connor, wrote in the email to District 3 high ranking officers. "One area that seems to offer the most opportunity involves bicycle stops."

The officer then sent an email to O'Connor saying, "Here is what I sent reference bikes."

In its investigation, DOJ concluded that the program “burdened Black bicyclists by disproportionately stopping them,” but “did not produce a community benefit in terms of bicycle safety, bicycle theft, or crime generally."

An email from then-Lieutenant Craig Sawicki in 2012—another officer who worked under O'Connor in District 3—encouraged officers to, "concentrate on bicycle stops, bicycle citations, field interrogations, juvenile and adult checks, etc." Grids Sawicki wanted to concentrate on included 75, 86 and 87—all in East Tampa's predominantly Black neighborhoods.

"Please have zero tolerance in these areas," the email with O'Connor CC'd read. These emails came during the height of the "Biking While Black" citation and arrest frenzy. No emails sent to O'Connor reference a "zero tolerance policy" for bicyclists in any of the other wealthier, whiter districts in Tampa.

A Tampa Bay Times profile about O'Connor's initial retirement from TPD in 2016 said, "She held the reins while the department grappled with controversies such as racial disparities in its bicycle citations and a surge in violent crime last year."

While O'Connor was silent in many of the emails found in the public records request, she forwarded some to other members of TPD, indicating she was aware of what the officers under her command were advising, under her leadership.

O'Connor also played a role in Tampa's "Renting While Black" program, which came under scrutiny last fall after a Tampa Bay Times investigation found that TPD teamed up with landlords to evict tenants if they were involved in crimes as petty as panhandling and shoplifting.

An email from 2015 shows that O'Connor was scheduled as a guest speaker at a luncheon for the Tampa Housing Authority (THA) to discuss the merits of the crime free multi-housing program in low-income public housing communities.

"We ask that the main topics be based around your Crime Free Multi Housing program, community policing and the relationship between TPD, THA and resident council in working together to deter and prevent crimes in our public housing communities," read the email request from Bill Jackson at the Tampa Housing Authority.

O'Connor told Jackson she would attend, and was sent documents by Jackson to prepare for the event. On the phone, Jackson confirmed to CL that O'Connor spoke at the event, but said he "couldn't remember" any of the details of what she said.

Current Assistant Chief of Operations Lee Bercaw is also included in several of the emails, and is listed as a point of contact for the program in a memo sent out by  Castor.

Under the crime free multi-housing program, 80% of the people evicted were Black, many of whom relied on low-income housing. At times, they were evicted for crimes such as panhandling and petty theft. Meanwhile, O'Connor overcame her felony arrest to rise through the ranks and oversee these programs.

And new presentation slides obtained by CL show that the crime free program featured even more racially-charged imagery and language than previously reported. 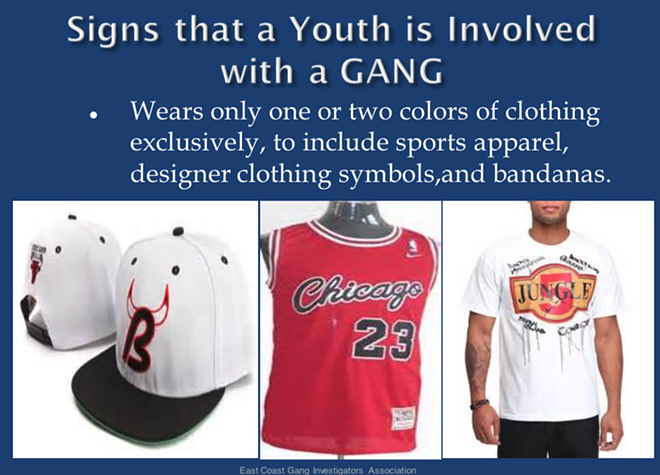 Tampa Police Department/Crime Free Multi-Housing Program
A slide from TPD's presentation to landlords says that young people wearing sports apparel and designer clothes might be gangsters.
One slide from the presentation shown by TPD to landlords likens young people to gangsters if they wear, "only one or two colors of clothing exclusively, to include sports apparel, designer clothing symbols, and bandanas."

The workbook for the program degradingly calls potential criminals the, "two-legged urban breed of predator" and tells landlords to, "plan your words very carefully...discrimination suits are filed when managers say too much!"

Connie Burton, resident of East Tampa and 40-year advocate for civil and economic equality, said that the Black community is owed "much more than an apology" from O'Connor and TPD.

"We Black people continue to be the cash cow for officers who are seeking promotions, like Mary O'Connor," Burton told CL. "She skirted around these racial issues during her confirmation process, which shows that she doesn't want to confront the suffering she caused in an honest way."

Burton said that East Tampa hasn't seen enough action from the city to economically develop the area, in order to help repair the community TPD has, "damaged over the years." She said that crime free multi-housing was just an extension of the former "one strike and you're out" rule, which also targeted poor Black renters for eviction.

"Until she apologizes in a meaningful way, her words are meaningless to me," Burton said.

CL reached out to TPD to see if Chief O'Connor would like to comment on her involvement in the racially-biased programs, and, given the effect it had on the Black community in Tampa, if she thinks the community is owed an apology from TPD.

There was no response at the time of publication of this story.

After initially standing behind the bike stop program, Castor—police chief during "Biking While Black"—changed her tune during her run for the mayor's office, admitting that the citations were wrong.  However, she has not yet officially apologized. Castor stood staunchly behind the crime free multi-housing program despite cries from the ACLU, NAACP and civil rights and lawyer groups from around the country. Eventually, though, the crime-free housing program was changed to a less intrusive model under the leadership of Interim Police Chief Ruben "Butch" Delgado, who Castor passed over when selecting a police chief early this year.

Recently obtained notes from a 2019 TPD meeting show that TPD leaders were preparing for backlash about the crime free multi-housing program from the ACLU and NAACP. In the meeting, TPD officers discussed changing "questionable portions" of the program's lease addendum, to avoid pushback.

Tampa Police Department
Notes from a TPD meeting on crime free multi-housing, where they referred to the NAACP as the "NWACP."