During a morning press conference at TPD headquarters , Castor said that she "conducted a very thorough search" for a chief, but that O'Connor stood out above the other finalists: Assistant Chief Ruben "Butch" Delgado—who's been interim chief since Brian Dugan retired in September—and Miami Police Department Assistant chief Cherise Gause.

Many on the outside saw Delgado as a lock to become to the new chief; instead he'll serve as assistant chief alongside 25-year TPD vet Lee Bercaw. City Council still has to approve Castor's pick.

"We had three outstanding candidates for the chief of police. But in the final analysis, it is Mary O'Connor who stood out because she brings the best of both worlds," Castor said. "She brings a knowledge of the Tampa Police Department and our community and she also brings an outside viewpoint."

O'Connor is no stranger to TPD, where she served for 22 years and climbed the ranks to become assistant police chief, before retiring in 2016. 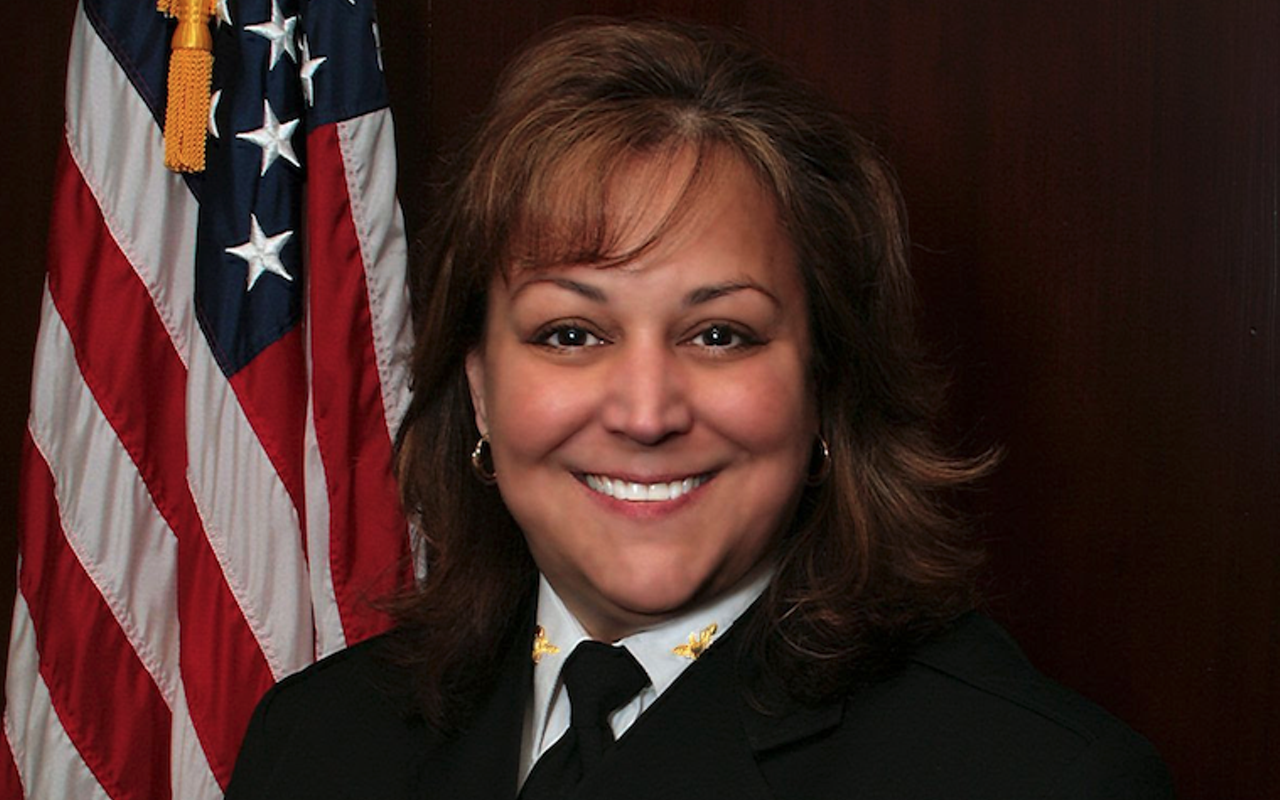 In 1995, a year after joining TPD, O'Connor was arrested for battery on a Hillsborough County Sheriff's Officer, a felony, along with obstruction and disorderly intoxication, both misdemeanors.

During the incident, she was riding with her now husband, Keith O'Connor, who was driving drunk. An HCSO officer witnessed him bounce off a median in his black Isuzu Rodeo before he was pulled over. According to a Tampa Bay Times article, Mary O'Connor, then 24, also was also drunk and refused to cooperate. When she was put in the back seat of a patrol car, deputies said she kicked the windows and punched a deputy in the chest and shoulder when he tried to calm her down. Six deputies responded to the scene to detain her.

A Tampa Tribune article referred to the incident as a "drunken brawl".

But the violent incident didn't keep Castor from making O'Connor her pick. "Mary O'Connor bleeds blue just like I do," she said.

In 1996, O'Connor was rehired on "last chance" status—just seven months after the violent incident. Her charges had been dropped. After spending the rest of her career moving up in the department, O'Connor told the Tampa Bay Times she retired  in 2016 to focus on being a mom.

But she got right back to work. Over the past five years, she's worked as a consultant for police departments across the country. O'Connor says she's helped improve department community relations, and implement evidence based policing as a Department of Justice special matter expert, and as a trainer with the FBI.


When asked at the press conference how she would discipline officers as chief considering her past, O'Connor told reporters, "discipline needs to be given in a fair and impartial manner" and "I believe in second chances wholeheartedly."

Bernice Lauredan of the Dream Defenders, a group that organizes against governmental corruption in Florida, told Creative Loafing Tampa Bay that discipline for officers like O'Connor is different than the way others are treated.


"I think it's very clear that a Black civilian would have received harsher punishment for battery on a LEO," Lauredan explained. "Mary should be held accountable for her violent behavior."


Lauredan went to say that she hopes the new police chief will not criminalize Blackness or poverty in the Tampa community.

Michelle Lambo, a Tampa defense attorney said she was "shocked" at the selection of O'Connor. Lambo represented Jamie Bullock, a BLM protester who was ambushed by TPD officers during a peaceful march and charged with battery on a law enforcement officer, despite zero evidence of the crime. The charges disrupted Bullock's life for over a year until, citing lack of evidence, the state attorney's office dropped the charges.

"O'Connor swore to serve and protect and if this is how she behaved when her fellow officers tried to make the streets safe from a drunk driver, then it is just unbelievable that she was selected," Lambo said. "I don't care how qualified she is."

Lambo said that while she does believe in second chances, the fact that O'Connor assaulted her fellow officers and wasn't removed from the force permanently was another appalling aspect of the story for her.

Creative Loafing Tampa Bay reached out to O'Connor for additional comment, and wil update this story if she gets back to us.


American history shows that law enforcement has a different experience in how they are prosecuted for crimes than average citizens. In fact, it is rare that officers are convicted of the highest crime of murder, even when there is ample evidence that an officer was in the wrong.

Meanwhile in Tampa, for years Black citizens were evicted before ever being convicted of a crime under Castor's now scrapped crime free multi-housing program, which O'Connor also oversaw when she was deputy chief and assistant chief. O'Connor was also deputy chief serving under then-Chief Castor  when another controversial program, "biking while black" which targeted Black bicyclists in Tampa, was exposed.


Today at the press conference, O'Connor said that since leaving TPD, traveling around the country advising other police departments has only grown her appreciation for the police department.

"I can tell you without a doubt that TPD is the best department in the nation," O'Connor said. "...But like with anything, we always have room to grow."

When asked about TPD's recent problems, like the crime free multi-housing debacle, the lack of power of the police citizens review board, and past controversies like biking while black, O'Connor put the onus on the community to speak up.

"I believe everyone has to come to the table and voice their concerns," she said.

St. Petersburg announces plans for Fourth of July fireworks celebration at the pier