In trial of Pasco BLM protester, state admits the only evidence of charges is testimony from cops

Marlowe Jones faces years in prison for battery on a law enforcement officer.

Since the day New Port Richey Police (NPRPD) charged him with battery on a law enforcement officer and obstruction, Jones has been dealing with sometimes overwhelming depression and anxiety. Even driving to the supermarket with his daughters puts him in fear for their safety.

All  this, despite prosecutors admitting to a serious lack of evidence that he committed the crimes, which could potentially put him away for six years in prison.

"The only thing I wanted to do was protect my city, help my city, let it flourish," Jones said. "We didn't do anything destructive."

Jones and other protesters in NPR held all peaceful demonstrations during the George Floyd uprising. They kept the movement non-violent despite being antagonized by white nationalist groups like the Proud Boys, who prayed with NPR police with during one protest. An NPR police officer also shared intel to an armed right-wing vigilante on where to locate the BLM protesters. Yet still, things remained peaceful, just like they intended. 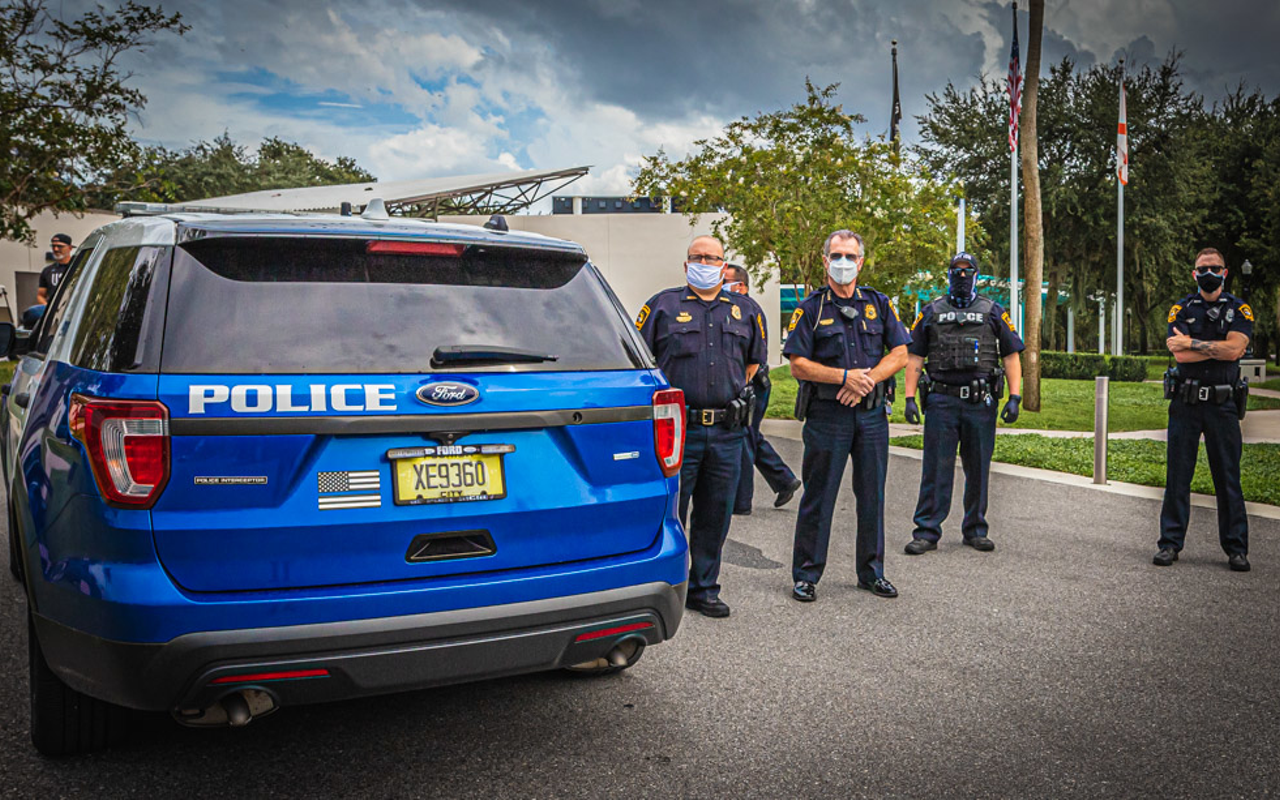 But during a march on July 24, 2020, events took an ugly turn when a man attacked a woman BLM protester.

Police intervened, during which time officer Nicholas Rickus claimed Jones refused to comply with his commands and pushed the officers' hand away. They didn't arrest Jones that night. Instead, police arrested him a week later during another protest on July 31, 2020, to accuse him of the crime and arrest him.

But last week, the Pasco state attorney who is prosecuting Jones made a surprising admission to Creative Loafing Tampa Bay: the only evidence the office of the 6th Judicial Circuit has in its pursuit of the charges against Jones is testimony from Officer Rickus himself and an undisclosed number of his fellow officers.

"The videos that have been provided do not capture the battery," Justin Homburg, the prosecutor for Jone's case told CL.

Homburg added that officer Rickus claimed he was not wearing a body camera that night, even though it is department policy, and his fellow officers were wearing cameras.

"But, you know, prior to any part of filing any felony case, we take sworn testimony to ensure that we're making the right filing decision," he said.

Jones' trial date was originally scheduled for today. Last week it was pushed back to May 4, after Jones' defense lawyer Andrew Darling presented five new civilian witnesses who were there that night.

When asked how many officer's testimonies there are besides officer Rickus', Homburg could not confirm the amount. He did confirm that as of now, the only witness testimony they have are from police officers.

This contradicts NPRPD Chief Kim Bogart's claim in 2020 that it took a week to arrest Jones because the police had to review video evidence and confirm that he committed the crime.

"Mr. Jones, first is tapping him on the shoulder, then turns away, pulls up his shirt, and makes this movement like he’s going to reach into his pants for a weapon," Bogart had claimed to WFTS in 2020. "Our officer reaches out, grabs his hand, and that’s when he started to push our officer."

Because the state attorney says that the only evidence they have is cop testimony, it is important to note here that time and again, it has been found that officers have been known to lie, and often follow a "Blue Wall of Silence" code in which they practice deceit to protect each other when they do wrong.

Jones believes he was targeted by NPR police, because he was seen as one of the leaders of the BLM movement locally.

"I'm trying to get people to peacefully protest. I'm not telling people to burn the city down," Jones said during the public comment portion of the city council meeting. "So why are they taking it out on me and making an example out of me and ruining my life?"

Jones spoke to council with a familiarity, because he knew them from so many meetings throughout the George Floyd uprising, where he and local social justice groups were trying to find what he called "common sense solutions" to the divide between the community and police in the area. He had even met with Chief Bogart in similar meetings, trying to find a cure to the problems between police and the Black and brown communities.

NPR PD didn't respond to questions about why they charged Jones a week after they claimed he committed battery on a law enforcement officer. They also didn't respond to the question of why Chief Bogart claimed there was video evidence, while the state attorney says there is not. NPR PD told CL Officer Rickus voluntarily resigned on Oct. 8, 2021 and was not under any internal affairs investigations.

Video from the night NPR police claimed Jones assaulted them shows officers responding to the scene of the fight. Jones is standing nearby, explaining to officers that the entire incident was on camera, and that the man had attacked the woman protestor. Police said the woman protester was legally carrying a concealed firearm and officers were trying to remove it from her. Jones stood nearby.

Officers ask each other what happened in one body camera video, while the activists try to explain that the man had attacked the protester. Patrick Oshnock, who had fought with the woman, claimed that he had been attacked by her.

Jones said he had tried to stop the altercation that night to keep the peace, and was explaining to police that the protesters were not responsible for the violence.

At no point did the police accuse Jones at the scene of committing the crime.

When asked why police would wait several days to arrest someone who assaulted an officer, Homburg said, "I don't know why they didn't arrest him, there could be a number of reasons why someone isn't arrested at the scene."

He directed the question to NPR police, who did not answer.

Despite the troubling lack of evidence, the impending charges have turned Jones' life into a constant struggle. He told CL that for the past year and a half, he's been dealing with mounting mental health issues, as he tries to still get through his every day life and support his family.

He's started seeing a therapist, which helps, but he just wishes what feels like a bad dream could be brought to an end.

"I'm having nightmares of getting killed by police," he said. "This whole situation is so insane."

Still, he hasn't stopped advocating for what he believes in.

"This isn't just about me," he said. "This is about finding justice in a system that treats people who stand up for justice this way." UPDATED 03/01/22 10:51 a.m. Updated when NPR PD told CL Officer Rickus voluntarily resigned on Oct. 8, 2021 and was not under any internal affairs investigations.

California Gov. Gavin Newsom urges Florida residents to move to his state 'where we still believe in freedom'