And a few other Tampa Bay buildings that escaped the wrecking ball. 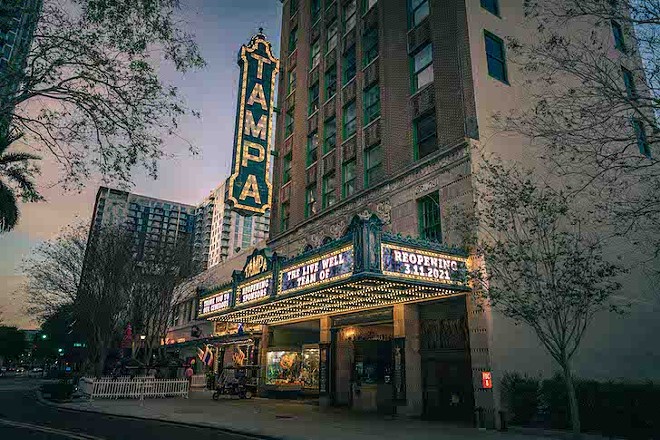 Javier Ortiz
There are plenty of historic preservation shit-the-bed moments in Tampa Bay.

In St. Petersburg, there are the La Plaza and Florida theaters, Huntington and Pheil hotels and even the old Webb’s City. Don’t forget how the Soreno Hotel was blown to hell for the credits of “Lethal Weapon III," too.

But there are plenty of wins, too. Here are a few to wipe away some of that cynicism swishing around your tear ducts.

As Tampa Bay closes out Historic Preservation Month, it's important to talk about sense of place: “Within the story of a city, you want to see the layers of history, the layers of development."

Tampa Theatre Across the street from Carolyn Wilson’s 600 block in downtown Tampa, this gem opened in 1926, but was slated for demolition by the mid-’70s, with folks for its destruction deploying much of the same reasoning used to rationalize demolition of old buildings today. Saved by citizens and the Arts Council of Tampa-Hillsborough County (with much credit to then Councilman Lee Duncan and late mayor Bill Poe), I’d like to see someone suggest tearing Tampa Theatre down these days.

The Scrub “The Harlem of the South” was a place where Central Avenue hosted Ray Charles, Ella Fitzgerald and Cab Calloway. More than that though, The Scrub was a Tampa neighborhood built by free slaves after the Civil War. By the ‘50s, however, the neighborhood was more or less obliterated in the name of urban renewal (a 1951 “Report on the City Plan of Tampa, Florida” called The Scrub “one of the most insidious and cancerous infections in the city”).

But early this month, Paul Guzzo reported that the Tampa Housing Authority, a driving force of that “renewal” is doing the tiniest something after purchasing The Scrub’s last residential homes on Scott Street, which will be restored and then surrounded by possibly a dozen affordable housing units. St. James Episcopal Church, just a couple blocks away, is being fixed up, too.

The Vinoy You wouldn’t know it today, but St. Pete’s Vinoy hotel saw some dark days. The Vinoy, once barracks for soldiers during World War II and set for demolition in the ‘80s, was saved by locals like Anet Willingham who were adamant about its historical significance and contribution to a sense of place. University of Tampa Opened in the late-19th century and once a Gilded Age wonder of Tampa, the Tampa Bay Hotel was a destination before effects of the Great Depression forced it to close in the ‘30s. Furniture left there was looted, and the casino and boat house burned down. Considered an eyesore, city officials leased it to Tampa Bay Junior College for next to nothing. Now it’s the University of Tampa—and very hard to imagine the Hillsborough River without those minarets.

Franklin Exchange Once the tallest building in Tampa—and doomed for demolition in 1999—Carolyn Wilson has been behind the restoration of this block that includes the 1923 Exchange National Bank, attached to an annex and tower now home to a myriad of office tenants (including Creative Loafing Tampa Bay) and C.W.’s Gin Joint. And yes, there was once a newsstand on the corner of nearby Williams Corner on Franklin and Zack Streets.