‘The national spotlight is on us.’

Within the story, the tale of Tampa’s interstate project is retold, but from a new perspective.

“The first time Willie Dixon lost a home to a highway was during the freeway construction boom in the early 1960s,” The L.A. Times wrote. “The delivery driver was living in a one-story wooden home in Tampa where he and his wife would host card games for family and friends, cooking feasts of blue crabs.”

The problem Dixon faced was that his home was right in the path of what would become I-275. The interstate plowed through historically Black and Brown neighborhoods in Ybor City, West Tampa and downtown Tampa, displacing thousands, including Dixon.

Dixon moved and started his life again, but in an unfortunate location. His second home was right in the path of what would become known today as malfunction junction. In 2004, he was removed  from his home again for an interstate expansion at the age of 90. He died a year later, according to the L.A. Times.

His story is one of thousands in Tampa, where for decades the story of racist interstate plans have been a source of controversy. Similar displacements happened in Miami and Jacksonville, where people of color were pushed out of core urban areas and segregated by interstates.

When the L.A. Times asked the Florida Department of Transportation for comment on the project, they repeated a time-tested response to the concerns of racism and segregation.

Highway planners insisted that freeway expansions are not intended to harm communities of color. Building upon existing road corridors that were there at the time I-275 was built in Tampa was less harmful to people and to the environment than creating brand new ones, they claimed.

“The only way to eliminate displacements for the interstate projects in Tampa would be to do nothing and continue to utilize the 1960s interstate system,” Florida Department of Transportation spokeswoman Alecia Collins told the LA Times. “At the rate that Florida is growing, that simply isn’t a safe and/or viable option.”

Tampa’s historical documents show that the city saw the area that I-275 would run through as “cancerous.” About six years before I-275 construction would begin plowing through the Black neighborhood between Ybor and Downtown formerly known as “the scrub”, the City of Tampa said of the area, “The reconstruction of the area for improved living and additional commercial and industrial enterprise will remove one of the most insidious and cancerous infections in the city.”

c/o Josh Frank
Tampa’s historical documents show that the city saw the area that I-275 would run through as “cancerous.”

Josh Frank, an urban designer and founder of #blvdtampa—a project study to turn Tampa’s interstate into a more efficient and community-friendly Boulevard that includes public transportation— said that FDOT is going back to the same argument it’s made for about 70 years.

"You won't find it directly written in any letters or memos, but the creation and further expansion of the interstate system in Tampa has always been discriminatory towards minority neighborhoods,” Frank told Creative Loafing Tampa Bay in an email. “Continuing this impact with a shrug is, as the L.A. Times article clearly demonstrated, a choice continually made by the Florida Department of Transportation since the 1950s.”

Frank went on to say that there has been progress in that time to reduce impacts or mitigate them more fairly, however, the end result is still largely an inequitable one.

“And that is the definition of systemic racism,” Frank said.

Governor Ron DeSantis had different feelings about road construction on Tuesday. When a reporter in Spring Hill asked DeSantis about Pete Buttigieg's infrastructure bill that seeks to address systemic racism in highway design, the Governor largely deflected, but not without taking a swipe at the bill.

“I heard some stuff, some weird stuff from the Secretary of Transportation trying to make this about social issues,” DeSantis said. “To me, a road’s a road.”

DeSantis comments seem to ignore the fact that people build roads, and decide where they go and how they are built. And as the Orlando Sentinel editorial board noted, "Racism in road building isn't weird, it's real."

Sunshine Citizens, a coalition advocating for smarter transportation policy, pointed out that there are options outside of interstates that destroy and divide communities.

“We need transportation equity, to put people first and prioritize funding for transit now,” the group said in an email. “Advance the #blvdtampa project study, funding HART, streetcar expansion, & everything else instead of folding to the continuing highway expansion. The national spotlight is on us." 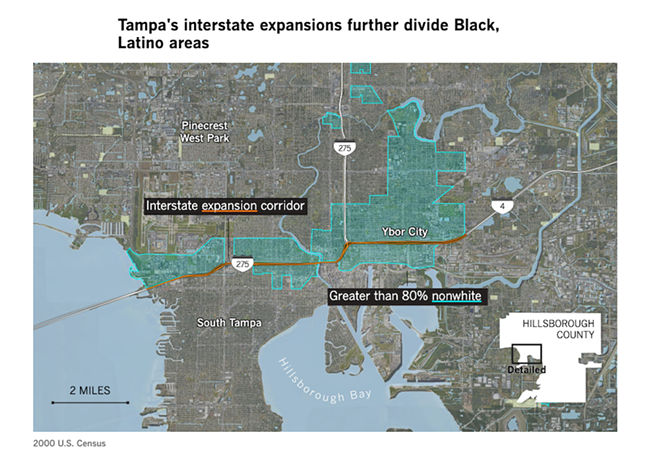