Half human, half wolf and all fantasy: live-action role-playing at USF. 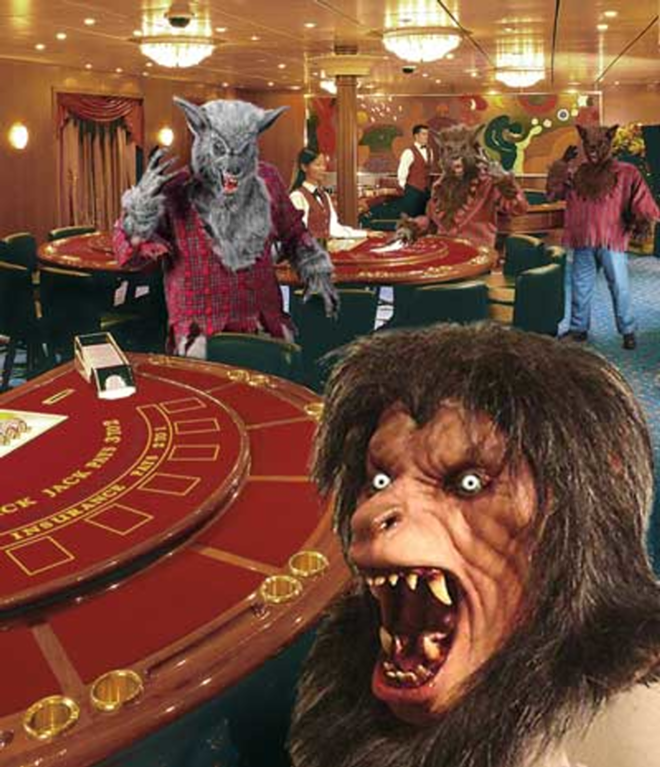 Werewolves have taken over the Seminole Hard Rock Hotel and Casino in Tampa.

Up to nine feet tall in their wolven state but regular size when human, these werewolves are making long-shot bets to save the Earth, or Gaia as they call it. The Hard Rock serves both as a gambling sanctuary and spiritual wolf den.

OK, so that's the fantasy story. The real story is this: There's a group of folks who hang out at the University of South Florida campus every weekend taking part in live-action role-playing, aka LARP-ing. The group has about 65 members, but usually about 20 to 30 show up on the Friday or Sunday nights when they play, said Marc Luthi, 31, who is a director of sorts for the USF game.

Live-action role-playing is kind of like Dungeons and Dragons come to life. Instead of sitting at a table and fantasizing about a fictional Hobbit character saving the world with his plus-3 dagger of death, gamers move around a stage (in this case the Marshall Center plaza). They act out their roles, becoming werewolves in body and soul.

Though the role-playing takes place at USF, the make-believe settings are an invisible island called Falcon Claw in Tampa Bay and the Hard Rock casino, picked because, according to the fantasy, the Seminole Indian land has a spirit that communes with the werewolves.

Robin Shaw is a 20-year-old sophomore majoring in biology at USF. In her fantasy life, she is a young werewolf named Loki.

"She is a hippie. An anime-loving hippie. She doesn't like to get her claws bloody," Shaw said, describing Loki. "I love it. It just gives me a chance to be someone else."

On a recent Friday night, Shaw showed up to the Marshall Center around 7:30 p.m. She wore blue jeans, a white T-shirt, wire-rim glasses and a red hooded jacket that looked a lot like the cape worn by Little Red Riding Hood. And we all know what happened to Red Riding Hood. (More on that later.)

Before you dismiss Shaw and her fellow LARP-ers as a bunch of geeks, consider this: Active fantasy can actually be healthy for adults. Remember playing cops and robbers as a kid? You need that, says Nina Garcia, a psychotherapist who runs several psychodrama groups in New Jersey and Florida, including one here in Tampa.

Psychodrama as therapy was created by Jacob Moreno, a Romanian-born doctor who believed acting could help people in group therapy sessions, not only to heal, but to free adults to be creative and spontaneous. Moreno died in 1974, but his philosophy lives on.

Garcia said Moreno was concerned that television and computers would lead to adults turning into zombie-like automatons. So, live-action role-playing, even a game like the one at USF that imagines plenty of death and destruction, can be healthy as long as no one actually gets hurt.

"They're doing this because they enjoy themselves," Garcia said. "It's certainly more active than watching TV."

There were about 20 players at the Marshall Center on a recent Friday. About half were USF students, the other half folks with families and jobs. For example, the game's director, Luthi, is a father of two who sells COBRA insurance plans to corporations.

Some said they were attracted to LARP-ing because they tired of playing Dungeons and Dragons in their parents' basement. Others said they missed the days of high school drama club.

"I came because I was told it was improv acting," said Nikky Tinker, 22. In her real life she is a pharmacy technician and mother to a 7-month-old boy. In her fantasy life she is a werewolf called Hands of Artamus.

"It's nice to get a break," Tinker said.

The action started around 8:30 p.m. Shaw, a.k.a. Loki, the hippie werewolf in a Red Riding Hood cape, tried to intervene in a heated battle between two werewolves on the make-believe island. As the peace-and-love werewolf, Shaw saw it as Loki's duty to stop them.

Shaw, who looks like she is about 100 pounds and maybe 5-foot-2, stepped up to the two men: 6-foot-5 Roshaun Heslin, 23, and a 6-foot plus guy pushing 300 pounds (who wouldn't give his real name and asked that his picture not be taken).

Heslin's character is a dark, brooding werewolf named Christian. He was obviously annoyed with Shaw, who started her intervention by throwing an imaginary pillow at the battling werewolves.

In about 15 minutes, the two men had beaten up the character Loki pretty badly. In reality, they hadn't laid a hand on Shaw. One of the rules of the game is no touching. Weapon props aren't allowed, either. The fight is enacted through narration and pantomime.

At the climax of the battle, the heavy-set player announced that he was going to tie the pillowcase over Loki's head and smash her against a tree, and then pretended to do just that. That's when the character Christian declared he was going to fight back with a torch. Instead, Loki was enlisted as a human shield, and her character burned to death.

Shaw marched away from the two men and informed a director that her character had been killed. Word spread, and as other players scurried around, the death was incorporated into the story. One young woman, Adrianne Benfield, 20, cried. Others held two fingers to their temples, indicating they were talking telepathically in "pack speak" (but actually communicated via whispers).

The loss of Loki became a major turning point in the story, causing a guiding spirit at the Hard Rock casino to abandon the werewolves. In turn, the werewolves turned on their leader, Autumn, played by Amy Whitlock, a 34-year-old mother of two and former Dungeons and Dragons fanatic. In the end, Autumn lost her position as Alpha wolf. "It's like a big soap opera," Whitlock said.

And Shaw, who was killed by the big, bad werewolf? A sympathetic game director resurrected her character. Like many of the players, she had invested hours into thinking about and playing her character; she'd played Loki for more than a year.

"I felt sad, like a small part of me died with her," Shaw said in an e-mail after the game. "When you become these characters you can't help but become attached to the good points and bad points that make the characters unique. I can tell you that now that she has been to the brink of death, she has a lot of growing up to do."