7 questions with Poppy Drayton and Will Moseley, stars of live-action The Little Mermaid. 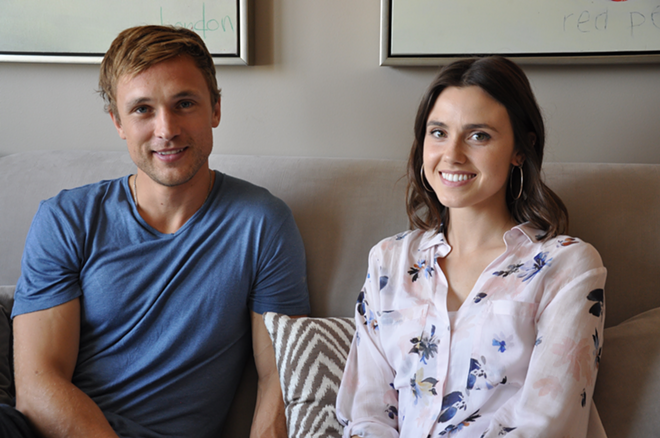 CL recently had the opportunity to talk with William Moseley and Poppy Drayton, the two leads in the new indie live-action production of The Little Mermaid.

The movie is essentially a Steinbrenner/Kingsway family production, as the lead producer is Rob Molloy, grandson of the inestimable George Steinbrenner.

Molloy grew up in Tampa and is excited to make his first indie film —  and is already planning the next one. With the family connection to the New York Yankees, it’s not surprising to hear that Molloy is hoping to lens a biopic of Lou Gehrig based on the Jonathan Eig biography, Luckiest Man: The Life and Death of Lou Gehrig. Molloy commented that his grandfather loved theater and movies, a showman and entertainer himself who always laughed at the way he was portrayed on Seinfeld.

At the recent gala premiere of The Little Mermaid at Tampa Theatre, the Steinbrenner family was out in full force, as was a huge appreciative audience garnered by the Tampa Film Commission, plus fully costumed mermaids from Weeki Wachee and marching penguins from the Florida Aquarium.

Beforehand, CL sat down with Moseley and Drayton, young and British and charmingly self-deprecating, to discuss their new movie. The movie is inspired by the 1837 Hans Christian Andersen fairy tale rather than the Disney animated film. It follows a young girl (Loreto Peralta) and her uncle (William Moseley) who travel to Mississippi to uncover a legend and a promised magical elixir, along the way discovering an enchanting woman (Poppy Drayton) who may be the real “Little Mermaid” of lore.

The film opens wide at AMC Theaters on August 17.

All the underwater sequences were filmed at Weeki Wachee. How did that go?

We got to meet professional mermaids and swam with them in the gorgeous springs. They gave me tips on how to maneuver with those massive tail fins that are part of the prosthetic costume. Actually, once you’re in the water, they’re quite buoyant and easy to use. Hard to get on with lots of tugging and pulling and lubricating cream, but easy to swim in. I practiced my swimming for months beforehand at my local leisure center to get down the fluid flow, then practiced holding my breath for longer and longer periods. I learned not to be afraid of the water, just let go. It’s very calming to be a mermaid. I hoped to see manatees at Weeki Wachee, but we didn’t, though I did have fish and turtles following along behind me.

There have been so many versions, animation and live action, with even more in the planning stage. What’s the appeal of the little mermaid’s story?

Moseley: It’s all about imagination and fantasy. It’s a PG-friendly family film but plenty for adults to enjoy too. It’s a story about thwarted love, inter-species love if you will, and the message behind the film is lovely: Believe in something, even if fantasy, because adults can get so swept up in cynicism, in not believing, but we need fantasy too. I loved the magic of the traveling circus that’s a part of the film — they brought the entire circus set from Los Angeles that had been used in the movie Water for Elephants to Savannah where we shot the interiors — and wished that we had been able to use that set even more in our filming. I love the fantasy world, love the Narnia movies (he’s been in three of them), and The Little Mermaid is very Narnia-like.

Drayton: Most girls want to be mermaids, so I was thrilled when I got the opportunity to play this role. This is a beautiful, sweet, charming story and the Blake Harris screenplay really does combine fantasy and adventure, with just enough threat and danger from the evil, mustache-twirling circus manager to keep things interesting.

The movie defies everything you have always been told not to do in making a movie: no children, no animals, no historical period piece, no water, and surely no mermaids. What were the challenges?

For sure, the movie has all of these. There were difficulties with this combination, but the rewards were massive. It is an ambitious project and we were up against the original Hans Christian Anderson, then the original Disney animation too, and all these other competing versions, including the planned Disney live-action with music by Lin-Manuel Miranda and Alan Mencken, and another live-action version by Universal. But we made ours first and got it out of the gate first. Filming at Weeki Wachee was so much fun, and filming in Savannah was beautiful too. Much of the crew in Savannah were part of SCAD (Savannah College of Art and Design). Savannah gave us location shots for this historical look we were after. The circus elephant sort of slung me around when we first met. Florida had beautiful sunsets we could use when we filmed in Weeki Wachee. But the thunderstorms and lightning in Florida were scary. (Moseley was struck by lightning on the movie shoot for The Silent Mountain.)

How important was your role of the cynical reporter, Cam Harrison, to suss out the truth behind the magician’s elixir and the mermaid’s story?

Yeah, I hear the term “fake news” a lot in America. I loved playing the reporter (who’s also the uncle of the ill niece who’s so intrigued by mermaid life). He’s on a journey of discovery. And it’s through his eyes as an investigative reporter that he becomes the audience’s eyes and ears too. The questions he asks to discover the truth are the questions the audience has about it all. He starts out cynical and becomes a believer, not in the elixir but in mermaids.

Why was the working title Little Mermaid of the Mississippi? What role does Mississippi have in this movie?

Well, the movie is set in Mississippi but filmed in Savannah. Apparently, there is no longer any tax incentive to film in Florida. The mermaid act in the traveling circus is called Little Mermaid of the Mississippi because the writer Blake Harris wanted to evoke the Huck Finn adventure and journey of transformation. There’s something exotic and mysterious about the South and the Mississippi River. That journey of change certainly happens here in this movie, but I think it was ultimately decided to go with the simpler The Little Mermaid title. Harris has said that he's especially interested in writing aspirational stories for girls because he thinks girls don't get the attention they deserve in adventure-fantasy stories.

So, a film set in the American South has two leads with British accents (Moseley has acted in Narnia films and Drayton's been in Downton Abbey). What’s that all about?

What are the final messages you think the movie is offering the children who will see this film?

We want everyone to feel and believe the magic that’s offered here. The story evokes magic and fantasy. But we also want children to believe in themselves. Believe in your stories. Tell your own stories. Take out your iPhone and make a movie. Don’t let anyone tell you that you can’t. It’s OK to chase your dreams. Go for it. You’ll never regret it. Actors want to tell a story too, so acting is great fun as we help people feel something as they watch the movie. 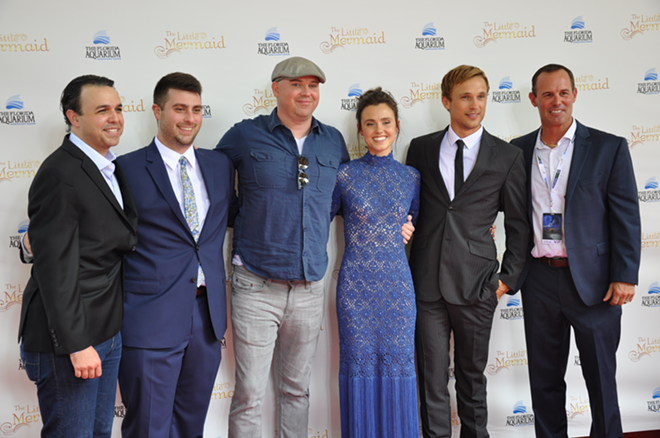