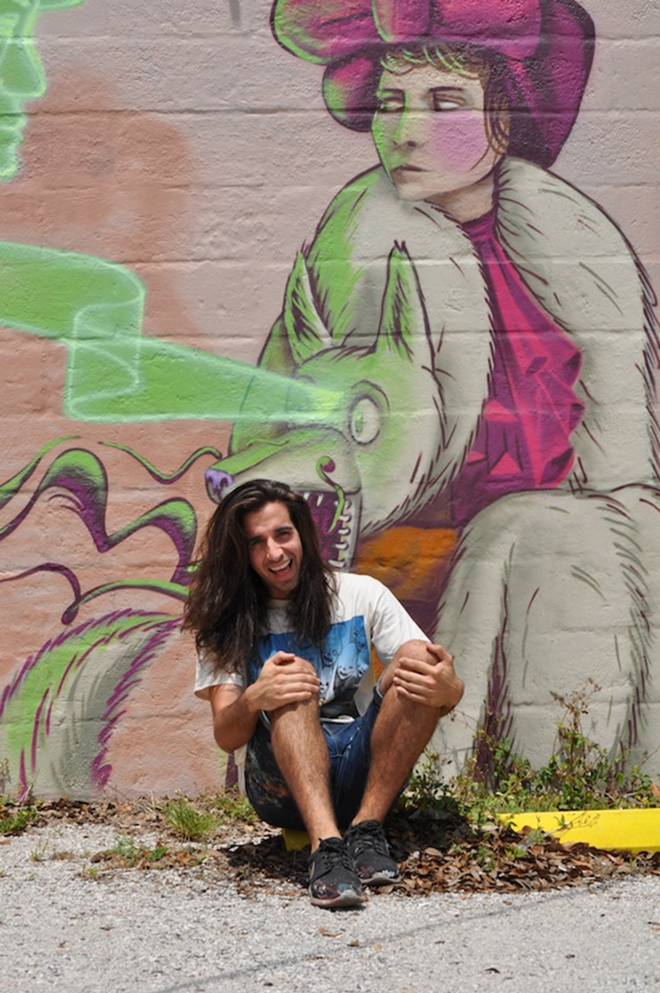 
Sebastian Coolidge’s impressive body of work spans St. Petersburg office buildings, cafes, shoe stores, barbershops, alleys and roofs. Chances are you’re more familiar with Coolidge’s street art than you are with Coolidge. The 25-year-old artist does the majority of his painting at night. Although most of his murals are big, bold and attention-grabbing, Coolidge is soft-spoken and shirks the limelight.

His style can be dark and surreal or light and whimsical. Most of his high-visibility murals line downtown St. Pete’s 600 Block, but one of his most well-known designs wraps around the corner of MLK & 1st Avenue North: a kid in a newsboy cap with long outstretched arms squeezing an orange on the storefront of Freshly Squeezed, a clothing store. Coolidge says when he painted that mural in 2012 it started a chain reaction of commissioned work.

A native of Kansas City, Missouri, Coolidge moved to St. Pete six years ago. He was looking for a change of scene, and his aunt lived in the city. He enrolled in classes at St. Petersburg College, but dropped out his first semester to pursue a full-time living as an artist. His first two years were rough. He and his friend, fellow painter Elijah Barrett, would scavenger used paint from dumpsters and offer to paint murals on downtown businesses in exchange for food, money or clothes.

Now he’s one of the hottest artists in town, and does commissioned work for private homes as well as exterior murals for businesses. This past spring he pumped out two dozen murals, including a giant face on an industrial silo near Woodlawn Park that’s visible from I-275. In April, he and his girlfriend, yoga instructor Brittany Cavener-White, had their first child, a daughter named Lillabelle.

Where he gets a good buzz: The Bends. “That’s the ol’ hometown bar. When it first opened, my go-to drink was the Cucumber Creeper, but I got creeped out on it too many times, so now it’s the Singapore Sling.”

Where he eats brunch: Café Alma. “The banana foster French toast is amazing, as is the full bloody mary bar.” [Editor's Note: Since our interview, Alma has moved from downtown St. Pete to John's Pass in Madeira Beach.]

Where he orders takeout: Bodega. “I love that place at lunchtime. The Cubans, the Cortaditos… It’s perfect.”

Where he brings his girlfriend: Leafy Greens Café. “She’s a vegetarian, so that’s her favorite spot. Her favorite thing is the Bunny Love smoothie. I’ll get a Tuscan pizza. It’s not your typical pizza.”

Where he wants to paint a mural: Walker-Whitney Plaza. “It’s got a 15-story blank wall. I’m dying to cover it with some giant character from out of my head.”

Where he slams a sandwich: Lonni’s Sandwiches. “I painted a mural at Lonni’s. One half of the job was paid for and the other half went toward my tab. I lived off Sunny Bird and Mango Breeze sandwiches for a month and a half.”

Where he likes to blow his money: The Melting Pot. “It’s a splurge for sure. The last time I went was probably after I got paid from a job. We went for the whole experience. I’ve loved Melting Pot since I was a kid. The whole hands-on experience is awesome. Melted chocolate is awesome.”

Where it’s Thanksgiving every day: Central Perks Café. “The Thanksgiving Sandwich is so good. It’s like stuffing, cranberry sauce and other Thanksgiving goodness. Also, [owners] Mel and Robin are two of the most beautiful people I know inside and out.”

Who he idolizes: Late artist Bill “Woo” Correira. “He is still an inspiration. He believed in me when I didn’t believe in me, but I think he made everyone feel that way.”

Who deserves your attention: Steven Kenny. “He’s so local, but so global in his work. He’s definitely going to go down in history as one of the great (neo) surreal oil painters of his generation. His work has a Renaissance vibe to it. It’s soft and warm like the Old Masters.”

Who cuts his trademark locks: VLVT Salon. “I don’t get it cut often, but when I do I go see the beautiful people at VLVT on Central Avenue. [Co-founder] Albie [Mulcahy] is top-notch for the area. He’s a dry cut master.”

Where he scores cool clothes: Freshly Squeezed. “I did a mural there and they paid in straight clothes. I got this pair of weed socks that I love. The guy who owns it, Gary, is great. If you’re looking for a good laugh and a chat, see Gary.”

What he suggests you do at least once: Take a helicopter tour of St. Pete. “It’s an awesome way to spend $100. Buzz over the beaches, and while you’re up there check out my mural on the roof of ZaZoo’d [on Central Avenue].”

Where he goes to escape the concrete jungle: Weedon Island Preserve. “Kayaking the mangroves is a fun adventure. You can get lost from humanity and feel at peace with nature in there.”