Born in Dartmouth, Mass., Correira moved to St. Petersburg in his childhood, during the Jimmy Carter era of 1976. The graphic artist was influenced by his father William Sr., a well known scrimshaw artist. Correira's work mixed granite and marble with a focus on figure studies and marine life.

In addition to being a founding father of the 600 Block scene, Correira supported environmental causes by donating many pieces of his work to nonprofits to assist in fundraising efforts. His work is held in many private collections.


The 43-year-old gallery owner was not only known for his vivid sea life paintings, his love of community and DIY spirit led to many friendships and alliances. He was instrumental in the district becoming the cool, vanguard landmark that it is today, participating in live painting events and other events that involved interactive creativity and furthering St. Petersburg's imprimatur in the arts.


"RIP Bill Correira Woo. You are always going to be my mentor. ... What I learned from you is unteachable and I credit YOU for putting my life in right direction. I love you, man!" Saint Paint owner Derek Donnelly, a close friend of Woo, wrote the on the artist's Facebook timeline.


Another sweet testimony to his legacy was encapsulated in a tribute tacked to the window of Gallery Woo after his death: “There are many fish in the sea but only one Woo.”


A gathering will take place in Woo's honor today at 400 Beach Seafood House, on the corner of Fifth Avenue North and Beach Drive, from 5 to 7 p.m.


Memorial services for Woo will be held tomorrow at 1 p.m., at the First Baptist Church of St. Petersburg, 1900 Gandy Blvd., St. Petersburg. In addition, proceeds from the monthly Saturday Indie Market, from noon to 6 p.m., will go to Woo's mother.


Be sure to head to the 600 Block on Dec. 8 to participate in a tribute to the local arts hero. The final unveiling of a mural dedicated to Woo will take place 5-7 p.m. at the alley between Central and First North on Sixth Street, near The Collective Tattoo and Gallery. Members of the community are invited to hand-print coral and aquatic life surrounding an image of the artist. Those wishing to donate paint or supplies are asked to visit Saint Paint or one of the businesses in the Crislip Arcade if the gallery is closed. 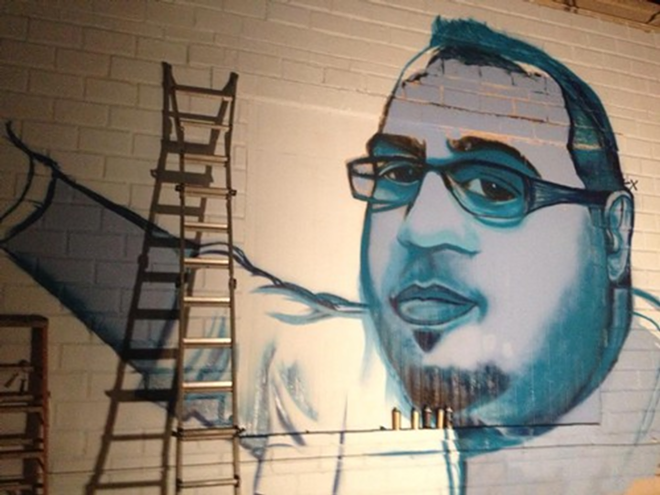 The story behind Bill Correira “Woo”’s nickname-surname conveys the fun-loving spirit that endeared him to many. According to Jon La Budde, owner of Jonny Reno’s: “He was sitting in the courtyard at the old Big Catch [a ‘90s hotspot] on First Street when a car load of girls came by and yelled “Woo!” and may or may not have flashed him. For some reason, others around him thought his name was ‘Bill Woo’ and it stuck; true story.”

The artist/gallery owner of Gallery Woo, on the 600 Block of downtown St. Pete, died after a five-year struggle with brain cancer on Nov. 26. He created his iconic fish until the final moments of his life. After his last surgery, he was told that his motor skills would be too impaired to paint, but he proved the doctors wrong.