BookStories: Joseph Campbell as your GPS

Bus, book and baggage as vehicles of enlightenment. 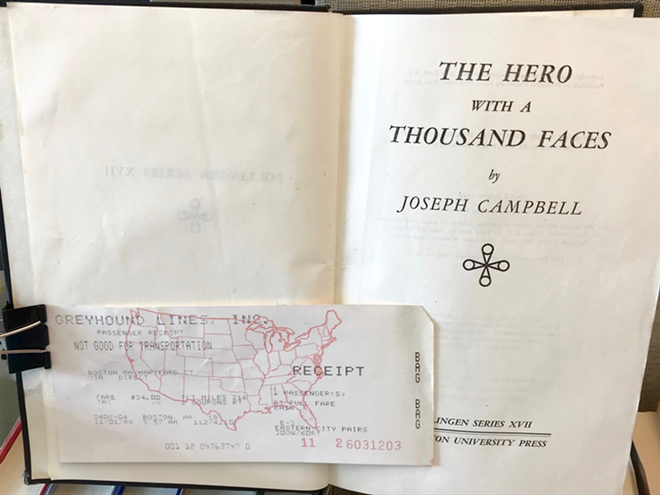 Ben Wiley
The Hero with a Thousand Faces and the bookmarked baggage receipt from November 1, 1988

Thumbing through a bookstore copy of Joseph Campbell’s classic, The Hero With a Thousand Faces (first published in 1949), I discovered a bookmark. Now, I find bookmarks in our used and donated book offerings all the time — sometimes a prayer card, a Jack of Diamonds, or a corner of a Burger King paper menu, maybe just a flattened foil gum wrapper — but here in Campbell’s seminal work of comparative mythologies was a yellowed and faded receipt. Campbell said that worldwide myths share something fundamental, which he called a monomyth, and that what they all have in common is a Hero who goes on a quest, experiences defeat but ultimately triumphs.

“This hero ventures forth from the world of common day into a region of supernatural wonder: fabulous forces are there encountered and a decisive victory is won: the hero comes back from this mysterious adventure with the power to bestow boons on his fellow man.”  This monomyth of the hero and the quest applies equally to Odysseus, Hercules, Moses, Jesus, Beowulf, Capt. Ahab, Huck Finn, Luke Skywalker and countless others. Indeed, these myths provide a roadmap for navigating the frustrating paths of contemporary life.

Which brings us back to the yellowed and faded receipt. It’s a luggage receipt # 11-26031203 for a Greyhound Lines bus journey, 1 passenger, RT-Full Fare $34, from Boston MA to Hartford CT (just slightly over 100 miles), departing Boston at 8:57a.m. on 11/01/1988, not the ticket itself, as it’s clearly marked “not good for transportation.” The passenger’s name is not identified. Of course, finding a luggage receipt in a book on the Hero and the Quest provoked many questions: Who is this passenger? What heroic journey did he (or she) go on? What did he think while reading this particular book on the bus, the miles passing before his eyes as he conjured up his own heroic roadmap? What quest compelled him to go from Boston to Hartford on a Greyhound on this cold, blustery day? What supernatural wonders, fabulous forces, decisive victories, mysterious adventures did he encounter? What happened in Hartford? Was there a return to Boston? At the end of the journey, defeated or triumphant? Did Joseph Campbell validate his quest, putting this traveler in the camp with Odysseus and Hercules, or merely remind him of his fruitless dreams and empty searches? Which of the thousand faces does this unnamed hero have? Perhaps this heroic passenger was a woman with a quest of her own self-determination.

And what was in the luggage?

As Campbell observed, “The latest incarnation of Oedipus, the continued romance of Beauty and the Beast, stand this afternoon on the corner of 42nd Street and Fifth Avenue, waiting for the traffic light to change.” This time, the quest took place between Boston and Hartford. Our intrepid wanderer with the checked baggage experienced the heroic incarnation on a Greyhound bus bound for grief or glory.

Ben Wiley, one of our Creative Loafing film reviewers, is also an advocate for paper and print. Dead trees, if you will. He volunteers at a local library bookstore and enjoys engaging with readers and their books. Our series BookStories will highlight some of these Ben, Book & Beyond encounters.