The promise of baseball and a community lost. 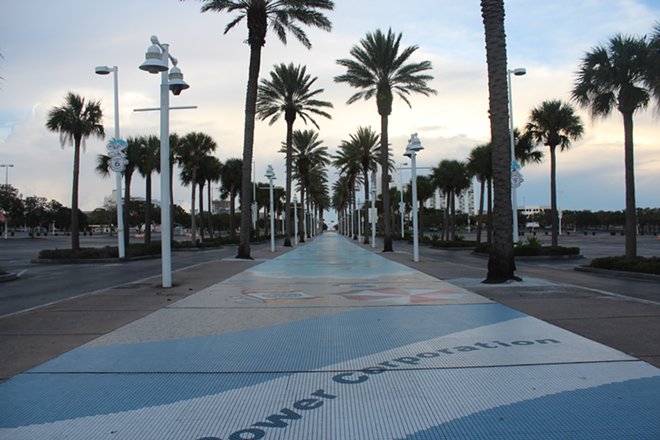 Julie Armstrong
Power to the Corporations! Rays mosaic walk, over the once bustling 3rd Ave. South.

His after-school route took him through the heart of the razed St. Petersburg neighborhood. Immaculate Conception, off 16th St. S., let out at 2:30. His aunt picked him up after school, drove east down 3rd Ave. S., and kept him at her house on the corner of 9th until Sanchez's parents got off work.

In the 1980s the city leveled the buildings and homes in Gas Plant to make room for a domed stadium. Sanchez, now 58, remembers the candy store across from his aunt's house (by today's "Urban Style Flats"). He attended McCabe Methodist Church, one block south. Now it is a parking garage.

Sanchez left Florida for 25 years, working around the country as a funeral director, then returned to a rejuvenated St. Petersburg.

To get a handle on the Gas Plant neighborhood, through Sanchez's eyes, I retraced his after-school route on foot.

My problem started with parking. I looked for a spot by Immaculate Conception, now a retention pond for John Hopkins Middle School. A wrong turn took me down 5th Ave. S., forcing me to circle 12 blocks around Campbell Park.

The dead ends and one-ways have a history. In the 1970s the interstate destroyed the street grid. Then eminent domain was declared over the Gas Plant neighborhood. Promising light industry, then jobs through a stadium, the city took out 285 buildings and 500 households, at a cost of $11.3 million.

Along with my wife (and photog) Julie, I started my walk at the old St. Augustine's, a black Episcopal church founded during segregation, one of nine congregations relocated in the early 1980s.

We passed the yellow brick Perkins house, once home to the revered family of educators. Traffic hummed across the 175 overpass. Enoch Davis's church, Second Bethel Baptist, sat here. The Welch family, including David (the second African American elected to city council) and County Commissioner Ken Welch, can trace their roots to a wood lot on the corner.

At a traffic light, what used to be 3rd Ave., we approached the empty dome. The only signs of life were rat traps. Julie Armstrong
First the interstate, then a stadium. Failed efforts at "urban renewal" loom over the old neighborhood at 16th St. South.

I have watched baseball on three incarnations of artificial turf at Tropicana Field. I never thought about the neighborhood underneath. The infield (if my research is correct) sits on the former site of Selena's Beauty Salon.

On the dome's east side, we picked up the remnants of 3rd Avenue, now a mosaic sidewalk with random tiles missing.

How do we honor these memories?

But the plan caters to profits. The city's pitch to the Rays makes no mention of black-owned business or affordable housing. It will restore the street grid, but not across the interstate, leaving the racial divide intact.

The amnesia infuriates, because the Gas Plant story is on record. USF St. Petersburg and the St. Petersburg Museum of History house archives. The stadium's construction has been the subject of books, newspaper articles, even a dissertation.

Yet the 2016 proposal, an item in the current mayoral race, ignores a history hiding in plain sight.

Promises of "Equitable" are anything but.

Return to the scene of the crime. In May 1982 newly-elected David Welch challenged the city council. "When you went into this area and moved out all the people," Welch said, his voice rising, "you said you were going to rehabilitate." He reminded leaders of their "moral obligation" to business owners and residents forced to leave.

Twenty-five years later, granted, not everyone has suffered. Churches moved. Many residents found nicer homes in leafier parts of town.

But a consensus is clear. Community was lost.

The neighborhood has cratered.

Julie and I walked down MLK, past the old McCabe site, pausing at the highway spur.

Evening fell over the Trop. The dome was dark, shadowed by 60+ acres of empty lots. Traffic barreled over the former homes of teachers, doctors and attorneys, once the core of St. Petersburg's black middle class, on 5th Avenue South.

Rarely do cities get a shot at redemption. As the Rays mull over stadium sites, the city should also ask, how do we heal our wounds?

Any real future honors the past.

What kind of community will we call home?

[Editor's Note: City Wilds will go on hiatus until January 2018, as Thomas Hallock finishes a book. We look forward to reading his future adventures.]

Thomas Hallock is Professor of English at the University of South Florida St Petersburg. He is currently writing a book of travel essays about why he loves teaching the American literature survey, called A Road Course in American Literature...
Scroll to read more Local Arts articles