In Tampa, Jobsite's Halloween show Edgar and Emily brings A-game acting, but the script could be better

If the script were as good as the acting, this show would thrill. 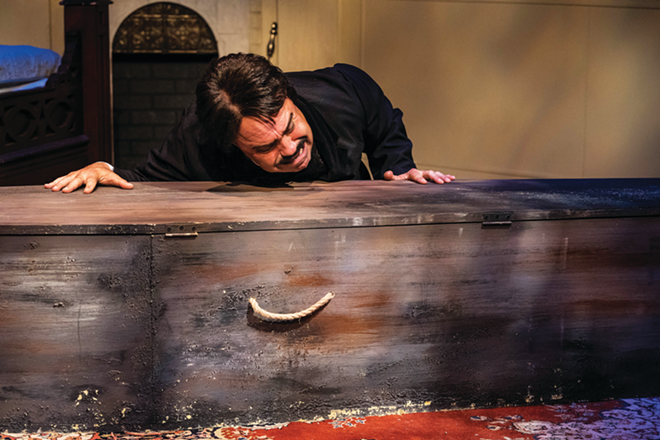 Pritchard Photography
THAT’S SO RAVEN: Edgar Allan Poe as comedy? Sure, why not?

Edgar Allan Poe and Emily Dickinson are — in some ways — the most mysterious of great American writers. Poe’s mystery is his work: How did these tales of horror and the supernatural, murder and plague emerge from the bright, boisterous U.S. society of the mid-19th century? Dickinson’s mystery is her life: How did an agoraphobic woman who seldom even left her room manage to write 2,000 poems, many of them brilliant and revelatory, of life on the outside?

It may be too much to ask playwright Joseph McDonough to solve these enigmas, but since he dares to put both figures on stage in Edgar & Emily, he might at least offer some theories. After all, we theatergoers want to feel that the characters in front of us are coherent, regardless of their source. If we’re going to spend 90 minutes with Poe and Dickinson, we can be forgiven for wanting to know them better by the final curtain.

McDonough partly succeeds with Dickinson and doesn’t make sense at all of Poe, in spite of fine acting from Katrina Stevenson and Paul J. Potenza. These two actors could probably make the listings on eBay entertaining: In his black wig and black suit (costumes by Stevenson), Potenza’s Poe is, superficially, a comically delightful apparition. But aside from some provocative remarks on the omnipresence of death and a few brief musings on his tragic marriage, this Poe remains a puzzle McDonough leaves unsolved. White-clad Dickinson fares somewhat better: With the help of Stevenson’s wonderfully consistent portrayal, we see a woman whose deep need for safety leads her to hole up in her Amherst closet, where nothing can disturb her as she thrills to the English language.

As to why these two writers end up in one place, McDonough imagines that somehow Poe didn’t actually die in 1849, but was instead sentenced to a life on the run from an evil doppelganger. This pursuit has now led famous Poe to the unknown Dickinson’s home, and here he hopes to find refuge at least for a few minutes. There are a few other plot devices: Poe is fated to bring an empty coffin with him on his travels, and Dickinson, not too credibly, gets drunk on Poe’s cognac. Poe bristles at the idea that he’s a third-rate poet, and Dickinson persuades him to listen to a few stanzas of her gnomic verse. Dickinson admits that she fears life more than death; and Poe mistakenly assumes that she wants him to make love to her. And so on and so on: everything but a good reason why this playwright has put these characters on this stage at this moment. Why not Emerson and Hawthorne? Why not Richard Wright and James Baldwin?

But then there are those superb performances to console us for the inadequacies of the text. Potenza may not have a lot to work with in McDonough’s writing of his character, but he nonetheless gives us a Poe who’s miserable, vain, haunted and exhausted from running. This Poe delivers his lines with a persuasive Southern accent, and is quick to remind us that he’s also an important literary critic. Potenza is one of the Bay area’s best actors, and if the writing of this play were as skillful as he, this would be a terrific comedy. Stevenson, meanwhile, is a coy Emily Dickinson, shrewd and self-possessed, just a little censorious of the famously raffish Poe, and not a bit attracted to the big bad world outside her window. David M. Jenkins directs capably, managing to hold our attention even when next to nothing is credibly at stake for Dickinson or Poe, and Scott Cooper’s set, of an elegant bedroom with antique bed, fireplace and small writing table, is all that’s really necessary. The original music of Tom Kersey and Jeremy Douglass is a kind of third character in the play, setting the mood for some scenes and quietly undergirding others.

Is this at least a good Halloween play? Well, there’s some spookiness at the end that’s worthy of a theme park, and there’s the look of that coffin Poe is fated to travel with. But fundamentally, this is a drama with a top-notch core idea — the meeting of Poe and Dickinson — that it never lives up to. It’s fun for a while — to look at, if not to think about. Somewhere, a tell-tale heart is keeping mum.

Here's the trailer for Edgar & Emily.