The movie is a blast of AI God complex run amok that’s sure to delight horror fans and terrify parents around the globe. 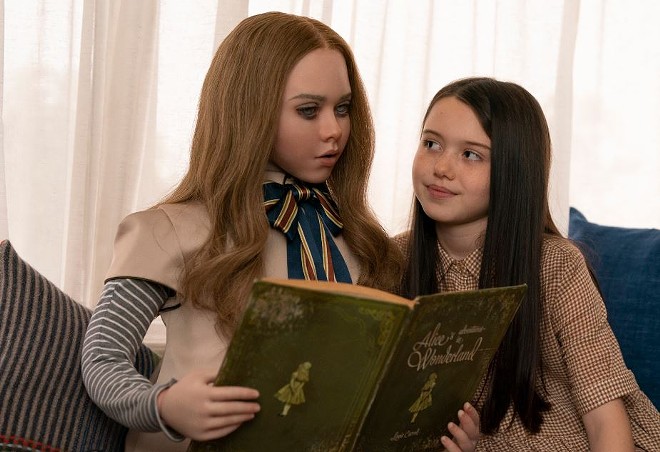 Photo via Geoffrey Short and Universal Pictures
Cady (Violet McGraw), right, forms an immediate bond with M3gan, a sentient android doll that exists to protect her from any threats, whether school bullies, a vicious dog or a pesky nosy neighbor. What could go wrong?
Coming off a holiday season spent with family, where I had the opportunity to watch my 11-year-old niece wax poetic on fashion, makeup and other topics of paramount prepubescent concern, I realize now that I’m equally afraid of being steamrolled by a pint-sized know-it-all as I am of being slaughtered by a sentient robot designed to look, act and talk like an almost-teenaged girl.

Welcome to “M3gan,” a blast of AI God complex run amok that’s sure to delight horror fans and terrify parents around the globe.

M3gan
4 out of 5 stars
Now Playing


That this PG-13 film is so good, so smartly written and so packed with moments of WTF nuh-uh-ness , despite not being very bloody and really not having all that many kills, is fantastic news because it means that 2022 wasn’t a fluke as far as horror now being the predominant movie genre.

The film’s not-so-secret weapon, however, is the one-two punch of physical actor Amie Donald and voice actor Jenna Davis, who combine to bring M3gan to unnerving and often hysterical life.

Truth be told, there hasn’t been a more perfect pairing of visual effects and voice acting since Brad Dourif first said, “Hi, I’m Chucky,” way back in 1988.

It’s no surprise that “M3gan” hits so many high notes given director Gerard Johnstone’s involvement behind the camera. If you’ve never seen his 2014 feature debut, “Housebound,” go seek it out immediately.

“M3gan” works so well because it takes its time to establish its core characters, from orphaned Cady (Violet McGraw) to her aunt Gemma (Allison Williams), who is thrust into guardianship following a family tragedy. Gemma is a brilliant engineer who builds next-gen toys for Funki, the company behind PurrPetual Pets (think Furby, only a more annoying forever version).

Gemma’s latest invention, an adaptive, evolving robot companion for children, priced to sell at $10,000, represents “the moment we kicked Hasbro in the dick,” according to her boss David (Ronny Chieng).

“M3gan” also works so well because it’s slyly subversive and reveals its true agenda with some solid strikes.

An opening advertisement for why children have to own a PurrPetual Pet nails today’s cutthroat marketing: The spot opens with a child lamenting, “I had a dog and she was my best friend and she got old and died and I was alone and sad,” before showing the child with their new interactive toy pet that will never age or die.

Later, one of Gemma’s design partners drops some truth bombs on her by pointing out that Gemma should be designing toys, not a replacement for a flesh-and-blood parent. And then a child psychiatrist evaluating Cady tells Gemma that M3gan might actually be a dangerous creation, not because it’s secretly a killer cyborg but because it is capable of forming such an attachment with its child owner that they may never be able to be without their doll, even once grown.

Obviously, the parallels between M3gan and say, I don’t know, the Internet, handheld electronic devices, cell phones, you name it, is pretty clear and spot-on.

If there’s a fault to be nitpicked, it’s simply that “M3gan,” for all its intelligent choices, wholly telegraphs several key plot developments well before those moments arrive. In fact, I knew how the movie would end within the first 15 minutes, as soon as Gemma introduced Cady to her at-home laboratory. That didn’t spoil the experience, but it would have been nice to not be right.

Regardless, something tells me that when (not if) “M3gan” dominates the box office its opening weekend, we’ll be getting a 2.0 upgrade of this killer doll in the near future.

John W. Allman has spent more than 25 years as a professional journalist and writer, but he’s loved movies his entire life. Good movies, awful movies, movies that are so gloriously bad you can’t help but champion them. Since 2009, he has cultivated a review column and now a website dedicated to the genre films...
Scroll to read more Events & Film articles