Puccini done proud at The Palladium. 
The success of any staging of Giacomo Puccini's Turandot depends on a few essentials:

A tenor who can sing the hell out of Nessun Dorma, the earworm-worthy aria assayed by everyone from Luciano Pavarotti to Aretha Franklin.

A Turandot who can credibly convey the passage from icy ruler to woman in love.

A soprano in the role of the selfless slave girl Liu who can sing and act with surpassing sweetness.

A staging that taps into recognizable signifiers of Chinese culture without slipping into cliché.

A musical director who can navigate the shifts between dark and light, grand and intimate, lightly comic and wildly romantic, that Puccini requires, and, specific to the Palladium, a stage director who knows how to fit an orchestra, a large chorus and principal singers on a stage that is not quite as commodious as, say, the Met's.

Happily, St. Petersburg Opera Company's production scores on all counts. The singing and the story-telling share an almost pristine clarity, and together pack a mighty musical and emotional wallop. 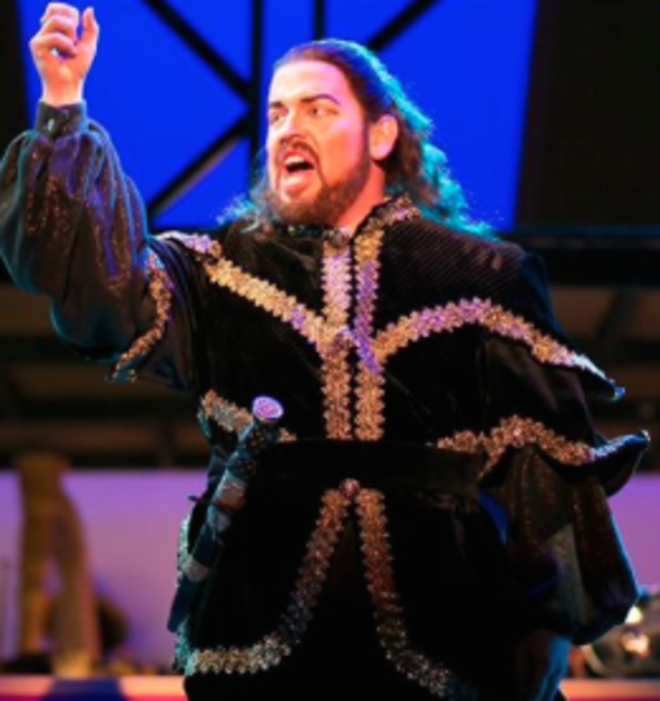 Set in Peking in "legendary times," Turandot was inspired by a Persian fable about an imperious queen so filled with rage at the fate of an ancestor, a princess brutalized by invaders, that she greets foreign suitors with an ultimatum: If you want to marry me, correctly answer three riddles — or else, off with your heads. Her regal charms, not to mention her royal coffers, tempt them anyway, and her executioner has already polished off a slew of hapless (and now headless) noblemen when she is faced with her most formidable challenge: a passionate prince with a knack for riddles and a singing voice so powerful it threatens to topple all of her defenses.

And maybe even put out the lights. I'm told the follow-spot problems in the first act were attributable to the vagaries of Florida weather, not to the decibel level of Casey Finnigan as Calàf. But the ardor of his vocal attack is such that you have no trouble believing he could not only melt the icy façade of Turandot (Susan Tsagkaris, all haughty froideur and spectacular headgear) but also win the adoration of Liu (Karen Chia-ling Ho, heartbreakingly lovely in voice and person).

It's to the credit of the production that you are kept in suspense about the ultimate fate of these three headstrong protagonists. And hey, give credit to Puccini, too, why doncha; though he died in 1924 before he could complete the third act, leaving doubt about his intentions for the ending, the arc of the story and the swelling emotionality of the music are completely enthralling. Stage director Marc Estafan does particularly well with the second-act centerpiece in which Calàf is presented with the three riddles; the formal procession, the ritualistic presentation of the scrolls, the carefully arranged stage pictures all heighten rather than overwhelm the life-and-death stakes, and we are acutely aware both of Calàf's increasing confidence and Turandot's rising fears.

An elegant simplicity characterizes the staging as a whole (sets by Warren K. Sodt, lighting by Keith Arsenault, costumes by Malabar Ltd.). The centrally placed pagoda is both regal and stylish, ancient China crossed with 1980s Milan (think the Memphis Group), and there are subtle allusions to more recent history, too — the Maoist red flags and the dun-colored rags of the populace, who are all too ready to ignore the despotic rule of their queen as long as she keeps entertaining them with beheadings.

In all, the chorus works well en masse, though the supplicants' non-stop supplicating was a bit distracting during early scenes. And musically, they were aces, rising to glorious heights in the rousing finale. As ever, Mark Sforzini works wonders, and this may stand as one of the best-sung, best-played St. Pete Opera productions ever — with particular credit to his three principals and the stalwart bass Matthew Curran in a moving performance as Calaf's father, all making their SPO debuts.

I have a few quibbles. Ping, Pang and Pong — part G&S-esque comic relief, part doomsaying Greek chorus, part royal henchmen — are played crisply and amusingly by Luis Gonzalez, Blake Friedman, and John Kaneklides (though stronger vocally when singing together than individually). There's an enchanting moment when, recalling the pleasures of an earlier time B.T. (Before Turandot), they unroll a bolt of blue cloth to represent a flowing river, then lounge languorously on the stage — where, unfortunately for anyone not sitting in the first few rows, they're pretty much impossible to see. During a key moment in the third act when Liu is singing a crucial declaration of loyalty to Calàf, she's kneeling downstage where — again — much of the audience can't see her. These choices — and having Turandot occasionally perch on the steps, where she has to awkwardly arrange herself and her considerable draperies — are off moments in an otherwise seamless effort.

Go — but try and sit up close.