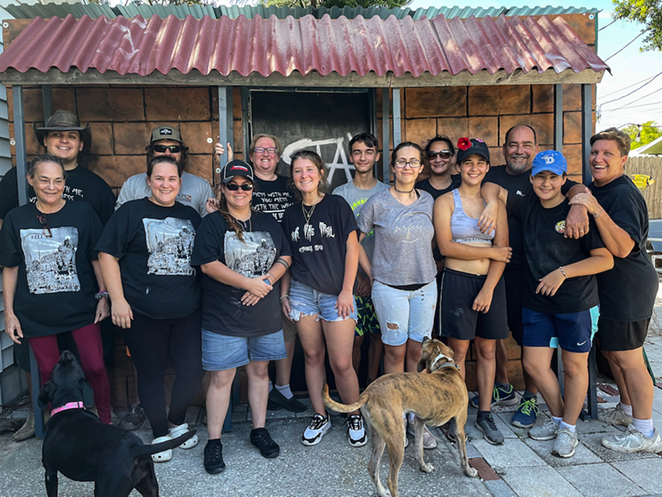 Central Florida is one of the best places in the world to celebrate Halloween. Where else can you trick or treat with Mickey Mouse, ride a roller coaster with demons, or wait in line with a bunch of teenagers for over an hour to get into a haunted house?

There are tons of places in central Florida where you can drop buku dollars this Halloween. You probably already know their names, which is why this article is different.

This article is about the little guys. I’m talking about the people who are quietly transforming foam sheets into front-yard Tombstones, the moms and dads dressing up just to scare the neighborhood kids, the teenage boys making monsters in their parents’ garage, the people decorating their yards to benefit local charities. This is who I want to celebrate this Halloween.

If, like me, you want to spend Halloween close to home with your neighbors, you needn’t look any further than Pinellas County, where Kathleen Barbiere and Mike Long are forming a network of neighborhood haunts.

Tarpon Springs: House on the Hill

Kathleen and Paul Barbiere’s House on the Hill is more than just a neighborhood yard display. It’s a haunted maze with a theme, homegrown props, and actual scareactors popping out at you.

The Tarpon Springs residents started transforming their yard into a haunted attraction around 25 years ago. At first it was a private affair. Then, about eight years ago, the Barbieres opened their haunted maze to the public as a fundraiser for Tarpon Springs High School Band, of which their daughter was a member. Initially, there was no set admission fee or suggested donation.

“A lot of people came through for nothing,” Kathleen told CL. “We just put a bucket out and we were taking donations. I think we made maybe $300.”

In 2018, the Barbieres began marketing House of the Hill on social media and reached out to press. That’s when I found out about this great Halloween display less than 10 miles from my house. Both CL and The Beacon/Suncoast News introduced Tampa Bay to House on the Hill that year. Attendance rose from 700 to 2,500 people. As a result, the trail raised $3,600 for Shriners Hospitals for Children in 2018.

In 2019, the annual haunt became a way for local kids to earn Bright Futures volunteer credits. Kathleen now gives the kid that volunteers the most hours each year a $500 college scholarship. “First of all, it gets them here,” says Kathleen. “Once they come and see how much fun it is, then I can’t keep them away.”

House on the Hill went on hiatus in 2020, citing pandemic concerns. But it’s thrilled to reopen in 2021 with a new theme and a mask requirement.

“We are so excited to be returning this year and unveiling our new haunt, Dead Man’s Swamp,” Kathleen Barbiere said in a press release. “We missed everyone last year and cannot wait to show off what we’ve worked on this year.”

This year’s theme came courtesy of Kathleen’s newest prop, Earl, a life-sized alligator made out of foam and Gorilla glue.

“I wanted to make something, and to be honest, I didn't think I could do it,” Kathleen told CL. “So real quietly I started working on it. It actually took me three months to make him, which for me is really ridiculous. But once he started coming across, I said to Paul, 'We should really do a swamp theme.’”

The gator sits in the couple’s back yard in between the severed halves of a dead man’s canoe. “Actually it was my niece’s canoe, and she had cut it up to throw it away,” Kathleen told CL.

The Barbieres used entirely handmade or recycled props in the maze this year. Kathleen even pulled up and dried some local grass-like weeds to lend their backyard a swamp-like appearance. It’s also worth noting that, thanks to a little pandemic remodeling, the trail is twice as long this year. c/o Haunt for HEP
At Haunt for Hep, Andrew Long programs each of his props to scare on demand using what his father calls a 'show controller.'

On the other side of Lake Tarpon, Palm Harbor resident Mike Long learned about House on the Hill in 2018 when he picked up a copy of the Beacon in his driveway. “My first thought was, ‘Why do they get in there and we don’t?’” Long told CL.

He and his son Andrew Long got serious about their Halloween decorations around 2015, when Andrew was only 13 years old. The Longs’ neighbors erected a little graveyard on their property that year, and Andrew couldn’t take his eyes off of it.

“I always tell people that Christmas is pretty, but Halloween is addictive,” Mike told CL.

What started as a small cemetery became a serious display after the father-son team visited Paul Duryea’s Mansion of the Macabre yard haunt (now retired) in Dunedin one fateful Halloween night in 2016.

“It was incredible; it really was,” Mike told CL. “Andrew saw that and he came home and started talking about it. I reached out to Paul just to get some ideas and talk about what he’s doing, and it really exploded from there.”

When Andrew saw Duryea’s haunted mansion with its professionally-built props, he saw what was possible in a home Halloween display. “That kick-started it right there,” said Mike. “Andrew started building things and he never stopped.”

As the son of an engineer and grandson of a contractor, Andrew learned to use power tools at a relatively young age. He designed and built theater sets his junior and senior years at East Lake High School. At home, he explored pneumatics (a branch of engineering that uses compressed air) to create unique Halloween displays that move as you walk through them. This year, Andrew made a pneumatic weeping angel that rises to over eight feet when triggered. It’s the most complex pneumatic prop he’s made yet.

“The weeping angel is kind of a play on the monument that you see in a lot of graveyards and cemeteries, where they have a big pedestal with an angel or woman leaning over it, head down and crying,” Mike told CL. “We took that and said, 'How do we make this really freaky?' Andrew built the pedestal and the angel [that] sits over it…When triggered, this angel rises up. The arms, the wings, the torso, everything moves because it's got five pneumatic cylinders in it. It rises to over eight feet, and it's got this terrible scream that it does, so it's really startling…"

Andrew programs each of his props to scare on demand using what his father calls a “show controller.”

“It's basically the brain that controls what this prop is going to do when it's triggered. Is it just out and in? Raise an arm? Do a bunch of really intricate movements? Andrew writes the code for that based on whatever the show is going to be. That show not only consists of movement, it consists of lights, sound, foggers. We can do pretty much anything we want. That allows us to step back and just let people go about their business…It’s truly a walk-through display that comes to life, because everything's on passive infrared sensors."

In 2018, Mike realized that Andrew’s haunted prop-making was becoming something more than just a hobby. That was when the Longs started using their yard display to raise money for the Homeless Empowerment Program (HEP) based in Clearwater. Doing the haunt for charity expanded the Longs’ community reach.

Now they’re able to give Bright Futures credits to volunteers, which has attracted a crop of East Lake High Theater students who perform as scareactors each year. They have about 15-20 scareactors participating this year. One of those scareactors is Mike’s 17-year-old daughter, who’s playing a zombie bride.

“The thought is, there’s a wedding, the bride went crazy and she’s murdered the groom,” Mike told CL. Naturally, Andrew built a 23-foot-high haunted church for the big event.

A network of haunts

The Longs and the Barbieres finally met after their haunts both made the news in 2018. This year, they partnered for the first time to expand their collective reach. And they’re looking to bring more people into the fold, starting with Mike Lowe’s Scarehouse Pinellas in Largo. The goal, Mike Long told CL, is to ensure that people know where to go for the best neighborhood haunts.

“It’s like Christmas,” Long told CL. “We all know, for the most part, [which] neighborhoods to hit that always have the lights.”

Why not have the same thing for Halloween?