The comedy legend died today at the age of 61. 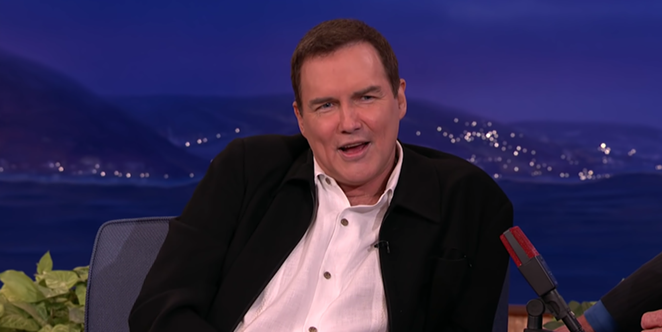 Legendary writer, comedian and actor Norm Macdonald died today at the age of 61, after quietly battling cancer for 9 years. He leaves behind a legacy of hilarious stand up sets, TV show episodes, movies and interviews. In 2014, he talked about doing stand-up in Florida on “The Howard Stern Show,” and being offered sex and drugs from people- against his will.

During the interview, Stern asked Norm what happened in Florida.

He went on to claim that a limo driver picked him up and told him, “I can take you any place man, anything you want.”

Norm said, “What?” To which the limo driver responded, “Anything you want, I got my wife.”

“Here I am thinking he’s talking about drugs or something,” Norm says, “But he starts with his wife!”

Norm wouldn’t engage in such a thing, because there might be too many surprises.

“You go, ‘What the fuck, who the fuck is this guy?,’” Norm said. “Nobody told me about a guy coming out of a closet wackin’ off with his half-cock, half-hard cock. Where the fuck did he come from?”

Since Norm’s death today, Hollywood has taken to social media to express condolences to a man who was an inspiration to so many.

“Let me pause my meaningless online arguments to say Norm was one of the greatest comedians to have ever lived,” comedian Tim Dillon Tweeted. “One of the best moments of my career was when he found something I did funny. Very few comics will ever possess that level of mastery. RIP.”

Norm started his stand-up career in small comedy clubs around Canada. He began his career as a writer for “The Dennis Miller  Show” and then “Roseanne,” before moving on to work at “Saturday Night Live.” He became widely popular in his role as the Weekend Update anchor. After SNL, Norm went on to act in several successful movies, ran a TV show and podcast, and never stopped pursuing his lifelong love of stand up comedy.

Because of him, I’ll never be able to look at a moth the same again.

Go to the light, Norm.