'Good Intentions' opens at Morean Arts Center on Sept. 10 and runs through Oct. 25. 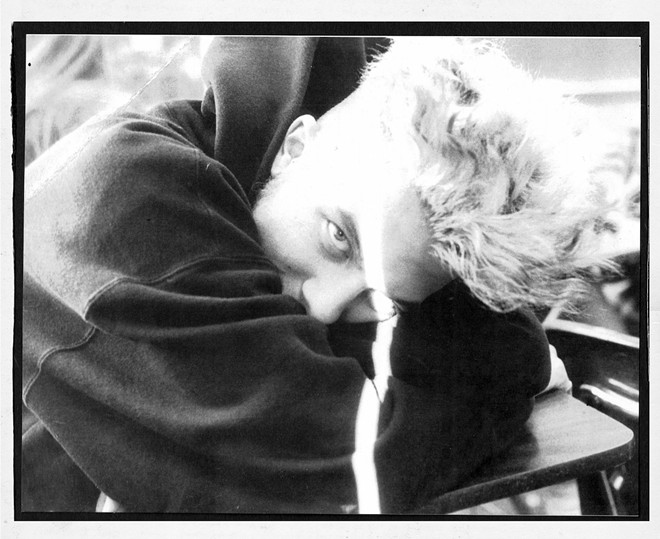 Photo by Joey Clay c/o Leon Bedore
Leon Bedore, aka Tes One, c. 1993.
It’s been 30 years since Leon Bedore started tagging his moniker, Tes One, in public. He was 14 years old then and ran with a small crew called Side By Side. He won’t say exactly where he aimed spray paint cans, but strip malls, bridges, plus the inside and outside walls of abandoned buildings would often play canvas.

The goal was simple: to create art that lived in the streets.

“I truly thought that when the business owner came out the next day and saw this colorful mural on the back of their building, they were actually going to be so happy that they wouldn’t want to paint over it,” Bedore, who turns 45 on Sept. 20, told Creative Loafing Tampa Bay.

The naive thoughts of an idealistic teenager, for sure. The audaciousness even led to a 1994 arrest.

“We were walking back home after painting all night, cutting through neighborhoods and streets with backpacks full of rattling cans. It was the easiest pickup ever; there’s like five of us with backpacks and covered in paint,” Bedore explained. “They questioned us one at a time and everyone had a different story.” 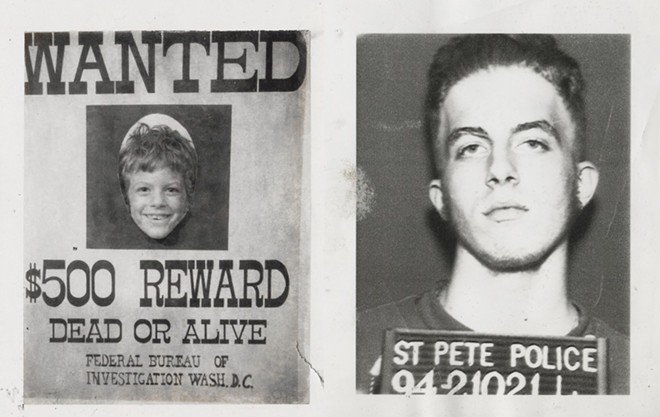 Photos c/o Leon Bedore
(L-R) A seven-year-old Leon Bedore and Bedore's 1994 mugshot, the first and only time Tes One's been arrested.
It’s the first and only time he’s been arrested. Within a year or so, someone tapped Bedore, who was still in the Gibbs High School art program, to do his first paid mural. The Tes One story has been unraveling ever since as he’s evolved as a painter, graphic designer and sculptor.

While some work has vanished (most notably, the 2012 “State Lines” Palehorse collaboration on the back of the former State Theatre), a trip around Tampa Bay proves that Tes One’s touch is a staple, and defining aesthetic, of the community. It’s in public parks, on rollaway doors, in alleyways, and part of numerous social justice projects. There’s a joint with Bask on downtown Tampa’s Poe Garage, built around his “Reflective Practice” image. A few blocks away, a human trafficking awareness piece is unignorable. From there, a short trip north on I-275 brings you to an inspirational “Begin Anywhere” message. In Pinellas, Tes One is even more ubiquitous, appearing on housing in St. Pete and Dunedin and at businesses everywhere. And yes, on a few covers of CL, too.

But it doesn’t stop in the Bay area.

Bedore painted at Art Basel. His work is on the walls of the Brooklyn Nets main office and at Facebook’s Alabama outpost. Countless brands including MTV, Absolut, Toyota, Nike and The New Yorker have all asked for commissions. In 2014, he even teamed up with FIFA for its first-ever globally-distributed food packaging in conjunction with the World Cup. Most recently, The Library of Congress asked to keep Tes One’s first-responder-inspired “Masked Crusader” to help catalog our once-in-a-century pandemic.

What still carries on to this day is the responsibility Bedore feels when it comes to creating art in public spaces. And this weekend, he begins a long look back when Morean Arts Center lets him take over the entire gallery for a career retrospective (Japanese artist Jun Kaneko is the only other person who’s been given as much space at the downtown St. Pete art museum).

Simply put, the show—"Good Intentions," which opens on Sept. 10 and runs through Oct. 25—is a chance for Bedore to revisit how this all started.

The exhibition will include sounds from Ol' Dirty Sundays co-founder DJ Fader, who Bedore met in the early-'90s when they were both heavily involved in hip-hop (Bedore was was promoting his friend, an emcee named Surreal). Fader even has Tes One art tattooed on his arm. To mark their coming back together, the duo curated a mixtape, and have 100 cassettes to give out at the show—a total throwback moment.

“Even the name ‘Tes One’ and how I still use it, it’s a reminder of a time where I didn’t know better,” he said. “I might have been doing it wrong, but I did have good intentions with what I was trying to create.”

There are more than 100 works in the show, and Bedore—who co-founded Shine mural festival eight years ago—has arranged the early stencils, paintings, design, sculpture and mural work with his new group (Up&Over, a team-up with the Vitale Brothers) in a way that makes it easy for viewers to track the arc of his development.

He’s no longer a graffiti artist, but there are pieces that allude to that time when he didn’t know the rules and boundaries—a feeling of endless possibilities. Works from the early-2000s show when Tes One’s signature style, or at least what he’s known for, started to emerge. There’s even newer stuff—geometric and color-based work that is more abstract—which Bedore has trouble explaining. 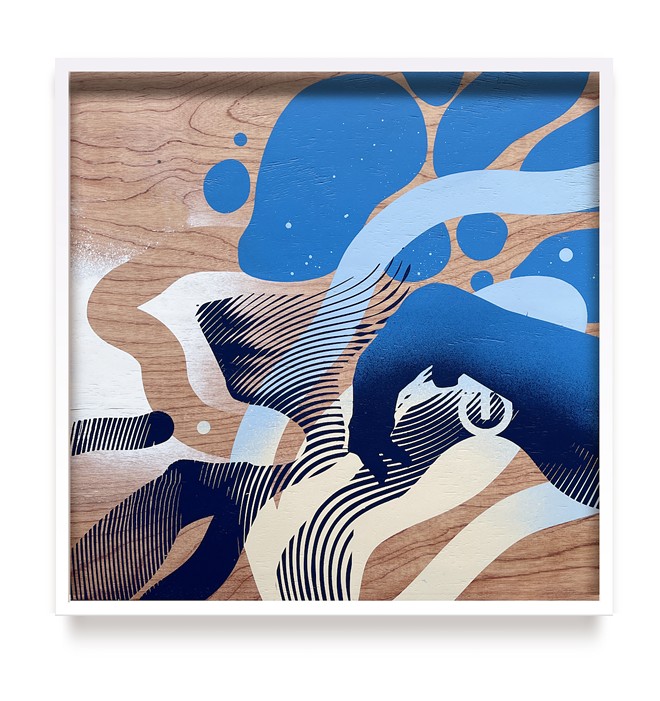 c/o Leon Bedore
'Flow State' by Tes One
“It’s so new for me that I’m not even sure where it sits, but it’s something that I’m really vibing with, definitely kind of uncharted material for me,” he said. He won’t be the only Bedore wading into new waters either.

The show is also the first public exhibition for his nine-year-old daughter Cyan. “She will have a group of paintings there that I got to collaborate with her on. I’m excited to share those with people, too,” he explained.

And while he plays proud papa, Bedore will also think about his own dad during the opening.

After watching his parents divorce when he was six or seven years old, Bedore didn’t reconnect with his father until his 20s. “He always knew I was an artist, but could not comprehend how dedicated and seriously I took it,” he said.

But Bedore never faulted dad for being confused, and as the scale of his work expanded, dad’s vision of his son’s identity came into focus. The career concerns turned into genuine pride and appreciation for his son’s voice.

“His praise was sincere. It may have taken us a while, but we did finally recognize one another, and for that I am forever grateful,” Bedore said. 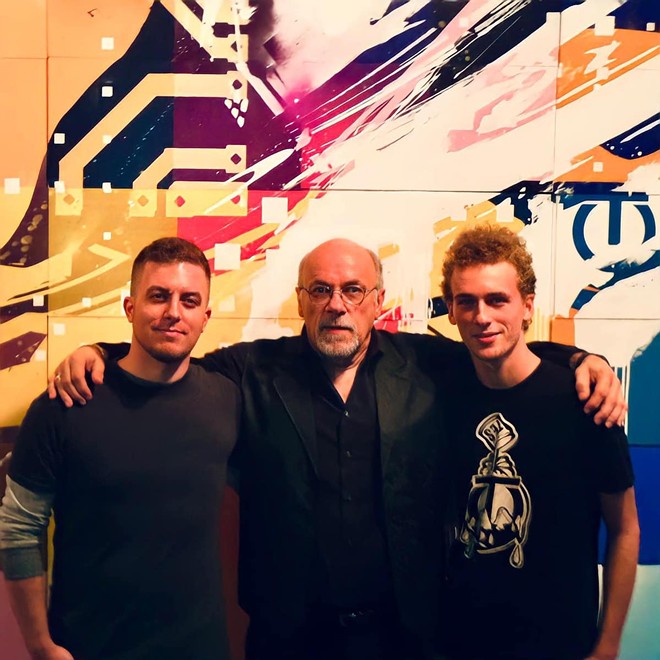 Photo via Leon Bedore (Tes One)/Facebook
(L-R) Leon, Gregory and Daniel Bedore.
Because of a health condition, dad asked his son to give him a private tour of the show before it opened. The one-on-one never happened.

Gregory Bedore died last month at the age of 70, just 18 days before doors on the new show opened. Last Sunday, Gregory was laid to rest. Dad’s hope to see the show was the last thing he and Bedore talked about. That wish, and a big assist from Morean staff, is the only reason Bedore pressed on.

“I am dedicating this show to my dad,” he said.

It goes without saying that dad would be proud. While it took years to understand why Bedore threw paint on walls, Gregory got to spend the last days of his life watching his son bloom. Thirty years after the first tag, the streets of Tampa Bay are alive with the work of Tes One. Good intentions run amok, indeed.
click to enlarge 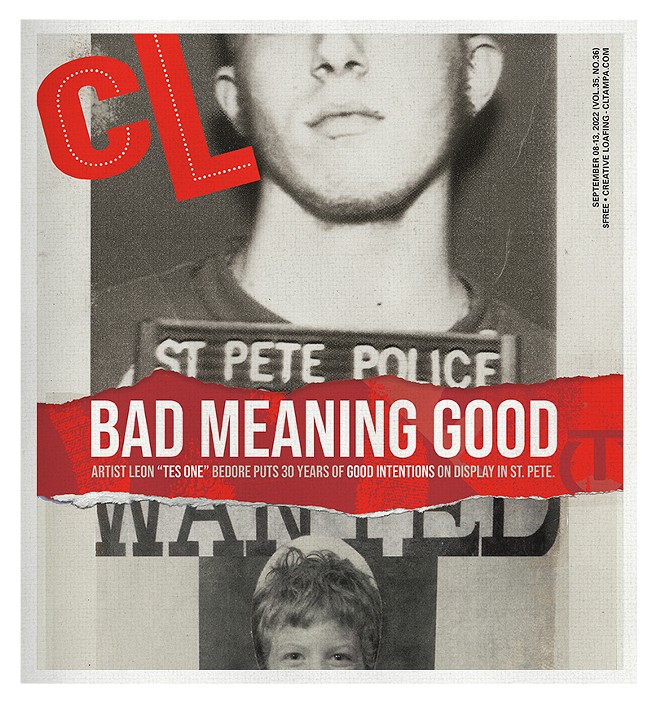