Theater Review: Dance away with “An American in Paris” at the Straz

Among the many spectacular moves made by Garen Scribner, playing the title role in An American in Paris at the Straz, there’s one that just about sums up the show: In mid-air, all angles and forward motion, elbows and knees bent, he looks as if he’s about to race into the wings without touching the ground.

Particularly in its first act, a sense of joyous momentum drives this stage adaptation of the 1951 movie musical, set to the music of George and Ira Gershwin, about Jerry (Scribner), a vet-turned-artist in post-WWII Paris, and his pursuit of the lovely Lise (Sara Esty). Moreso than in the film, the Tony-winning production by director/choreographer Christopher Wheeldon and playwright Craig Lucas captures the energy of a society shaking off the horrors of war and forging ahead to a new era. At one point, a character says she wishes everything would stop changing, but by that point everything has changed, and everyone’s involved — not just the principals, each transformed by love or art or friendship, but the entire ensemble.

This isn’t called a dance musical just because it features (on Broadway and on tour) ballet stars in the leading roles. It’s because even the scenery dances: Members of the chorus swirl set panels into place, slices of Paris fly in from above, animations make an artist’s sketches come to life. Wheeldon and his amazing designers (set and costumes by Bob Crowley, lighting by Natasha Katz, projections by 59 Productions) produce transformation after transformation with breathtaking quickness; one moment you’re in a park by the Seine, next in a rehearsal hall, next at a masquerade ball. I wondered how the extended dance fantasy sequences in the film — all blazing Technicolor and frankly artificial sets — would translate on stage, but not to worry. When one character dreams of playing Radio City Music Hall, sure enough there it is in a flash, in a production number straight out of Busby Berkeley. 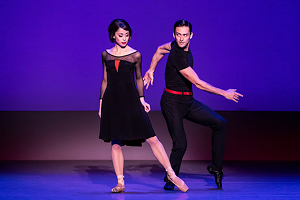 None of this spectacle would matter much if we didn’t care about the people it surrounds. But we do, because they’re a pretty irresistible bunch. Scribner (a former soloist with the San Francisco Ballet) radiates All-American-Boy-ish optimism, his leaps and bounds seeming to emerge spontaneously from his ardor for Paris, art, and a particular Parisienne. As Lise, Miami City Ballet vet Esty is exquisite; not only a dancer of delicacy and strength, she’s also a subtle actress, finding all the shades of Lise’s sadness and reluctance and dawning love. And they both can sing — which, if your task involves singing Gershwin standards like “The Man I Love,” is a good thing.

As Henri, a textile heir who loves Lise, too, but may love the idea of being a musical comedy star more, Nick Spangler finds the comic primness and hidden panache in his character, and sings with a sparkling tenor. Emily Ferranti is as bright and bracing as a dry martini in the role of Milo Davenport, the wealthy American woman who takes Jerry under her wing. Etai Benson, as Jerry’s composer buddy Adam Hochberg, who writes a ballet for Lise and also falls under her spell, brings wit and real poignancy to a character portrayed in the film by the professional sourpuss Oscar Levant, who was essentially playing himself. (There’s a little in-joke allusion to that fact in the script.) Craig Lucas’s book fleshes out Adam’s character considerably (he’s also the show’s narrator); his Jewishness becomes a plot point, as does that of another key character, part of a candid acknowledgment (not made in the movie) of the Nazi shadow still hanging over Paris after the war.

To some degree, the anguish that arises out of this plotline, and the drawn-out resolution of the love triangle — or is it a quadrangle? — slows the show down somewhat in the second act. Jerry’s willingness to settle, however briefly, into a kept-man scenario with Milo seemed a little more credible in the film (its star, Gene Kelly, was better able than Scribner at suggesting a hint of sleaze beneath the gleaming smile). But the decision that Adam makes about his ballet (called, natch, “An American in Paris”) — that, rather than perpetuate the dark sorrow of the war years, he’s going to create something that brings joy — carries a particular weight for audiences in 2016. (As I heard one man say during intermission, “We deserve this.”)

Matthew Murphy
Garen Scribner and the company of 'An American in Paris.'

And the dancing — well, it’s infectious, as in “Fidgety Feet,” in which Jerry’s inability to sit still while watching a ponderous “modern” ballet infects the feet of everyone around him (even Henri’s disapproving mère, played with great hauteur by Gayton Scott). Like the wonderfully inventive take on “I Got Rhythm” in the first act, in which a bicycle-powered generator gets everyone moving during a blackout in a cafe, and like the gloriously romantic pas de deux of Jerry and Lise, the steps arise out of the situation. You think, of course they’re dancing. I’d be dancing, too!

You might just leave the Straz with a case of fidgety feet.

An American in Paris