Yes, you can now play pingpong for free in downtown Tampa 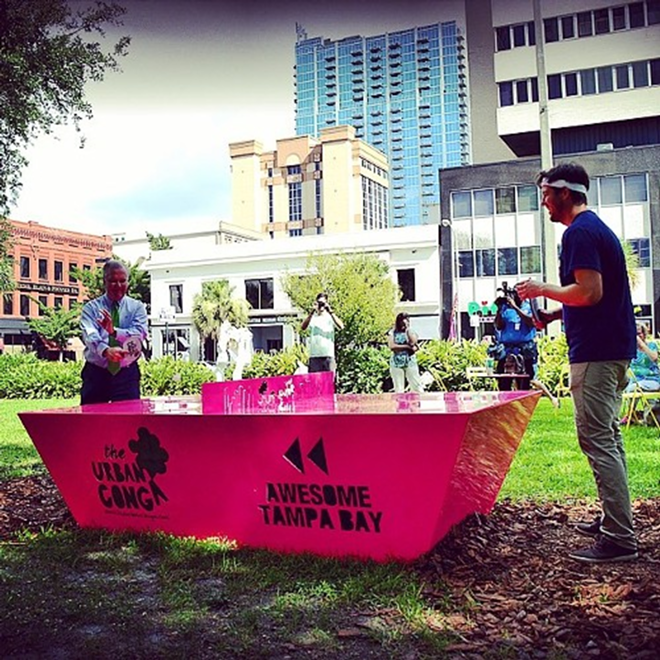 instagram.com/theurbanconga
Yes, you can now play pingpong for free in downtown Tampa
click to enlarge Passersby may have noticed a new, big ol' bright pink table in Tampa's Lykes Gaslight Square. Well, it's calling your name. The permanent piece is actually a ping pong table, and it's adding another wrinkle to a downtown Tampa community that seems to grow increasingly more active with each passing week (via 83 Degrees).

"Ping Pong In The Park" is the brainchild of Ryan Swanson, founder of non-profit creative collective Urban Conga which promotes community activity and physical social interaction through "play," while also hoping to "spark a conversation between the public realm and the human body through interactive installations." Made possible by a $1,000 microgrant from Awesome Tampa Bay, the ping pong table is an opportunity for downtown residents and visitors alike to interact with each other while taking a break from lives that seem to revolve around computer screens.

"Even if you don't know how to play Ping Pong, it's an easy game to pick up on," Swanson, 26, said in an interview explaining his hopes for the project. "It's also a game that people love to watch and just engage with." He also wants to be build more tables if Urban Congo can get the funding.

Swanson — who has a masters degree in architecture — quit his job at an architecture firm nine months ago to establish the non-profit, and while he no longer has the security of a nine-to-five, the tradeoffs work in his favor.

"Since I quit my job I've learned a lot about the business side of starting a company and a non-profit," he told CL, "I lost that stability but gained the enjoyment of doing something I love and am very passionate about."

There is no cost to play, and if Interested parties don't have their own paddles and ball, then a press release says they can pop into Urban Juice (510 N. Franklin. St., downtown Tampa), leave a $10 deposit, and head to the table. Holy Hog BBQ will handle the equipment when their downtown Tampa location. Check out a video about the project below, and see more pictures of the table in action at Urban Conga's Facebook page.