Doc B's Fresh Kitchen will showcase its something-for-everyone selection to Tampa in November. 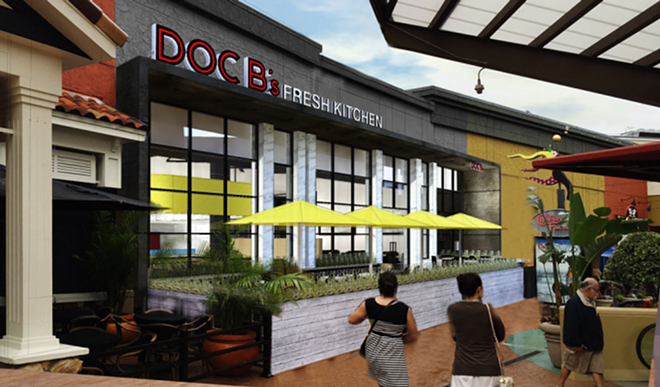 Doc B's Fresh Kitchen
A rendering of the new Doc B's at International Plaza in Tampa.


In November, the region will see the opening of another Chicago-based restaurant concept, Doc B's Fresh Kitchen. The casual dining experience is set to introduce its first out-of-state expansion to Tampa's International Plaza.

With a 4,200-square-foot interior and an outdoor patio at 700 square feet, the Tampa Doc B's, which is now in the construction phase, will operate as the brand's largest location. The restaurant will be accessible from Bay Street.

Outside, patrons will find banquette-style seating, high-top tables, umbrellas, more tables and a fire pit. Meanwhile, white carrara marble tile, flown in from Italy, will mingle with dark wood and an ocean blue floor inside. While booths take up most of the 145-seat dining room (a few near the open kitchen will be anchored by Sub-Zero wine coolers), a communal table, 15-seat bar and additional banquettes will also be featured.

"I'm excited," founder Craig Bernstein tells CL during a sneak peek at the restaurant on Monday morning. "I'm excited to bring what I think is a new style of dining [to the market]."

Craig, who named the concept after his late father Dr. Bernstein, opened the first Doc B's in 2013, debuting the second nine months later. The offerings vary a bit at each eatery, but they reflect the doc's balanced approach to eating. "Everything in moderation," he used to say. There's "a yin-and-yang-style effect" to the menu, as Craig puts it.

A mix of local and national ingredients are sourced to ensure the food's quality. Fresh tuna is brought in from Hawaii, San Francisco provides the Shanghai lo mein noodles, and free-range, antibiotic-free and vegetarian-fed chicken comes from a small farm in Arkansas. Craig says locally grown produce will be used for items like desserts and sides.

Though the signature Doc's B lineup is extensive, it offers something for everyone: starters such as baked polenta fries; eight salads; inventive sandwiches and burgers (giardiniera slaw, Monterey Jack, crispy leeks and habanero-honey barbecue on a bun, anyone?); and the build-your-own "Wok Out Bowl" that combines proteins, sauce and bases like brown rice. The seasonally focused Tampa menu will change quarterly.

A juice-driven cocktail program, variety of wines and seasonal-meets-local beer selection will be highlighted alongside Chicago's Bow Truss coffee, too.

As an aspiring entrepreneur, Craig met with Howard Schultz, chairman and CEO of Starbucks, at a young age and also learned from Morton's Steakhouse owner Allen Bernstein, his mentor. Hillstone Restaurant Group, the Bakersfield restaurant and Standard Market Grill are among the Chicago resident's other involvements.

Florida's second Doc B's location is set to launch in Fort Lauderdale next summer, and Craig plans to divide his time between both states.

Editor's note: This story has been updated since its original publication.