It started with a rooster: Portuguese fusion is the star of an opera singer's St. Pete "roosteraunt"

Russell Andrade decided to open his Central Avenue eatery because he was hungry. Russell Andrade decided to open a restaurant because he was hungry. No, really.

The Portuguese-American professional opera singer is the owner of downtown St. Pete's latest dining destination, which he says is the only place in Florida to score food from the former colonies of Portugal. His part restaurant, part speakeasy is taking shape inside the historic Kress Building at 475 Central Ave., where Moscato's Bella Cucina shuttered over the summer.

“As far as I can see, there isn’t anything like [colonial Portuguese cuisine], at least in Florida," Andrade tells CL. "If you want Mozambique food, good luck to you. If you want Macanese food, you have to go to Chicago. That's the closest place I could find authentic.

The story behind the new “roosteraunt” begins, "It all started with a rather lucky rooster," and chronicles a boy and his pet rooster coming to the aid of Mouraria — a multicultural haven in Lisbon, Portugal — after an infamous earthquake hit Portugal's capital city. (The rooster is the national bird of Portugal, by the way.) But is the tale true?

"No," Andrade says with a chuckle. "We're having fun."

Last year while living in Athens, Georgia (where he was absolutely miserable), he realized St. Pete was home. He returned to his old stomping grounds soon after and has been trying to figure out what to do with the rest of his life ever since. The restaurant business seemed like a good fit.

Meaghan Habuda
Executive Chef Ed Lowery in front of one of the Vitale Brothers murals inside the restaurant.

At Iberian Rooster, fun shapes everything from the cuisine and craft cocktails to live entertainment and the idea of tiptoeing downstairs, where guests will find a modern speakeasy. Andrade tapped Ed Lowery as his executive chef; Lowery (who, like Andrade, is also a musician) most recently served as executive chef and kitchen manager for Tampa hangout Skipper's Smokehouse.

"I'm really excited about all of it," the chef says, “because it's kind of a weird fusion of different things and tastes and flavors. Just to be able to play with the brightness of what we're doing is kind of a fun challenge. I think that people are really gonna like it.”

While developing the menu, Lowery did a little bit of everything. He looked up classic dishes to put his own spin on (keeping the American palate in mind), but also imagined much of the lineup on his own — playing with flavors and spices to see what paired well together.

Look for Goan beef patties, which are essentially puff pastry stuffed with beef, and a Brazilian hot dog known as the Hotch Dog. Topped with a range of accompaniments (even an egg), the wiener is a full meal in itself.

"I sang in an opera in São Paulo, and every night after we'd finish singing, all of us were completely wrecked because it's a three-hour opera and you're up there doing your thing for three hours," Andrade says. "You get out, and there's always a street vendor giving hotch dogs. And it's like, 'Sweet.' They'd have mashed potatoes in there. And corn. Sometimes you'd have rice and beans."

Apart from the booze, what's served up at the 150-seat Iberian Rooster will be 100 percent nut-free. The restaurant requires its vendors (a majority of which are locally based) to sign paperwork that promises their products won't come in contact with nuts. Andrade's son is deathly allergic, so it's important that the restaurant can accommodate him and others with similar food allergies. (And don't worry: vegan and gluten-free options are planned as well.) 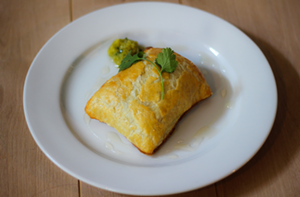 "Everything that's on the menu, everything that [Andrade's] wanting, is just insane and crazy and I love it," says Rose, who made roti canai (the Malaysian flatbread) for the first time last week. "It's pretty exciting, exciting new stuff so I don't get bored."

Located on the 400 Block of Central next to Nouvelle Beauty Bar, the building is divided into a 5,800-square-foot ground floor and 5,800-square-foot basement. Both levels have bars with craft cocktail menus — retro and dessert drinks among them, as well as cold-brew cocktails spotlighting Black Crow Coffee Co. Each drink tells its own story, and Iberian Rooster aims to be the place for specialty cocktails.

Upstairs, where guests will spot custom murals by the Vitale Brothers, is the spacious main dining room made up of two- and four-top tables, benches and a specially built 10-person booth. Richard Hughes of ClearpH Design, who designed the nearby Station House, is also handling the branding and design work for Iberian Rooster.

The entertainment-driven speakeasy on the lower level, featuring small plates and a lounge, will mix old with new. A projector is on hand for movie nights, and the music lineup will include classic jazz, Opera on Tap (meant to reach folks who wouldn't typically hear opera in an unexpected venue) and, eventually, dueling pianos.

Though Andrade says they're not sure if downstairs will be open 24/7, they'd ultimately like to offer entertainment nightly. He also likes the idea of having to sneak down there, Prohibition-style, to have a good time. There's a side-door entrance, so why not?

Staff training starts this week, followed by a friends and family night Nov. 14. On Nov. 15 and 16, Iberian Rooster will host a tribute to the city's service workers, offering 60 percent off food to police, fire, sanitation, post office, hospital and school employees. Opening weekend will kick off Nov. 18, but locals can get free tastes of roosteraunt dishes at downtown St. Pete's [email protected] tonight between 10 p.m. and midnight.

"You go to a lot of places and they try to get tourists, and that's who their main source of income is," Andrade says. "We want to support our community because they'll be here for us."