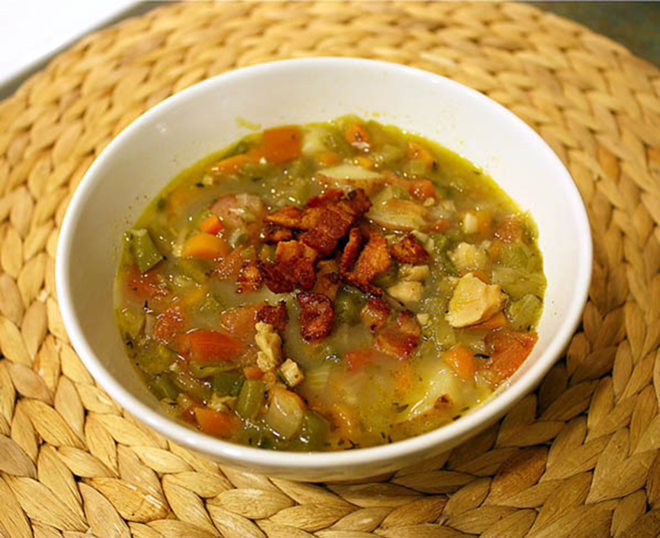 Though one united nation, the U.S is host to a mix of cultures, making each region feel like a different country. Each of these unique regions boast contrasting cuisines, cooking styles and ingredients that are products of both the indigenous food of the region and from the immigrants who have settled there.

Though most consider Florida to be part of "The South," the state actually lays claim to its own sub-section of regional American fare known as "Floribbean." (No, I didn't make that word up.) The Sunshine State is a melting pot combining many cultures — from Latin America, the Caribbean Islands, Cuba, Puerto Rico, etc. — that have all infused their flavors and cooking techniques with the fruits of the land and sea to create a very distinct style of cooking.

Key West is a poster child for all things Floribbean (not including the chain stores and restaurants found on Duval Street), and the island's legendary conch chowder is a great example of the mish-mash of Caribbean, Cuban and Latin American influences that can be found there. It utilizes the meat from conchs — the large, pink gastropod shells that are often sold to tourists so they can "hear the sea" when they put an ear up to it — clam juice, a mix of herbs used in Caribbean and Latin cuisine, and vegetables (among other things) to create a simple, satisfying soup that is quintessentially Florida in a bowl.

Though conch is sold in every form on Key West, it's illegal to harvest conch in the U.S. and Bahamian waters due to over-harvesting (read: not a sustainable source of seafood). It can be found in frozen form shipped in from other Caribbean islands, but is not an easy find at your local supermarket. Thus, I've taken a base recipe for conch chowder and adapted it using clams — due to their similar texture to conch meat — and crab, both of which are common ingredients in Floridian fare.

Unlike the creamy-heavy New England variety, this chowder has a clear clam broth base and is similar to Manhattan clam chowder, the main differences being the additions of hot pepper and lime juice. It's also perfect for any time of the year — not too heavy for an outdoor dinner in the humid summer months, yet comforting on a cold and blustery day (you know, those two weeks in late January).

Serve this Floribbean chowder with a bottle of your favorite hot sauce (I recommend Cholula or Tabasco) and some oyster crackers.

A few dashes of hot sauce, to taste

Salt and pepper, to taste

1. In a medium pot over medium heat, cook bacon until crisp. Remove bacon, drain on paper towels and set aside.

2. Add the onion through allspice to the pot and saute over medium heat until the vegetables just start to soften. Add the potatoes and tomatoes, stir, then pour in the clam juice and add the bay leaf. (If the liquid doesn't cover all of the ingredients, add either more clam juice, fish or vegetable stock or water to cover everything.)

3. Bring to a boil, then reduce to a simmer and add the thyme. Simmer until the potatoes are tender, then add the clams and crab and simmer for another 10 minutes. Remove the bay leaf.