We also have a full spread of Easter specials from Tampa Bay restaurants, for anyone making last minute weekend plans. 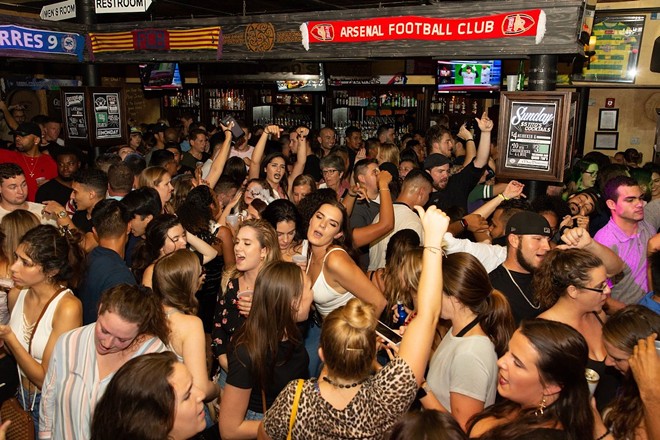 Photo via MacDintonsStPete/Facebook
MacDinton's in St. Petersburg, Florida in fall 2019.
You can celebrate your Easter dinner at the newly-opened Nine Spices hotpot and Korean BBQ location Clearwater, or perhaps spend your holiday weekend searching for PBR's pastel-colored keggs instead.

If you're a "Bar Rescue" fan, maybe it's time to do some "recon" at the former Cerealholic in Ybor City, which recently rebranded after being featured on the popular bar-flipping show.

Between new restaurants, closing vegan delis and the return of the Tampa Bay Seafood and Music festival, this week's foodie roundup takes us to all corners of Tampa Bay.

Nine Spices According to its Facebook page, Nine Spices' new Clearwater location celebrated its grand opening on Wednesday, April 6. Guests have the opportunity to utilize the hotpot-style soup burners, Korean BBQ grills in the center of the table, or both at the same time (although that requires a good deal of multitasking.) There are a wide variety of raw meats, vegetables, seafoods, dumplings and noodles you can cook either in your hot pot broth or on the shared tabletop grill. And, yes, there's a conveyor belt that delivers the ingredients right to you. 2543 Countryside Blvd., Clearwater. ninespiceshotpotfl.com

Brandon’s Vegan Deli  After repeatedly posting hiring ads over the last few weeks, Brandon’s Vegan Deli—owned and operated by the same folks who run its other locations in Ybor City, Sarasota and Dunedin—has unexpectedly closed and put the building up for sale. The deli’s manager also confirmed on social media that its Brandon location closed because the business couldn’t find enough staff. In addition to popular sandwiches, pizzas, salads and wraps on its menu, the remaining locations in Sarasota, Dunedin and Ybor City sell select grocery items like vegan cheese, candy, frozen meals and homemade deli-style “meats” by the half-pound. 859 Lithia Pinecrest Rd., Tampa. dunedin-vegan-deli.business.site

MacDinton's St. Pete When the Facebook page for St. Petersburg’s MacDinton’s posted about its final party a few weeks ago, most of its loyal patrons thought (or at least hoped) that it was an April Fool's Joke. Without stating why, the popular Irish pub at 242 1st Ave. N officially closed on Saturday, April 2 after one last celebration.Last year, Creative Loafing Tampa Bay reported on MacDinton’s former neighbor, Ringside Bar and Cafe, unexpectedly closing after its lease was not renewed. At the time, longtime Ringside manager Mitch Gray told CL that the same folks who were turning his former bar and venue into a 70s disco-themed nightclub, also had plans to transform MacDinton’s into a Western bar.

Pabst Blue Ribbon's Tampa Easter 'kegg' Hunt Nothing screams Easter like drinking 15 gallons of Pabst Blue Ribbon, and the beer company is giving Tampa a chance to do just that with its new Easter "kegg" hunt. On Saturday, April 16, PBR will hide several pastel painted kegs around Tampa and post clues on the brand's social media channels. Folks—21 & up, obviously—who find them get to keep the "kegg" for their own parties and will also get a gift card to buy a fresh keg of PBR in celebration. Tampa joins Milwaukee, Portland and Philadelphia as one of four cities included in the PBR keg hunt. —Ray Roa

Tampa Bay Seafood & Music Festival Running Friday-Sunday, April 22-24, tickets for Friday and Saturday cost $10 each while admission for Sunday runs for $15. Single-day tickets will get you inside of the event and access to live music from bands like Stormbringer and The Outlaws, but unfortunately won't cover the cost of any of the fest’s good eats. In addition to seafood stands that will be dishing out everything from fresh crab legs to peel-and-eat shrimp and lobster rolls, there will be a variety of local vendors peddling their art, crafts, wares and other homemade goods. All ticketing information can be found at eventliveus.com—but guests can also purchase their tickets at the festival's entrance. Curtis Hixon Park, 600 N Ashley Dr., Tampa. paragonfestivals.com

Restaurant Easter Specials Your whole family’s going to need to eat on Easter Sunday, and to keep them out of your house, here are nearly 40 Tampa Bay restaurants offering specials for the holiday. From mouthwatering brunch specials to exclusive holiday desserts, there are a wide variety of restaurants throughout Tampa Bay that are set to make this holiday weekend special. — Alexandria Jones

“Bar Rescue” changes Ybor City’s Cerealholic to 'The Loft Elevated Bar + Food' Jon Taffer, the "Bar Rescue" host who loves to fix bars by screaming "shut it down" and adding "not one, but two two-touch POS systems, " apparently did just that to one Ybor City restaurant, which is set to become the latest Florida establishment featured on the show. The Loft Elevated Bar + Food re-opened early this month after first opening as the nostalgic, milk slurpin' Cerealholic Cafe and Bar in December 2020. Gone now are Cerealholic's cereal bar, signature burgers with Apple Jack-infused meat, replaced instead with a Loft weekend brunch menu that aims to "elevate" your breakfast with items like pancake platter, steak and eggs, biscuits and gravy—all served Saturday-Sunday from 10 a.m.-2 p.m. The upcoming air date for this episode is still unknown. 1909 N 15th St., Ybor City. — RR