Don't rush it: NJoy Spirits is still off the beaten path, but now open to the public

A tasting room has been a long time coming for the farm-to-table Weeki Wachee distillery.

Combine ingredients in a 1-gallon pitcher. Top with a splash of grenadine, orange wedge and cherry. Njoy! 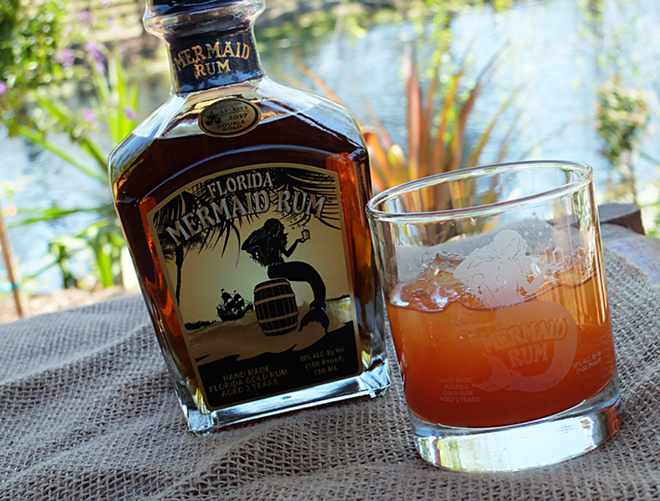 Getting to NJoy Spirits is how getting to any true farm-to-table Florida distillery should be. Windows down. Backroads. Maybe a couple of wrong turns here or there (hey, it’s part of the adventure). Native flora — and the hope of seeing some fauna — everywhere.

This trip, one CL A&E Editor Cathy Salustri and I made in early March, is not to be rushed. But first things first: Booze-curious visitors looking to take advantage of NJoy’s new open-to-the-public status should use the damn map, which the Weeki Wachee distiller keeps posted on its website. Courtesy of NJoy Spirits
Visiting the distillery? This map is your friend.

Your GPS will only take you so far, as in straight to the gated community of GlenLakes (ask us how we know), whose residents don’t really want you off-roading on their turf just so you can reach your spirited destination in the woods. Instead, be on the lookout for the Hernando Sportsman’s Club that, like NJoy, is part of the Chassahowitzka Wildlife Management Area.

Then you’ll know you’re in the right place.

From the entrance of the 35,000-acre state-managed park, it’s a pleasant drive deep into the great outdoors to Natalie Joy and Kevin Goff’s 80-acre farm, where the wife and husband grow sugar cane for their Mermaid Rum and rye grain for their Wild Buck Whiskey. In addition to their 400-square-foot abode, the land is home to cattle, two horses, chickens that lay eggs for the couple to sell, and 60 beehives maintained by their beekeeper friend and mentor whose orange blossom honey is also available for purchase.

It’s a destination in itself.

The Goffs have been in business since 2012. However, up until December, their facility — which hosted its first wedding last month — wasn’t open to the public for tours or tastings. You could call ahead and make an appointment to stop in, but you still had to have four-wheel-drive or a horse or make the journey to Goff Ranch by foot (if Natalie wasn’t around to graciously pick you up).

This put NJoy at a disadvantage compared to other distilleries around the Sunshine State.

“For the last five-and-a-half years, we haven’t had the benefit of having people come see what we do, and it’s like working with one hand behind your back,” Natalie said. “We’ve lost so much ground and revenue because we never had a gift shop, we never had a road. But it takes so much money.”

That road, for example — the one now connecting guests to NJoy with ease — cost the couple $15,000 to put in. And their expansion continues with new machinery and a tasting room that’s been a long time coming. Planned where the farm’s former horse stables used to be, the tasting room will come together in the next couple of months, featuring a backlit bar with stools and bottles on display.

The TV mounted in the corner aims to give visitors a closer look into how the Goffs, led by head distiller Kevin (who’s sorta like MacGyver), produce their booze off the beaten path by airing promo videos of everything from grain being crushed to sugar cane being chopped. Thirty percent of their cane is grown on-site, while the rest comes from the Clewiston/Okeechobee area; that figure can be applied to their grain, too, since what they don’t grow is supplied by Dade City's Melton family.

“People can sit down and have an enjoyable experience — maybe they get a cigar — and hang out with us,” said Natalie, adding that samplings will no longer take place inside the small child’s playhouse-turned-gift shop across the way.

Much of NJoy’s distilling process is done by hand and takes time. Again, this is not something to be rushed. But equipment like a bottle filler (in place of cheesecloth and funnels) and a used jacketed tank with a motor up top and an auger on the bottom that spins grain as it’s cooking (otherwise, your mitts are put to work) will soon help the duo refine their detail-driven approach, which calls for twice-filtered rainwater, a copper pot still and charred American oak barrels, to name a few ingredients.

It takes the Goffs 10 days to make 20 gallons of finished product, or hearts, aka the good stuff left over after they ditch heads and tails, the discardable parts of the run that “the big boys” (read: large distilleries) use to extend their volume. According to Natalie, the desirable hearts portion doesn’t burn your throat, despite its high proof.

“It’s a whole different level, and it’s a lot of work," she said of their process. "In fact, our distributor has told us, ‘You know, you guys, there’s so little profit in doin’ it the way you’re doin’ it.’ But we’re not really about the money part of it as much as we want the reputation for being true artisan, true craft.”

First came Wild Buck Whiskey, the flagship spirit aged in the distillery’s palletized barrels only once, as by law. If the Goffs were doing a blended whiskey rather than 100-percent rye, they could reuse the wooden containers over and over. Introducing Mermaid Rum, as Natalie tells it, was a way for them to offset their barrel expense.

Considered a gold sipping rum, the 3-year-old Mermaid Rum is combined with Caribbean pot still rum blended off-site for NJoy (an addition the couple discloses on the bottle’s label — not all distillers do) and aged in those whiskey barrels for 90 days to impart a little oakiness on the back end. Though both liquors are strong at 100 proof, they do stand up nicely in cocktails.

The award-winning NJoy makes Ryes in Shine Moonshine as well. Launched in December, the ’shine is exclusively on hand at the distillery in limited quantities. Yet, truthfully, they didn’t want to tap into the product at the beginning.

“The problem is that moonshine just has this negative connotation. And then you get the people that say, ‘Are you gonna put apple pie in there? You gonna put cinnamon in there? How about watermelon?’” Natalie told CL. “So we said, ‘Well, if we’re gonna do a moonshine, it’s gonna be a straight base, and it’s gonna be 150 proof... it’s gonna be the real deal.’”

No harm in that, though. Ryes in Shine unexpectedly took off — so much so that there are fans who’ve met their limit of six bottles per year per person. Customers have even taken it upon themselves to incorporate their own flavors, throwing in Red Hots or Jolly Ranches and adding the spirit to port barrels.

During our visit, hostess with the mostess Natalie presented Cathy and I with two colorful punches spiked with NJoy for tasting. The refreshing, tropical Mermaid Kiss was so good that we had to include the recipe in full (see below). If you don’t feel like whipping up a pitcher of the cocktail at home, order it the next time you’re at the Spring Hill Hooters. And who knows? Maybe it’ll join the menu of the St. Petersburg, Clearwater or Tampa locations.

The distillery’s hours are 11 a.m. to 3 p.m. Saturday and Sunday. NJoy continues to operate by appointment throughout the week.

“We hope to just continue to expand and get our local followers to understand what we do, and that’s what we need to do to build our business organically,” Natalie said. “We don’t strive to be a Jack Daniel’s and have 50 people working here. We have no interest in that.

“We just want to make a comfortable living and be able to make killer products and stay in the woods and live here.”