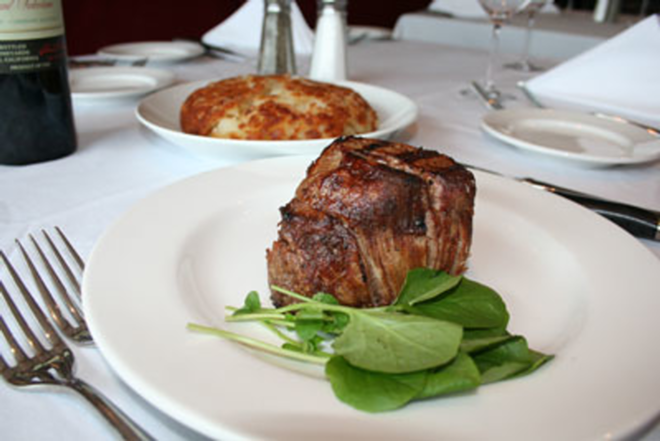 There is something intensely comforting about a steakhouse. The food always harks back to my meat-and-potatoes upbringing. Menus are often limited enough to remove the anxiety of choice from the experience. Rib eye or strip? Asparagus or green beans? It's the restaurant equivalent of yes or no questions.

Comfortable, maybe, but there's a danger in that. Simple things need to be perfect to succeed, especially in the crowded competition of the New York-style steakhouse market. Gallagher's, a new franchise in Channelside, does have a few extras to offer — dry-aged beef and a theatrical décor are two — but what about the basics?

Aaahh, I feel like I'm walking into familiar ground as I step into Gallagher's, and it's as if the restaurant hired a cast of extras to make the place feel just right. In the lounge is a group of white, middle-aged suits posturing with martini glasses and guffaws; there's another set of the same bellied up to the bar; and several large tables are taken by crews of young men in open shirts who could be goodfellas or extras from Entourage.

Gallagher's may have the simplest menu of all the upscale steakhouse chains. It's a single, uncluttered page of very familiar standards: shrimp cocktail, lobster bisque, onion soup and a few others; a short list of beef cuts. Fish is relegated to a daily special, which is almost always salmon. When I ask my server — just to be sure — he goes to ask what's available. Yep, salmon again.

Gallagher's features two glass and stainless-steel cabinets showcasing the mottled flesh of beef in various stages of dry-aging. Unattractive, perhaps, but don't judge a steak by its desiccated exterior. A three-week hang in that cold, humid space will break down connective tissue and concentrate the flavor of the meat. It can make the modern, factory-raised stuff taste almost like the fabled, flavorful beef of yore.

Even though tenderloin is too lean to dry age, Gallagher's filet lives up to the promise of those glass cabinets. I'm certain I could chew the glowing pink flesh with just my tongue, if need be, or let the meat dissolve in my mouth. Texture is why the tenderloin is prized, and this one has it in spades. But there is also significant flavor, which belies the usually bland nature of this lean cut.

My giddy beefgasm ends abruptly as soon as I eagerly chomp into Gallagher's sirloin. Yes, sirloin is a blue-collar cut, but this particular hunk is so tough (even after three weeks of dry aging) that it recalls childhood trips to Sizzler, where steaks were merely an excuse to explore the mile-long salad bar. The sirloin is a pretty steak — nicely cooked and with a good sear — but eating it, especially for $39, is work.

For that price, you do get two plump shrimp topped by a typical dollop of crab and breadcrumb stuffing, which isn't bad. But how to compare those two sea bugs with the two-pound lobster I ordered with the filet? That worthy creature was steamed perfectly and served with drawn butter so clear and bright that I was tempted to drink it. Sure, at $85 that filet-and-lobster surf and turf was more than double the price of the sirloin and shrimp, but it was also more than twice as good.

Roast chicken ($25) is adequately juicy, but has also inherited some of the stringy toughness of the sirloin, while the salmon ($28) ends up doused in overwhelming crabby Oscar sauce and slightly overcooked. Best to direct my attention to the panoply of pricey, family-sized side dishes sold a la carte in usual steakhouse fashion.

We send back the spinach because it had an odd chemical flavor — my guess is that the culprit may have been the serving dish itself. Our replacement asparagus is a bit tough and a bit cold, but still better, an even match with penne slathered in cheese and surprisingly raw garlic. Ho. Hum. It's the standard steakhouse curse — an $8 bowl of spinach or saucer of pasta has a long way to go to justify the cost.

Seven-dollar hash browns are an easier sell, especially when they're a giant dome the size of half a basketball, blanketed by a glistening, golden-brown fried crust. The hunks inside are rich and salty, and make me wonder why only the occasional steakhouse has the culinary foresight to elevate this breakfast treat into the twilight hours.

Order enough of the starters — like the tasty and unfussy crab cake ($14) or a bowl of the intensely beefy oxtail soup ($7) — and you can forget about the sides. Except for those hash browns, of course.

If you pick correctly at Gallagher's, you can have a meal able to compete with the best of the ritzy steakhouse chains. Pick poorly, and ... well, that seems like just a bit too much stress and anxiety, especially at these prices, to qualify as comfort food.