The first 100 guests to visit its newest location will have a chance to win free Walk-On’s for an entire year. 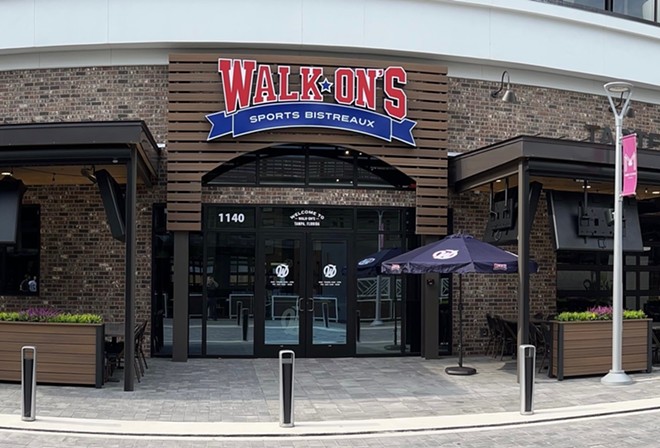 Under its motto of “Taste of Louisiana,” the national sports bar franchise Walk-On’s makes its latest Bay area debut next week when its Midtown Tampa location celebrates a grand opening on Monday, June 20.

Located at 1140 Gramercy Ln. in Midtown Tampa—on the intersection of Dale Mabry Highway and I-275—Walk-On's is best known for its massive beer list, dinner menu stacked with American classics, plethora of TVs, and family-friendly atmosphere.

Doors will open at 11 a.m., shortly after the ribbon cutting ceremony at 10 a.m.   The first 100 guests will receive a $10 gift card and coupon for a complimentary drink— in addition to the chance to win free Walk-On's for the entire year. Heavy hitters on its Louisiana-inspired menu include a fried catfish po’boy, blackened jumbo chicken “alfredeaux,” Mardi Gras mahi, hand-pattied burgers, voodoo shrimp and grits and Krispy Kreme bread pudding. Both local and national beers will be available at this upcoming Walk-On’s, alongside expected craft cocktails and wines.

There are a handful of Walk-On’s throughout Florida, including other Tampa Bay locations in Wesley Chapel and Lakeland.

The national franchise—supported by athlete Drew Brees— is quickly spreading
throughout the country, with 20 locations of Walk-On's slated open this year alone.

Follow the new Facebook for its Midtown Tampa location at @WalkOnsMidtown for the latest updates on Tampa Bay’s newest upscale sports bar.