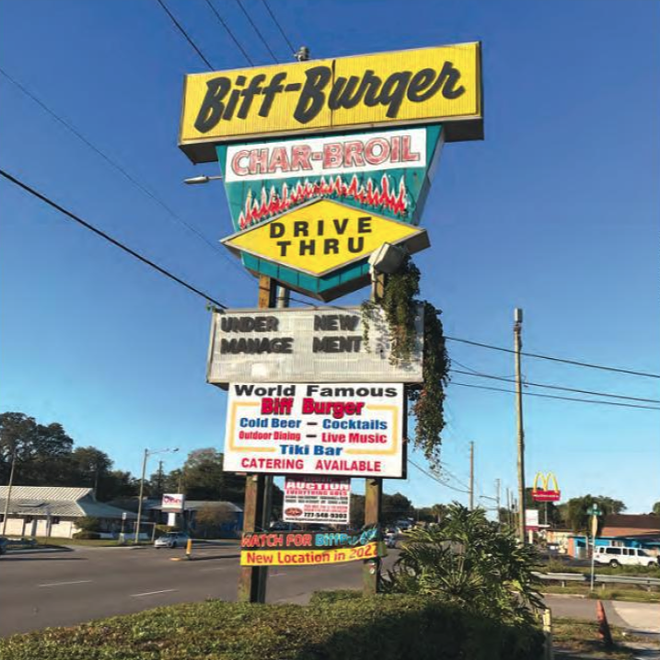 MEOLOGY™
St. Pete's Biff Burger, which will see all its assets sold off at auction.
Coming soon

Babushka’s Temple Terrace Russian restaurant Babushka’s is set to open its second location in South Tampa on Dec. 15. The new place at the former home of Hyde Park’s Boca also has an entirely different look than the original Temple Terrace spot. While the East Tampa restaurant has a quaint and cozy vibe, the South Tampa space is more, well, South Tampa-y. The “Dacha-inspired interior” embodies a vacation house or “A place where relaxation is guaranteed and the concerns of daily life remain back in the city.” Dacha translates to “cottage” in Babushka’s mother tongue, but the space is more of a fancy, well-decorated cottage than Little Red Riding Hood’s Grandma’s space. There’s a “From Russia with Love” neon sign against a vine-embellished wall with plush velvet, lush ferns, and wicker accents throughout. 901 W Platt St., Tampa. @babushkas.hydepark on Instagram

Central Park food hall Construction just began on St. Petersburg's massive Central Park food hall, and it’s not expected to open for about a year, but its first two culinary concepts have already been announced.Kojo (stylized "KOJO"), a modern Asian restaurant, and Speaks Clam Bar, a seafood-forward concept are the first of many eateries that will occupy the 24,000 square-foot, multi-story food hall. Both of these restaurants are brought to St. Petersburg by Hi Hospitality—a group founded by food hall owner Natalia Levey. 551 Central Ave., St. Petersburg. centralparkstpete.com

Biff Burger Since the mid-1950’s Tampa Bay’s last remaining Biff Burger has been slinging milkshakes, patty melts and iconic flame-broiled burgers out of its 5,000 square-foot building featuring the concept's original W-shaped roof and checkered exterior. Unfortunately, those days are history as the last Biff Burger location in Tampa Bay is closing. All remaining assets of St. Petersburg’s Biff Burger at 3939 49th St. N—including its accompanying Buffy’s BBQ—will be auctioned off on Tuesday, Dec. 7 at 10 a.m. Its Facebook page says “we’ll be back," but everything except for the building itself will be up for sale— including signs, decor, and kitchen equipment.

Tampa Oyster Fest happens next weekend, and it benefits local educators If you’re into oysters, and give a schuck about helping others, then you’ll probably want to check out Frameworks’ Tampa Oyster Fest. A GA ticket will give you access to all-you-can-eat oysters, unlimited drinks, BBQ and the event’s live music lineup featuring Fil Pate Trio, The Applebutter Express and Have Gun, Will Travel. VIP gets you the same access with the add-on of a private oyster bar and lounge seating. Tickets to Frameworks' Oyster Fest 2021 are only available in advance (translation: there won’t be available at the door). Kids 12 and under, however, get in free. Tabellas has its own parking lot, so finding a spot shouldn’t be a problem either Saturday, Dec. 12, 2 p.m.-6 p.m. $85 & up. Tabellas at Delaney Creek, 5818 Causeway Blvd., Tampa. tampaoysterfest.com—Katlynn Mullins

Straz Center's TASTE food festival returns to downtown Tampa in 2022 The Straz Center’s TASTE event is one of the best ways to sample the most popular restaurants, breweries and bars in town, all while getting a tasty view of downtown Tampa’s Riverwalk. After a two-year hiatus, TASTE—formerly known as Best of Tampa Bay—will return next spring. General admission tickets for next year’s TASTE at the Straz start at $90, but VIP($165 & up) come fully equipped with exclusive tents and earlier access to the eats. If you want to ball out with nice other foodie friends, you can purchase a 10-person table for $2,000. Browse all ticket options at the Straz website here. Saturday, April 9, 1010 N Macinnes Pl., Tampa. $90 & up. strazcenter.org/taste

Kyla Fields is the Managing Editor of Creative Loafing Tampa Bay who started their journey at CL as summer 2019 intern. They are the proud owner of a charming, sausage-shaped, four-year-old rescue mutt named Piña.

Freelance contributor Stephanie Powers started her media career as an Editorial Assistant long ago when the Tampa Bay Times was still called the St. Petersburg Times. After stints in Chicago and Los Angeles, where she studied improvisation at Second City Hollywood, she came back to Tampa and stayed put.She soon...
Scroll to read more Openings & Closings articles