The once itty-beer beer scene is now a mecca of craft beer. 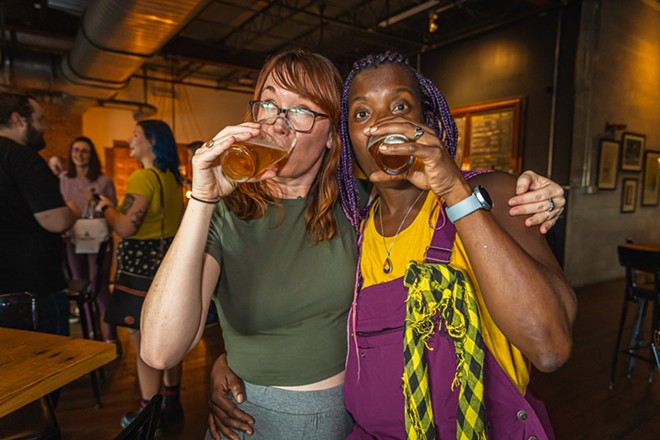 Photo by Dave Decker
Kat Kane (L) and Kendal O’Neal of 7venth Sun Brewery at Coppertail Brewing in Ybor City, Florida on July 13, 2022.
Tampa Bay’s craft beer scene is technically old—like, really, really old. You can see the beginning of it in Ybor City, too, near the corner of E Fifth Avenue and Nuccio Parkway. That’s where, right next to Government Spring, Ybor City Brewing Company was founded in part by Vicente Ybor himself.

The facility was soon sold, renamed The Florida Brewing Company and became the home of La Tropical beer, which launched in 1897. Naturally, the Tampa beer became the largest brew exported to Cuba. Prohibition put a pause on that (in 1928, Salvador Martinez Ybor was sentenced to six months in jail for illegally distributing alcoholic beverages), and the place reopened in 1933 as Tampa, Florida Brewery before eventually shutting down as a result of the Cuban embargo and the opening of Anheuser-Busch.
These days, Barriehaus is the closest brewery to the old Florida Brewing building and just a four-minute walk away. There are even more breweries just a few blocks further (TBBC, Zydeco, Bastet, Coppertail). And beyond that into greater Tampa Bay? More than a hundred.

But what about in 2001? Tampa Bay Brewing Co. (now TBBC) was just six years old. It would be another six years before Joey Redner founded Cigar City Brewing and more than a decade until the late, legendary Greg Rapp opened his taproom (still open in Seminole). Most of the local craft beer drinking those days was being done at Dunedin Brewery, a pillar of Tampa Bay’s local scene and the oldest microbrewery in Florida (also not-so-secretly one of the best places to catch a free concert around here).

But something of a turning point arrived 21 years ago.

That’s when an archaic Florida bottling law—which limited bottle sizes to 8, 12, 16 and 32 ounces—was amended. While the American craft beer world started to boom (and packaged stuff in 22 oz. or 750 ml bombers), Tampa Bay’s was just getting started. But 2001 (and really in ‘07, thanks in huge part to Cigar City) was when our beer scene started growing legs.

These days, there’s literally something for everyone and a seemingly endless line of brewers ready to talk about it.

Creative Loafing Tampa Bay recently spent a couple hours with more than a dozen of them during a private event on the second floor of Coppertail Brewing.

With an influx of people moving to area every week, CL simply wanted to know how someone new to the local craft beer scene (be they new to drinking after turning 21 or simply new to the area) might best connect to everything it has to offer so that they could learn to love it just like the locals do.

That was most common response back to the question, and Tampa Bay’s local beer experts were all ready to point us in the right direction 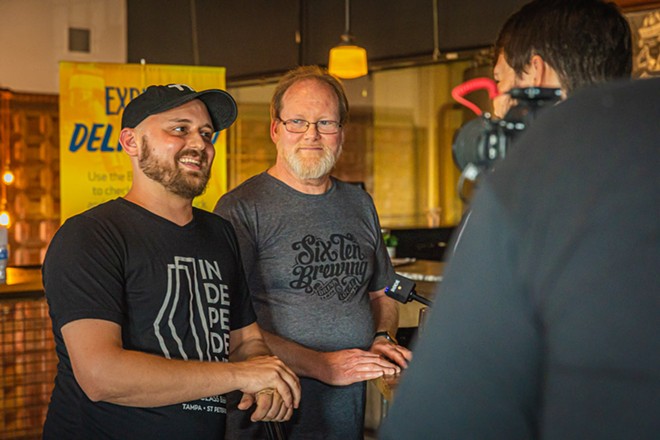 Photo by Dave Decker
Clay Parkinson (L) of Independent Bar and Cafe Tampa and Chris Johnson of Six-Ten Brewing at Coppertail Brewing in Ybor City, Florida on July 13, 2022.
“If you like lagers, you’re going to Barriehaus, that’s the brewery’s brewery when it comes to that,” Kat Kane and Kendal O’Neal of 7venth Sun Brewery—which has locations on opposite sides of the Bay in Seminole Heights and Dunedin—said.

“They’re killing the lagers right now,” Clay Parkinson, manager at Independent Bar and Cafe in Tampa added about the Ybor brewery that opened in 2019. “Now, if you’re visiting from the airport and just have a few hours, it’s Six-Ten for sure. New World Brewery was serving their beers years ago.”

If you’re on the other side of lager, Parkinson suggested Angry Chair, which is about to complete a move from its small Seminole Heights flagship to a new, larger space a few blocks away.

Veronica Danko, who founded Independent more than a decade ago, agreed. “When you work your way to some heavy hitters, barrel-aged type of stuff, you’re definitely going to Angry Chair.”

Danko also pointed to Barriehaus as a great entry point for someone looking to get acquainted with the local beer scene. But she gets on her bicycle and also heads to Zydeco Brew Werks and Coppertail when she’s in the district.

Lauren Morrison, marketing and events director at Barriehaus, takes her tastebuds to Magnanimous in Tampa Heights where the lovely and hilarious staff has not only created a very inclusive atmosphere but also some of the most fun, and flavorful, beers in Tampa Bay. 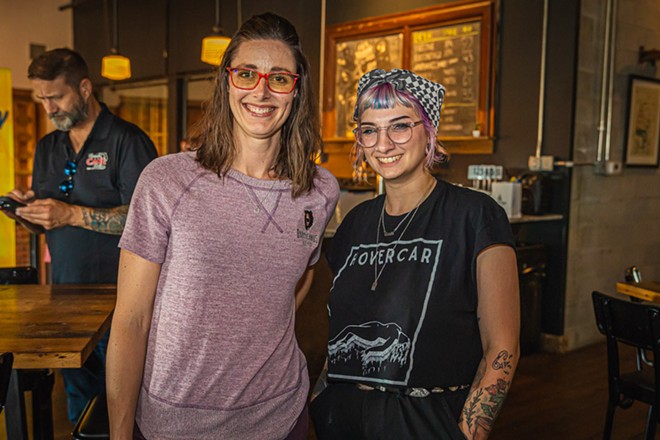 Photo by Dave Decker
Britney Barrie (L) and Lauren MOrrison at Coppertail Brewing in Ybor City, Florida on July 13, 2022.
Britney Barrie, co-founder of Barriehaus, hands down says you can fall in love with Tampa Bay’s beer scene in Ybor City. Her go-to spot in the neighborhood is Zydeco. “You can always have excellent beer but also excellent food. If you're in the mood for a cocktail, you can have that, too, but Paul Rutherford, the brewer there really knows what he’s doing and has just great representations of each of the styles of beer,” Barrie said.

But if he was an out-of-towner who could only visit one Tampa Bay brewery that wasn’t his, Zydeco owner J. Paul Pepin would hoof it across the bridge from Ybor to St. Petersburg where Green Bench Brewing Co. is approaching a decade on Baum Avenue.

“I’m drinking their sour program, really anything Khris Johnson is making in those barrels. To see what he’s done with that program is phenomenal. He’s mastered the yeast and souring process. I’m a sour guy and if I’m drinking a sour in the Bay area, that’s where I’m headed,” Pepin said.

J. Paul Pepin of Zydeco Brew Werks at Coppertail Brewing in Ybor City, Florida on July 13, 2022.
Huston Lett, who co-founded Bastet Brewing just a half-mile from Coppertail, would also head to Green Bench, but not for the sours.

“It’s definitely the best of both worlds over there,” Lett said. “They have a huge lager program, it’s a toss up between Barriehaus and them, but they are making the best lagers in Florida. And they have those fermented sours. Between there and their sister project Webb City Cellars, Green Bench is my favorite.”

But for the big picture on the Tampa Bay beer scene, you want to talk to the two Tims: Tim Shackton of Ulele and Tim Ogden, a Cigar City alum who worked on Tampa’s legendary Tocobagga Red and will open Deviant Libation in Ybor Heights this year. 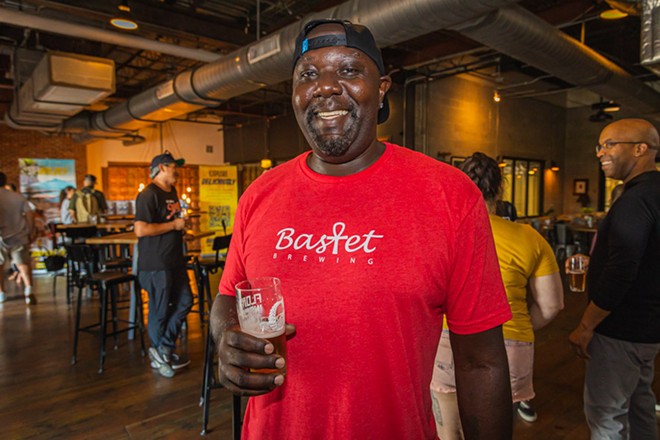 Huston Lett of Bastet Brewing at Coppertail Brewing in Ybor City, Florida on July 13, 2022.
The front door of Shackton’s brewhouse overlooks the Tampa Riverwalk and what’s easily the most commanding stretch of the Hillsborough River. His outlook on the beer scene is that of a wide-eyed explorer. He loves the micro beer communities in places like Dunedin, but keeps it simple when it comes to his advice.

“The cool thing to do is to encourage people to get out of their comfort zone. Go into a place you've never been, bring your loved one and check it out,” he said.

Ogden agrees, and for him, it’s also as simple as just showing up and respecting your curiosity.

“Go to different places, try different things. Talk to the people at the brewery. Ask the bartenders about the things they like, and if you make a connection to anything, music, beer, whatever, just talk to people,” Ogden said. “Follow your curiosity.”

And before you know it, you’ll feel like a local, too, because as Shackton says, “There’s always a home for you somewhere.”
click to enlarge 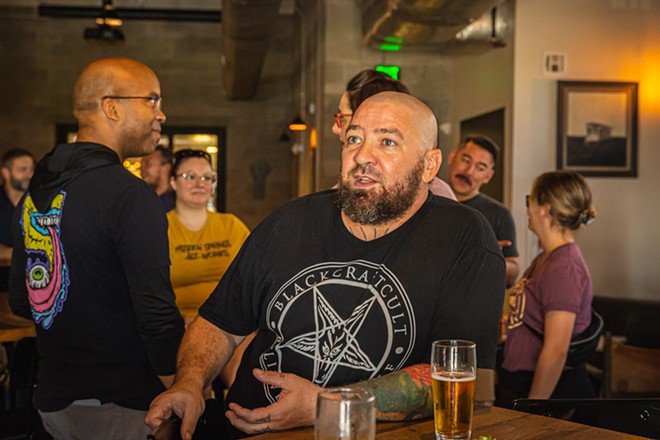