What did Alton Brown think of four Tampa Cuban sandwiches? (with video)

The Food Network star said he was surprised by his blind taste test.

Alton Brown via Facebook
Culinary personality and author Alton Brown dug into a few Tampa Cubans before his stop at the Straz.

Alton Brown trusts his fans to tip him off to stellar places for grub while he's on the road. So after the Food Network star reached out to Tampa for recommendations on where to get the best Cuban sandwich via social media, he put four of their suggestions to a blind taste test.

The evaluation — conducted and filmed on Brown's tour bus Friday ahead of his Eat Your Science appearance at the Straz Center for the Performing Arts — highlighted Cubans from the West Tampa Sandwich Shop, La Segunda Central Bakery, Brocato's Sandwich Shop and Columbia Restaurant, anonymously labeled with the letters A, B, C and D.

But they weren't what the culinary personality and James Beard Award-winning author expected.

"I've gone on the record many times as saying that the Cuban sandwich is my favorite sandwich on earth," says Brown in the video before breaking down the ingredients that define a Tampa Cuban (roast pork, salami, ham, Swiss, pickles and mustard), and briefly touching on the iconic sandwich's hotly debated birthplace.

Among the highlights, which include critiques as well as praise: Brown calls out two Cubanos for their "greenery," a.k.a. lettuce and tomato. Mayo — or maybe butter? — is found on one sandwich that's decided to skip the salami. And he ultimately proclaims that there isn't a perfect Cuban in front of him. 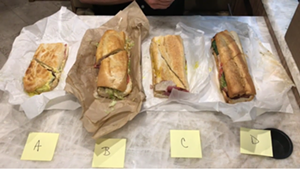 Alton Brown via Facebook
We know the identities of sandwiches A and C, but B and D are unknown — at least in the video.

"So I'm gonna have to go with the most classic sandwich that I see here, and that is going to be I think probably C. I'm gonna give this another bite," he says.

"C is what I would call the most classic Cuban here. None of them are the best Cuban that I've ever had, which surprises me just a little bit."

Which food spot was behind sandwich C? Ybor City's Columbia.

According to Brown, he was intrigued by A, built by the West Tampa Sandwich Shop, but the sandwich was missing "too many of the elements of a true Cuban."