Though he struggles with homelessness and addiction, Skunk just wants to start a band. 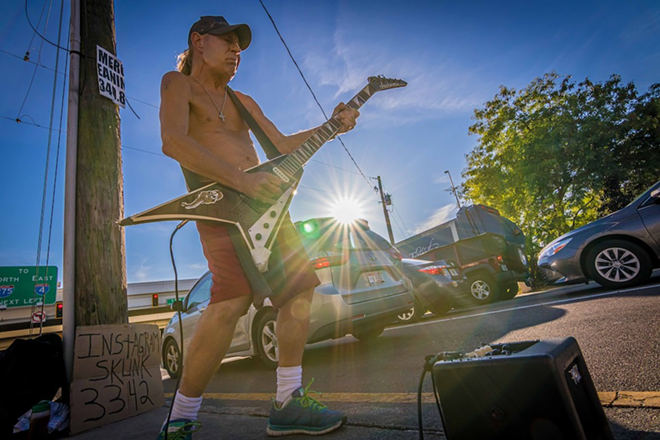 It's rush hour in downtown Tampa and 55-year-old Steven Ray Wilson, a.k.a. 'Skunk' is playing his heart out on his Flying V guitar.

Phones poke out of car windows to take pictures and video. Skunk likes that. He's trying to network and get his image out there so he can start a band. Next to his guitar rig is a cane with a glowing skull and a cardboard sign that reads "INSTAGRAM SKUNK 3342."

He's shirtless in the hot sun, long blonde hair hanging down his tanned back. He's wearing a gray hat that says "cheers." A silver cross necklace hangs around his neck.

Heavy metal riffs blare through his battery-powered amp, as his traffic bound audience stares on. "I'm having a fucking blast,” he says. "Some of the guys won’t roll down their windows because their girlfriends will look at me."

A window comes down and a smiling face holds out a dollar bill. Skunk stops playing and walks into traffic to grab it, just before the light turns green and the cars move south down Tampa Street, crossing Kay Street.

Skunk has been playing guitar since he was 13. About a year ago, he decided to ditch his acoustic guitar and start shredding electric. His original spot was under the I-275 overpass at Hillsborough, but he was trespassed for soliciting and obstructing traffic, so he moved to downtown. In September he was arrested for sleeping under the I-275 overpass near Kay and Tampa Street. He says the police told him that the trespass they previously gave him extends to all underpasses in Tampa.

"I got too drunk while I was playing and I fell asleep over there after," he says with a grimace. "They woke me up. I spent two days in jail. Had to walk all the way back to the city from Orient road."

Skunk started drinking heavily about 30 years ago. His drinking increased when he was suffering from depression and playing in bar bands. His struggle with alcoholism led to him being homeless for the past six years, but through Agency for Community Treatment Services (ACTS), which helps people with substance abuse and mental issues, he got a place to stay in the middle of November.

“It feels great man, having a place to stay and practice my craft,” Skunk says through a broken smile. “Now I just gotta get a band goin’.”

He says wants his band to be called “Pigs In Mud” because he’s happier than one. Some of his Instagram posts include pictures of pigs, with “oink.!!!” as the caption. Recently, he found God, so some captions include “God bless/Skunk at large!!!” He doesn’t go to church, but Skunk says he’s spiritual.

His ultimate goal is to be a touring musician playing large venues. He wants to market Pigs In Mud as “Tampa’s worst rock band.” He likes to jam at home with his friend George Kerr, another Tampa guitarist who plays acoustic songs on Florida and Hillsborough. At Skunk’s place, Kerr plugs in his electric guitar and shreds with Skunk. They’re looking for a drummer.

But Skunk wants anyone who joins his band to be aware, “It’s my nightmare, I’ll just pay you to participate.”

In his new apartment at the corner of Fowler and 15th Street, Skunk practices his art. Kerr and Skunk are working on writing new songs together. After years of living life rough on the streets, he has a place where he can retreat. Like anyone who has experienced homelessness, Skunk is very thankful to have what so many take for granted.

“It’s a beautiful thing, to have a real place to rest my head and work on my dreams,” Skunk says.

Skunk was born in Pensacola in 1964, and moved around with family before ending up on the street after his parents passed. His two brothers didn’t help bury his mother so he doesn’t talk to them anymore. He doesn’t stay in touch with any other family. When he was younger he flipped burgers, washed cars and worked a forklift. 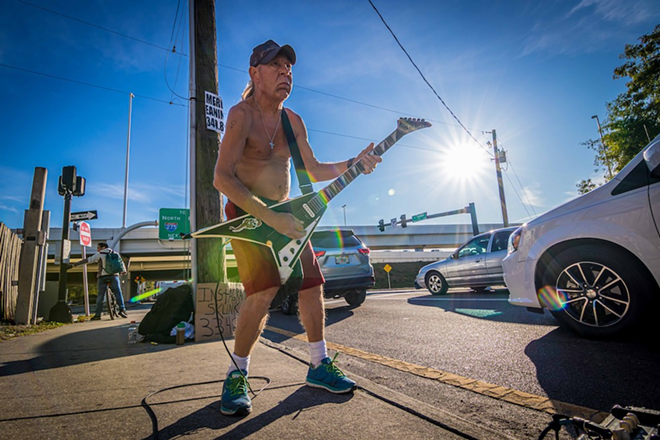 He never kept a job for more than a year though, he says. The straight life didn’t suit him. About 15 years ago he decided to ditch the day jobs and “go professional,” playing for rent and eventually living on the streets of Orlando, Tallahassee and Tampa.

His struggle with alcohol intensified when he was living on the streets. He would sometimes drink all day for days in a row, ingesting “gallons” of alcohol a day. According to the National Coalition For The Homeless, “In many situations, substance abuse is a result of homelessness rather than a cause. People who are homeless often turn to drugs and alcohol to cope with their situations.”

On a slow day jamming on the corner Skunk makes 10 or 20 bucks. Sometimes he gets big tips, 20 and 50 dollars. This gives him enough to eat, ride the bus and buy cigarettes. He still has cravings for alcohol but is really trying to control himself.

“When I’m alone and I get a moment to smoke a little bud,” Skunk says through a grin, “I like to sit back and think about all the things I’m getting in place right now.”

Stressed rush hour drivers seem to light up when they see Skunk play. Many of them know his name and call out to him with big smiles. On one afternoon, a motorcyclist pulled off the road to air guitar alongside him. Skunk says he realized Tampa has the music scene he’s been looking for, and he wants this to be his home for a long time.

“Look out, Tampa," says Skunk, "'cause things are coming together for your favorite rocker!”