Earthdance everywhere is different, but the Florida version of the festival is sure to turn heads this year with it's incredible production.

Imagine, if you will, a worldwide party. All the way from the Himalayas, to London, to Lakeland; Earthdance occurs simultaneously in hundreds of locations across 60 countries around the world. On Saturday, all of this energy ultimately culminates into the global Prayer for Peace. The website says this occurs at “morning in the Australian rainforest, afternoon in California, dusk in Florida, midnight in London, and sunrise over the Himalayas.” The goal of the Prayer, a non denominational prayer for all people, is to try to erase those longstanding borders between countries and between people. The Prayer is available in its entirety here, and it serves as a beautiful rallying cry between people of all races, religions, and nationalities.

While every Earthdance is a little bit different, the Florida Earthdance will feature jam, EDM, and a touch of funk; plus a long list of incredible workshops and a fire stage by the Atlanta based fire/entertainment company, Incendia. We sat down with Earthdance Florida founder and co-producer Belinda Pettinato, and her husband and accomplice, Patton Gibson. 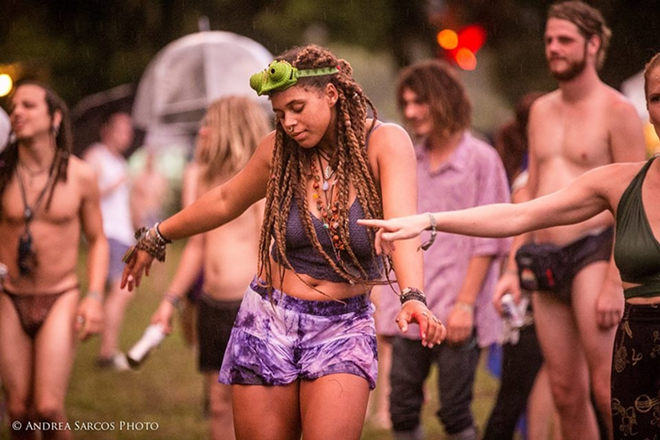 What are your roles with Earthdance?

Belinda:  I am the founder of Earthdance Florida. I’ve been doing Earthdance Florida since 2009. We have been at Maddox Ranch, our home, since 2011, so we are going on seven years now at Maddox. I was the only producer and have taken on a wonderful partner this year. His name is Shaun Berbert. He lives in Tennessee and is a dear friend. He is the producer of a regional burn that takes place in Tennessee every year called Serendipity.

Patton: He was also instrumental in the All Good Festival, and he’s got 20 or so years of experience in this kind of thing. He’s a dear friend and we’re happy to have him on board.

Belinda:  Patton, here, is a very large support in what we do and we actually have a family together. I have my daughter and then we have a child together that is 14 months, so he plays a huge role in just supporting the event and our family in general.

Patton:  I prefer to not have a role in Earthdance, but I do have about 20 years or so of production experience myself. But as far as the final product, it is Belinda’s production and I try and kind of stay in the background.

From what I understand, Earthdance is a little bit different of a festival, mostly due to the fact that it happens all over the world?

Belinda:  It does! Every event is different, it’s by a different producer so it could take on different forms but it all has the one purpose of gathering together for world peace and sharing in that global synchronized prayer for peace at the same exact moment, but they’re all very unique in their own ways. 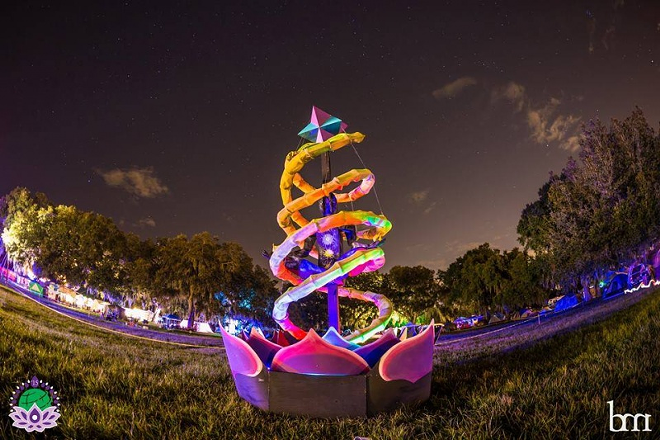 Can you tell me about the prayer for peace?

Belinda:  Sure! It’s a soundtrack that plays all at the same moment all around the world. So, our time takes space on the Saturday of Earthdance, because at this time there’s hundreds of Earthdance’s happening the same weekend, but our time is 7 p.m. on September 23. In London it’s midnight, Australia is 6 a.m., just to give you the aspect that it’s happening in synchronicity, it’s all happening in the same moment. It’s a beautiful soundtrack that lasts about 5 minutes long, you can find that on our soundcloud. It states the intention of why we’re here together, why we’re dancing, healing, praying as one, and it gives people goosebumps, it makes people cry, I literally cry every time. It’s become a tradition where people get in a huge circle and hold hands at the same exact moment and then the prayer happens. By the time the prayer ends the DJ puts the next track on and everybody just goes wild and starts dancing and just enjoying that moment of freedom and peace and sending their intentions out to the world. You’re connected with all the other Earthdance’s with the same intention. It’s just so powerful.

You guys have a lot of workshops going on that look really awesome, and a whole bunch of artists. What are some of the workshops that you’re excited for this year?

Belinda: Oh goodness, yeah okay. We have the full list of the workshops coming out in a couple days, but I’ll give you some insight on this. We have Mitchell Gomez, the national director of Dance Safe, and he is going to be kicking off the main stage with a inspire your community talk, along with a harm reduction class in our workshop space. We have many yoga classes with Karina Sky and the DJ Living Lights (Eartha Harris.) We have VibeStreet, which goes by Ben Davis, one of our DJ’s, he’ll be giving a heartwarming discussion on the law of attraction, as well as Ania Amador, who is our art director. There will also be many panels going on, discussions of our visionary artists so people can ask them questions and discuss, along with an Earth Skills panel with our friend from Rooted Intentions that’ll sit there and discuss many subjects on environmentalism. We also have our sacred fire and drum circle panel going on. There’s just so much. We have a didgeridoo workshop, many drumming workshops, we even have an aerialist, Suzanne Curry, that’ll be giving an aerial silks workshop. We also have nightly drum circles starting at midnight going until the wee hours of the morning. The list goes on. Bobby Brown, a wonderful hoop artist, will be doing hoop classes. That’s just to name a few but you’ll see when the list comes out on Thursday 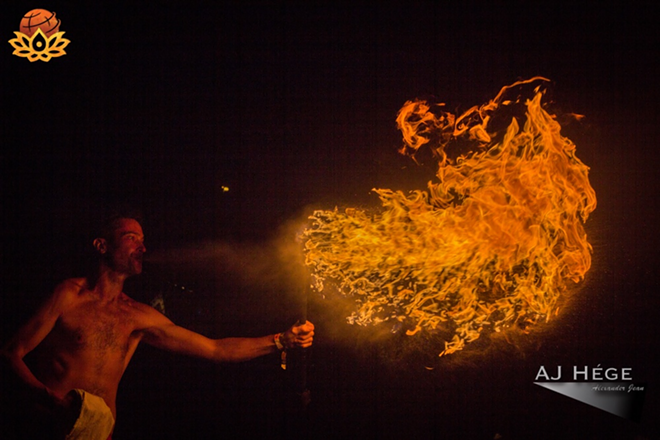 I saw something about the free range silent disco, can you tell me a little more about that?

Belinda:  We’re actually really excited about that, it’s our first year of them coming. They are called Free Range Disco and they have 300 of these headsets that will be connected to our stages and our workshop area 24/7. What’s amazing about it is you can roam anywhere, it’s not like you’re in front of a stage doing the silent disco thing, these are headsets connected to all the main activities going on the entire event. You can be anywhere on the 80 acres of property and tune in to any one of those stages. They are available on the website and if there are any left, they’ll be right at the ticketing booth up front. I think there’s about ⅓ left.

It says on your website that this year will have the most advanced production to date, what are you guys adding or most excited about?

Patton: The LED screen is very special, it’s actually very hard to get one of those in the state of Florida because they’re usually booked out years in advance and we got lucky at the last moment with the full LED screen and full 3D visual projections

Belinda:  I’ve got a visual artist by the name of Keith Anderson, he goes by Fractal Visions out of California. He’s done many things with Polish Ambassador and Govinda and many of the artist we have on the billing. He has a lot of special effects in the works for this.

Patton:  He’s producing personally the visuals for the screens for Earthdance, art he’s creating new just for the show. I see that Earthdance donates a large portion of profits to charity each year, and ya’ll had mentioned before about doing something to help out with Irma. Can you tell me a little bit more about that?

Patton:  Earthdance always donates to charity, that’s a given, we always do. Right now, this year is a little different. We are floridians and have been here all our life, been through many storms, and in my life I have never prepared in far in advance or as much as we did for Irma. Once we realized how devastated parts of Florida were, we made an executive decision, really within a span of eight hours between us and our partner Shawn, that the State of Florida needs us. We are Earthdance Florida. We have made the decision to donate 50 percent of the profits from 2017 to the Florida Disaster Fund. In addition to that, we know a lot of people may be sitting there and may not have a comfortable place to stay, they’ve just been through alot and have a lot of extra hurricane supplies, so what we’ve offered to do is offer discounted tickets to the residents of Florida because we know everybody here has been affected by the storm and we’ve put out a coupon for 30 percent off a full weekend including camping and we’ve already had such great response to that. We put messages out and it’s just been so overwhelmingly powerful.

After a large tragedy like that, having everybody together and dancing in a moment of peace would really be nice.

Patton:  People need a break right now, so we’re trying to offer them a financial break to come out and camp for the weekend and have a good time.

I really really respect what you guys are doing, and I love the idea of Earthdance and can’t wait to experience it for the first time. I don’t have any more questions for you guys right now, is there anything else you’d like to add?

Belinda:  Yeah, definitely I did want to add that a large part of our production is not just about the music or the workshops, it’s also about the artists too, the visual artist, the painter's. I feel that all of them are very equal, the presenters, the musicians, the artists. We’re really excited about the large scale murals that are being painted by about 20 artists on site during the whole time.

Patton:  That reminds me, we were going to need about 70 sheets of plywood to build the art tree that the live painters will be painting on and it came to our attention that the state of florida is out of plywood. We can’t buy it anywhere. So I made a couple calls and we now have an organization that’s going to be donating the 70 sheets of plywoods that we need to construct the art area and we’re very thankful for that. I actually still have to get back with them, I asked if we could wait until Irma passed over and we are just o thankful for that. I don’t want to throw out their name without speaking with them first. It’s just wild.

It really is incredible how tragedy brings people together. Thank you guys so much again for giving me the time.

Belinda: Of course, we appreciate it Michael.