Brian Wilson, Al Jardine, and David Marks will not be present at Ruth Eckerd Hall. 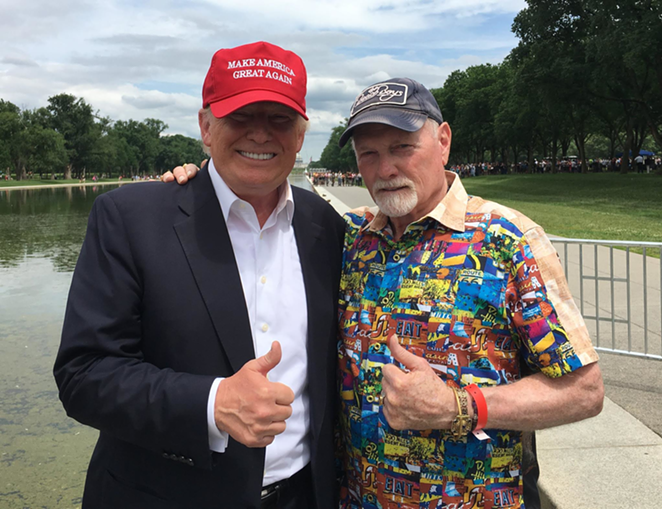 It’s no secret that there’s a rivalry between two of the sole survivors of the Beach Boys, and Tampa Bay fans can see one iteration of the group this summer in Clearwater when pompous asshole Mike Love comes to Ruth Eckerd Hall on May 16.

Despite a lifelong struggle with schizoaffective disorder, original bassist and all-around genius composer Brian Wilson still records new music (his most recent is 2015’s No Pier Pressure). When he’s on the road, Wilson arrives with a 10-piece band, and Beach Boys alum Al Jardine and Blondie Chaplin, with him. Wilson recently wrapped up a massive world tour in which he performed his 1966 magnum opus, Pet Sounds, cover to cover, for the last time ever. Or so he says.

Cousin Mike Love, who sued Wilson back in the ‘90s for not being credited or paid for songs he allegedly co-wrote, owns the right to tour under the Beach Boys name. Along with him is semi-original member Bruce Johnston, and for some reason, Sugar Ray’s Mark McGrath, and John Stamos join in during some appearances. A guest star-free version of The Beach Boys, circa 2021, is the one coming to Ruth Eckerd Hall on May 16 for two separate sets. Tickets for the 5 p.m. and 8 p.m.shows start at $53.25 and go on sale this Friday, March 5 via rutheckerdhall.com.

If you’re a ride-or-die Beach Boys fan who respects “God Only Knows” as much as “Kokomo,” you rock on. But just keep in mind that last February, Love and company were the entertainment at a trophy hunting gala hosted by Donald Trump Jr. Let’s just say that upon finding out, cousin Brian was furious, even encouraging fans to sign a petition getting Love to back out of performing.