The band celebrates with a Feb. 19 release show at Hooch and Hive. 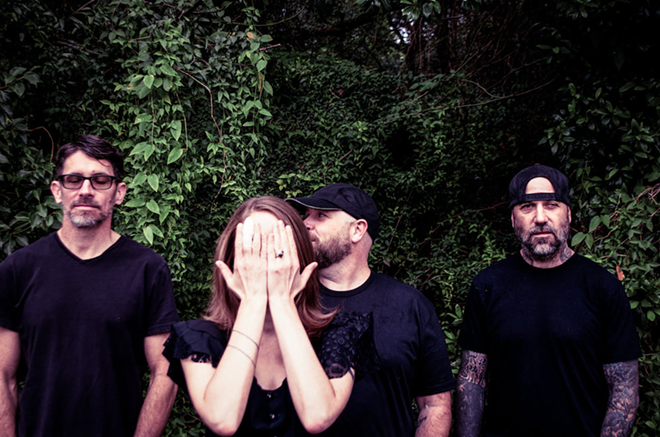 Bryant Martinez
(L-R) Navin Ave is Adam Revak, Shae Krispinsky, Derek Forrester, and Jeff Brawer.
Shae Krispinsky’s name should sound familiar to anyone with even a passing interest in the local arts and music scene. More commonly recognized for her folk-pop solo work, she’s also a writer of fiction, poetry, and music and she’s consistently served as one of the brightest and most captivating artists since her move to the area in the late 2000s.

In what’s arguably the most fascinating (and certainly the most ambitious) project the native Pennsylvanian has ever embarked on, Krispinsky and the band she fronts, Navin Ave., are about to release a debut album, Book 1- A Little Warming. As the title suggests, the band’s initial outing will serve as the first in a series of releases. Krispinsky and her husband and musical partner Derek Forrester told Creative Loafing Tampa Bay the album is the first installment in a trilogy of releases over which an ongoing story will unfold.
Some of the songs go back to Krispinsky’s days with Forrester as part of the now defunct local band, ... Y Los Dos Pistoles. “Some of the songs didn’t fit that band, and then we broke up” Krispinsky reminisces.

Wisely opting to keep the songs in the hopper for use on a future project, the sometimes-bashful artist excitedly said that some of the inspiration for the project and its song concepts came in part from the 2015 HBO docu-series “The Jinx: The Lifes and Deaths of Robert Durst” (which chronicles the real-life murders committed by Durst, a serial killer). But it was a recent, odd encounter with an unwavering bird that inspired Krispinsky to push forward with the project. While exiting her vehicle at a local grocery store parking lot, she became intrigued while observing a resolute crow that just wouldn’t fly away.

“This has to mean something” she thought at the time. Intent on finding the relevance of this run-in with the stubborn avian, Krispinsky discovered that crows are regarded as the guardians of the underworld which sparked her creativity and helped her flesh out this musical venture.

As a landscape for this first chapter of the band’s musical saga, Krispinsky describes the scene as one that encapsulates a “Southern gothic” motif; that is, one rich with murder, moonshine, religion, fire, bayous and, yes, crows.
“It’s a journey through a section of America where she [the story’s central character] faces all the ways we have to kill off parts of ourselves in order to live in the world. As we grow, we have to kill off a part of who we are,” she explained. Pressing for more insight, and inquiring if she was referring to either an emotional or spiritual type of self-realization, Krispinsky acknowledged that both of those factors play significant roles in the characterization.

Movement and location are relevant to the scenery, too. “When I’m traveling, I’m always observing and noticing locations. Places and settings inspire me” Krispinsky admitted while detailing the changing locales that serve as backdrops for the progression of her musical novel. Book 1 opens in western Pennsylvania (the area from which the writer hails) and winds through southeastern Virginia. The forthcoming musical installments will continue in that vein where travel and movement are integral to the plotline.

Musically capturing the mood and feel of the drama that ensues over the course of the songs had to be a challenge in itself. Forester, lead guitarist for Navin Ave. offered his view of how the music supports the atmosphere of the narrative.
“I use the guitar as a call and response” he said in describing his approach for creating the musical accompaniment for the storyline. “It’s more of a coloring or feel than a guitar part. The idea is that it’s a second voice in a style that fits and supports the emotional context” he went on to say.

“We play off each other’s strengths” Krispinsky added in comparing the solitude that is prevalent in authoring a novel versus recording an album with a group. In the capacity of songwriter, it’s common for Krispinsky to write acoustic melodies and then hash out rough demos for compositions before bringing them to the band. A sense of wonder and amazement is noticeable when the singer-songwriter describes the developmental stages and how each band member added their own flavor to the music.

“I don’t dictate to others what their parts should be; everyone can hear their own parts…and I trust them. Everyone brought things to the music” she gushes when describing her bandmates—including Jeff Brawer on bass and Adam Revak on drums (who took over after Rodney Smith, the group’s original drummer who plays on the album, moved away from the area). “And I’m so grateful for them” she added.
Gratitude was also expressed by the couple when describing the guidance and assistance they received from another local musician, Shawn Kyle, who recorded and mixed Book 1- A Little Warming. “He made us sound good!” Krispinsky laughed. “He’s so patient and meticulous; he suggested things we would have never thought of” she added. “He never got flustered. He was upbeat and friendly, and he sat all day with us” she stated while describing the recording process.

When asked if the idea was always to create a three-part series of recordings, both Krispinsky and Forrester quickly replied. “No! It was originally going to be three EPs with five songs on each of them. Now it’s become three albums with 30 songs” Krispinsky stated before Forrester added jokingly “…which is perfect for today’s attention span!”

Not surprisingly, as Krispinsky thinks of herself more as a writer than a musician, the literary aspect of the album’s concept isn’t being overlooked. The band intends to create music videos for each of the 10 songs on Book 1- A Little Warming that contain accompanying song lyrics as they are integral to the overall storyline. Additionally, a limited edition, uniquely packaged version of the album will be available, too. A small run of physical CDs housed inside a clamshell DVD case and including two printed booklets will be unveiled and sold at the band’s album release show which will occur on the Feb. 19 release date.

Drawing from a variety of influences, the creation of this ambitious project didn’t fully dwell on dark, morose subject matter. Recalling the band’s stab at emulating pop glam hair metal band Poison in an installment of the annual local fundraiser concert Fangsgiving, both Krispinsky and Forrester spoke of the Talk Dirty to Me band in the fondest terms and admitted that, sometimes, those ‘80s power ballad guitar solos find ways of creeping into their consciousness when creating music.

Don’t expect any hair metal covers on any of Navin Ave.’s trilogy of albums but rest assured that the originality and creativity that’s being invested and poured into the project guarantee end results unlike anything the local music scene has seen or heard before.

I was born on a Sunday Morning.I soon received The Gift of loving music.Through music, I Found A Reason for living.It was when I discovered rock and roll that I Was Beginning To See The Light.Because through music, I'm Set Free.It's always helped me keep my Head Held High.When I started dancing to that fine, fine...
More
Scroll to read more Local Music articles
Join the Creative Loafing Tampa Bay Press Club