Too marvelous for words. 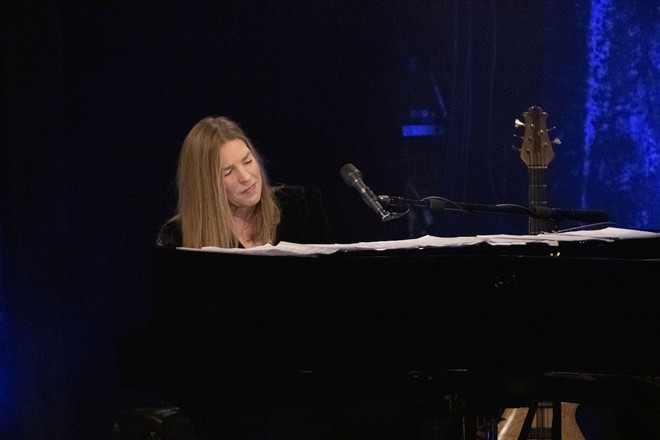 Friday night at a less-than-sold-out Ruth Eckerd Hall, Diana Krall admitted that her dim-lit stage was a tad bit annoying. “I can’t really see these papers,” she observed, before kicking into “The Look of Love.”

The slightly enigmatic 57-year-old jazz singer is currently in the midst of a brief run of U.S. shows, before spending her July overseas in Europe. She hasn’t performed as much as some artists have since live music has returned, but it’s still comforting to know that she was surrounded by music during her time in lockdown with her husband, Elvis Costello.

Truthfully, you’d think that you were walking into a modern-day Bob Dylan show. There was no elaborate stage setup, cameras technically weren’t allowed, and the name on the bill was going to be propped behind a grand piano—naturally. At about 8:15 p.m, Krall, clad in a black dress, marched straight over to her stage right piano and performed a few bars of “Where or When” from the “Babes in Arms” musical, before the band kicked in to support her on “I Don’t Know Enough About You,” a Peggy Lee song.

“All or Nothing at All,” made famous by Jimmy Dorsey and his Orchestra (yes, Tommy’s brother), was one of the earliest examples we had of how the instrumentation was going to be executed. After Diana’s first set of vocals, jazz guitarist Anthony Wilson did some masterful work on his Monteleone jazz electric, which looks staggeringly like a Gretsch from a distance. Then, there was upright bassist Robert Hurst, once a member of Jay Leno’s "Tonight Show" band, thumping and plucking away. On the drums was Karriem Riggins, who more times than not, mainly kept time, but did get at least three opportunities to rip out solos that had all eyes glued on him.

The solos plucked, banged, strummed, and slid out by Diana’s backing band were mostly sandwiched between her vocals. There was only one solo “slid out,” which was when Robert Hurst took a bow to his bass during “East of the Sun (and West of the Moon),” which was once recorded by Tommy Dorsey and an up-and-coming Jersey boy named Frank Sinatra.

Krall knows damn well who she is, but her ego is far from over-the-top. She didn’t have the gigantic spotlight set on her, while the rest of the band was tucked away in some sort of dimmer light. Every light above was exactly the same amount of dim, except for in between songs, when Diana would either introduce the next song, or just reveal secrets, like how her husband is currently working with Burt Bacharach or…

“I don’t know if I’m supposed to tell you that,” she admitted.

It was a great way to open “The Look of Love,” written by the iconic songwriter and the late Hal David in 1967. It originally appeared in the 1967 version of “Casino Royale,” long before Daniel Craig or Chris Cornell made names for themselves. With that factoid in mind, it’s a struggle to not help but wonder what a Krall-ified version of Cornell’s “You Know My Name”—from the 2006 “Royale”—might sound like.

Like any Krall show, the rest of her setlist was mostly wall-to-wall, modern-to-an-extent jazz standards. “More Than You Know,” which appears to have not been played since 2015, was described by her as “quite nice.” Her rendition of “I Just Found Out About Love,” made famous by Nat King Cole, was based on a version she heard by her friend, the late Shirley Horn. And not that it’s a jazz classic, but Joni Mitchell’s “Amelia,” where the band’s contributions were subtle at best, was a great contribution, especially considering how it was followed by Irving Berlin’s “How Deep Is the Ocean (How High Is the Sky).” 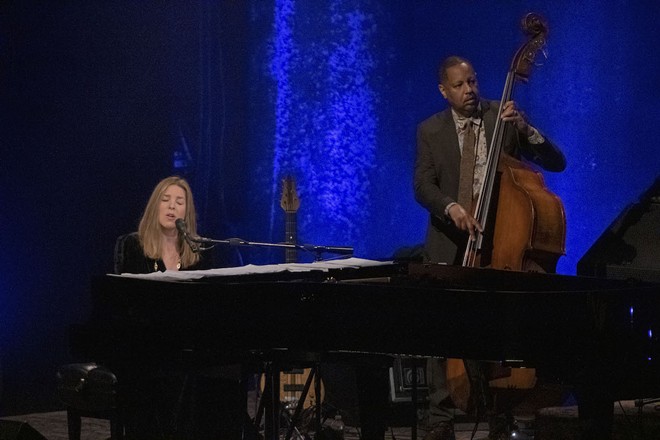 Closing up Krall and company’s main set was “Cheek to Cheek,” which had a much faster tempo than the versions that most of us know and love. You know, “Heaven…I’m in Heaven.” She introduced her band one last time—a ritual she practiced in between many of her songs—and made her closing statement: “It’s so great to be out here tonight, and you’re always in my heart,”

Or so, we thought those were her final remarks.

Before her encore of Al Dubin’s “Boulevard of Broken Dreams,” (no, not the Green Day version, you little punk rocker), Krall began rambling about how she enjoys listening to “some radio stations.” “We’re not playing anything we heard on the radio, I’m just saying,”