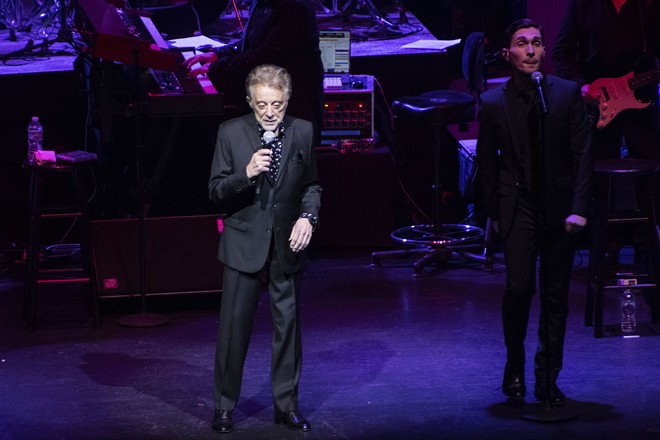 Photo by Josh Bradley
Considering his age, you’d think that Frankie Valli is following his own advice and—albeit scarcely—holding onto what he’s got.

He isn’t the youngest guy in the biz, so most of the music performed Friday night at a damn near sold-out Ruth Eckerd Hall was transposed a half step or so down, and in the crowd, there were maybe 50 people who still had naturally brown hair (myself included).

All that having been said, this nostalgia act was far from someone looking to make a quick buck.

Frankie is the only member of the Four Seasons still onstage. Bob Gaudio doesn’t perform anymore, Tommy DeVito—whose dues are long paid off—died of COVID-19 in 2020, and Nick Massi passed over 20 years ago.

Frankie is, without question, the face of the Four Seasons, having squealed out all of the group’s highest notes in the 1960s. At 87 years old, his voice is in the same situation that Paul Simon’s was in for years: He still sounds just like he did 60 years ago, with only a little bit of quiver here and there.

A little bit after 8:00 p.m., a retrospective video featuring bits and pieces of the group’s career rolled on the big screen, and without a teleprompter in sight, Frankie ambled out onstage, dressed in a suit and black shirt with polka dots, while the band kicked into “Working My Way Back To You,” which segued into “Opus 17.”

“Well, I must say, it is so nice to be back at work,” he said, starting off the regular post-COVID banter we’re probably going to hear from almost every performer for at least the next three years.

Surrounding him was an entire horn section, longtime musical director keyboardist Robby Robinson, and the new Four Seasons consisting of Ronen Bay, Joseph Ott, Craig Cady, and Noah Rivera, all of whom took care of choreography and impeccable harmonies. As for the band, a few solos came into play during a cover of the “immortal” Cole Porter’s “I’ve Got You Under My Skin,” and again on Frankie’s solo hit, “Swearin’ To God.”

Frankie cited “Silence Is Golden” as one of his favorites to perform, and dedicated it to members of the Witness Protection Program. “Now, how many of you are familiar with the Who Loves You album?” Frankie asked. Maybe half the Hall responded with a resounding roar of approval. “That’s it?” He asked before going into “Harmony, Perfect Harmony,” which saw scenes from COVID-infested communities, hospitals, and people just masking up. Frankie has never been an outspoken activist, so while he may or may not take COVID as seriously as Christopher Cross, it’s good to know that the Jersey boy isn’t in a Nugent state of mind.

Photo by Josh Bradley
After a brief intermission, Valli came back out wearing what appeared to be a biker jacket, just to rip into “Grease,” naturally. After crowd members finally started to get up and dance during “Who Loves You,” Valli mentioned his Romancing The ‘60s album, on which he gave his kiss to songs that didn’t belong to him and the other three Seasons from that decade. As a result, he gave a short medley of of The Temptations’ “My Girl,” and The Young Rascals’ “Groovin’.” “I don’t know where you can acquire the CD,” Frankie admitted afterward. “Maybe in one of the 7-11’s.”

What came next was an all-hits finale. Phone flashlights came on for “My Eyes Adored You,” the crowd sang verses of solo hit “Can’t Take My Eyes Off You,” and everything else was just a massive boomer sing-along. You know, “Sherry,” “Walk Like A Man,” and of course, “December, 1963 (Oh, What A Night).” For an encore, Valli gave us “Rag Doll,” and a “there ain’t no good in our goodbyes” free version of “Let’s Hang On.”

We all know that Frankie feels a closeness to Tampa Bay, since he brings his unforgettable hits to Ruth Eckerd Hall on a practically annual basis, having even celebrated his record-breaking 30th performance there in 2018. He was gifted a Hooter’s VIP card, the key to the city, and signed baseball memorabilia. And mind you, this was the first of two Four Seasons shows to take place at Ruth Eckerd Hall, the second one having occurred Saturday night, while the crowd’s grandkids were at Reggae Rise Up or Innings Festival, which would stretch hours past their bedtimes.

Maybe Frankie’s show did, too.