His baby, Amanda Shires, was beside him, too. Photo by Josh Bradley
Jason Isbell and Amanda Shires
At a very sold-out Ruth Eckerd Hall on Friday night, Jason Isbell’s fiddler wife Amanda Shires—who opened for the late John Prine in the same room about six oddyears ago—took center stage, and howled out Cat Power’s “Cross Bones Style,” as it appeared on her hubby—and the 400 Unit’s—2021 all-covers Georgia Blue album. “A lot of people who say they love Florida don’t mean it. Amanda truly does,” Isbell declared, adding that his wife of nearly 10 years is perfectly capable of planning even a day trip here.

The band and Isbell, 43, has been promoting the hell out of Reunions, its 2020 album released in the midst of COVID-19 lockdowns. But until last week, the Alabama posse has appeared to bring the new music to most corners of the country, excluding that of Florida, besides a few gigs in St. Augustine specifically.

Isbell always brings along opening acts that are either on their way to stardom—such as Cimafunk—or are smaller scale but beloved anyway, such as British singer-songwriter Richard Thompson, who opened for the 400 Unit during its last stop in Tampa Bay back in 2018.

This time around, it was African singer-songwriter Peter One who took the stage at 8 p.m. sharp Friday night. One—born Pierre Evrard Tra in Bonoua, a town in the Ivory Coast—calls Nashville home, but his absolute peak of stardom came in the 1980s. Along with his college friend Jess Sah Bi, One performed in African stadiums following the release of the duo’s 1985 album, Our Garden Needs Its Flowers. But with political tensions rising in the Ivory Coast in the mid-1990s, One—later followed by his family and Bi—immigrated to America, where he now works in nursing homes. 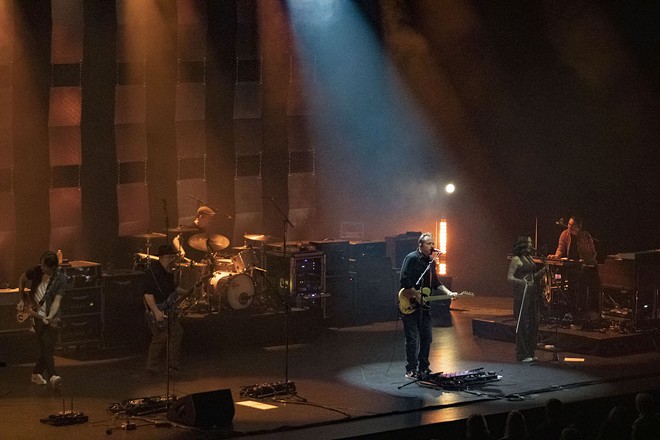 Photo by Josh Bradley
Jason Isbell and the 400 Unit
He didn’t dwell entirely on his past during his set, though. “Some of the songs will be on my album that is coming out just in a couple of weeks,” he announced, just after talking about how he’d be performing in both English and French. And some of One’s messages were pretty heavy, too. From domestic abuse to begging a friend not to return to Africa after getting sick of America—the latter of which is a true story that does not have a happy ending—One’s 45-minute set was a poignant reality check centered around how even the darkest songwriting can come from some sort of true story.

At 9:15 p.m., Isbell and Amanda Shires walked out to the sold-out room side by side. Once the remainder of the 400 Unit had entered, everybody swung into “It Gets Easier” off of Reunions, with its slightly uneasy message that while things can get easier in the shittiest situation, nothing is ever going to be ideal.

Speaking of said ideology, he didn’t neglect to mention the elephant in the room for those who knew. Or in this case, the walrus mustache that wasn't.

“One thing about David was if he didn’t like your song, he would say, ‘This song is a piece of shit!’ It didn’t matter if you were his grandchild,” Isbell continued. “So, I knew if he was willing to sing on it, he must have liked it, and that made me feel good.” Photo by Josh Bradley
Peter One
He would then dedicate “What’ve I Done to Help” to Croz—who sang backup on both the original recording, and at that final Santa Barbara gig—and he even swapped out his acoustic guitar for a Gibson SG during a solo from bassist Jimbo Hart midway through.

Other than soaring through four other tracks from Reunions, I would say that not much else has changed in Isbell’s world. He still doesn’t want to die in a Super 8 hotel, he still wants to go home through those Alabama pines, and—in an obligatory manner—he’s still being visited by Ybor City street girls while traveling alone. Isbell also did much of his own guitar work, as opposed to leaning on guitarist Sadler Vaden to do absolutely everything. The two dueled on the solo segment of “Be Afraid,” with Isbell wielding a Les Paul, and Vaden shredding a Rickenbacker, which may have been a subtle nod to The Byrds—which Crosby co-founded—or maybe Tom Petty, another one of Isbell’s all-time heroes.

The 400 Unit gives off a number of E Street Band vibes. No, it’s not just that Isbell’s wife is in the band now. No two setlists are precisely the same, chemistry levels appear to be incredibly high between band members—who would often form small ensembles in semi-circles with their fearless leader—and even though he introduces his bandmates enough times for his new fans to remember their names by the end of the show, Isbell will often give them the vocal spotlight. Vaden took on vocals for “Honeysuckle Blue,” a jam from his days with Drivin’ n’ Cryin’, an Atlanta-based Southern rock band he once played in.

Isbell’s set may have ended on an electric note, with the Drive-By Truckers’ “Never Gonna Change,” but first, Isbell decided to infuse a few more zaps of emotion. He introduced his band one last time, and started “Cover Me Up” with just his acoustic guitar, alongside Shires, and keyboardist Derry DeBorja. The rest of the band would head back onstage one by one, a task completed just after the crowd-pleasing “I sobered up, I swore off that stuff” line. 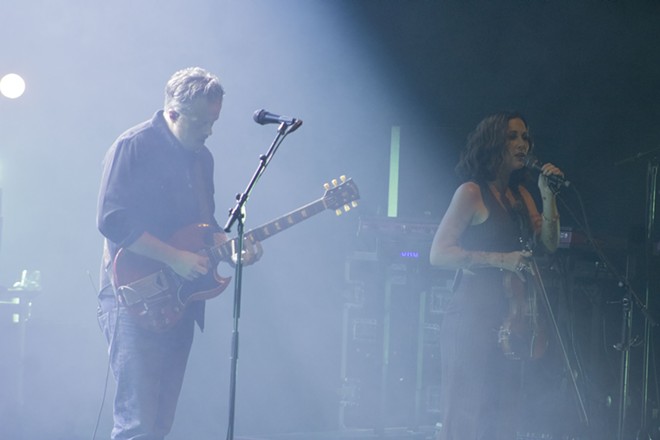 Photo by Josh Bradley
Jason Isbell and Amanda Shires
And for an encore, “If We Were Vampires” got even the single people in the house thinking about mortality.

Needless to say, it’s directed at a significant other. But for as much as David Crosby had openly accepted that his time was running out near the end, you can’t help but wonder if Isbell was silently dedicating it to his memory.

And on our end, here’s hoping we get forty more years with Isbell and the band. At least.

Josh Bradley is Creative Loafing Tampa's resident live music freak. He started freelancing with the paper in 2020 at the age of 18, and has since covered, announced, and previewed numerous live shows in Tampa Bay. Check the music section in print and online every week for the latest in local live music.
Scroll to read more Music News articles