His epic story comes to a climax Friday at Brass Mug. 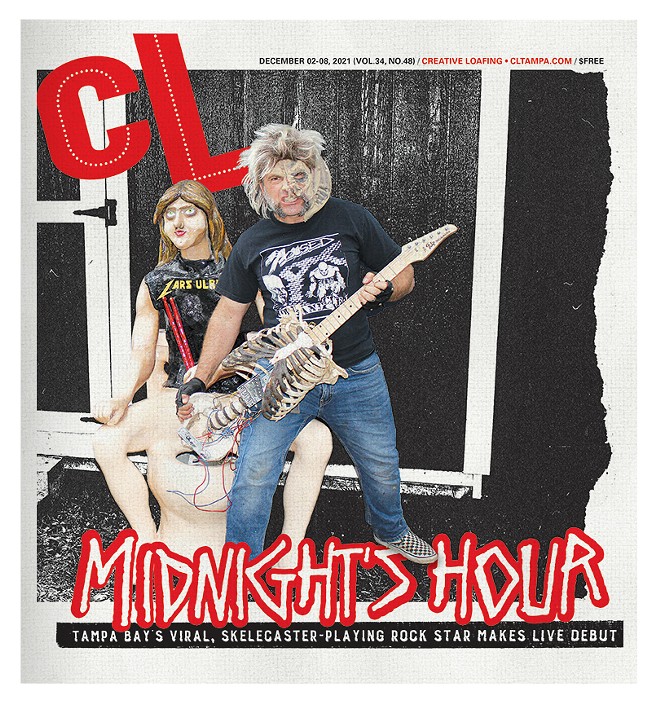 Cuban sandwiches, deviled crabs and strip clubs. Tampa is known for a lot of things. But it’s also known for Seminole Heights’ two-headed gator and a local guy—Odilon Ozare—who has official Guinness world records for the longest nail extensions and the tallest hat. An appreciation for metal is another hallmark of a true Tampeño, and the musical style meets the current king of quirky local lore this weekend when Prince Midnight makes his live debut at the Brass Mug.

It’s been nearly a year since the internet fell in love with the Tampa metal musician who allegedly turned his uncle’s bones into a “Skelecaster” guitar.

Uncle Filip, according to Huffington Post, introduced Midnight to rock and roll in the ‘90s. Filip was 28 when he died in a 1996 motorcycle accident in Greece. HuffPo’s David Moye wrote that uncle’s skeleton was donated to a local college; Midnight eventuallly got it back to make the guitar.

Moye doesn’t seem like the kind of asshole who tells kids Santa Claus isn’t real, but some locals (namely the soul-less jerk with the byline on this story) thought the skeleton shredder looked familiar. Canadian Broadcasting Corporation’s “As It Happens” even had me on to talk about whether or not Prince Midnight’s guitar is a hoax.
In September 2020 Midnight—whose real name is reportedly Yaago Anax—was a guest on locally-renowned music and talk program Grand National Championships (GNC), where his good humor added to the already charming and inimitably witty banter from show hosts. In February, when the legend of Yaago Anax started to roil the waters Reddit and pretty much every music magazine outlet known to humankind, GNC ringleader Alastair St. Hill, a magnificent sound engineer and fount of wit himself, told Creative Loafing Tampa Bay that, “Prince Midnight is a captivating person. He has so many areas of interest and expertise, and amazing stories about all of them. I’m not in the least bit surprised that he’s caught the world’s attention with his work.”

I won’t flat out say that Midnight is the same person who says they’re Odilon Ozare, or the punk-rock frontman who totally duped the Tampa Bay Times into thinking that two-headed gator was real—but CL emailed both Ozare and Prince Midnight along with HuffPo’s David Moye for comment. Only Yaago Anax replied for the record at the time, and only to threaten litigation and more or less say, CL was a crock of shit for even thinking someone would fabricate a story about crafting a most excellent axe in tribute to a fallen father figure.

So I bought in, and in September, Anax told CL that Prince Midnight would make his live debut before year’s end, adding that, “We’ve been rehearsing for months, it’s time.” He and drummer Chris Wotring have tapped a handful of local, heavy-hitting musicians to join him in a band that’ll fly under a new moniker: Prince Midnight & the Searing Torment.

Wotring famously played in Cellgraft, whose 2010 album External Habitation was named No. 27 on Decibel Magazine’s list of the Best 50 Grind/Powerviolence Albums of 2010-2019. The show will have a major grindcore feel, but also wear many operatic elements—including an actual opera singer, and the vibraphone, violin and bass that are hallmarks of Prince Midnight’s self-titled debut EP released last December.

Anax didn’t argue with CL when asked if it’s safe to call the show something of a rock opera since it will include dramatic acting and dancing.

“This will be more than a concert,” he said. Last week, the world found out that Prince Midnight wasn’t shitting us about that.

Right before Thanksgiving, he emailed to tell CL about his plumbing company, Hellmouth, where Midnight says he’s the world’s first-ever figural toilet builder.

“I made a Lars Ulrich toilet,” he wrote, adding that the work would be part of an immersive art experience that’s an extension of the Prince Midnight show at the Brass Mug.

“Everyone struggles with their own demons in one way or another, and this show is a way of dealing with my own."

Midnight says he learned the technique, which involves precisely measuring the face and its vertical and horizontal lines, “while apprenticing at Madame Tussaud’s in London.” Photos of early Metallica are the basis of Midnight’s sculpt, all perfected in his backyard which has been a mess of fiberglass, resins and body filler.

The Ulrich throne—which you can literally poop on this weekend—even has the approval of Metallica bassist Robert Trujillo. An interview host surprised him with a shot of the much-shared toilet. “Oh my god! You’re kidding. This is incredible, how come I didn’t see this?” Trujillo said. “This is a work of art, I want one. Where can I buy em?... I’m sure [Lars will] hear about this when I see him.”

And Midnight swears the toilet and Dec. 3 show—where there will also be roughly 10-15 hand-painted fine-art quality toilet lids—isn’t him trying to shit on Ulrich, who’s been publicly ridiculed with totems and videos created by Prince Midnight ally Wolf-Face. Instead, Midnight says this is his way to honor not just the drummer, but others who’ve inspired him, like painter Marcel Duchamp, sculptor Claes Oldenburg and performance artist Terence Koh.

“I could have painted a picture or made a traditional sculpture, but no one would have even noticed, and really, that’s not the kind of art and performance I do. The first band I ever loved was Metallica,” Midnight said. “I even went to see them a couple years ago with Lamb of God, so the passion hasn’t waned.” 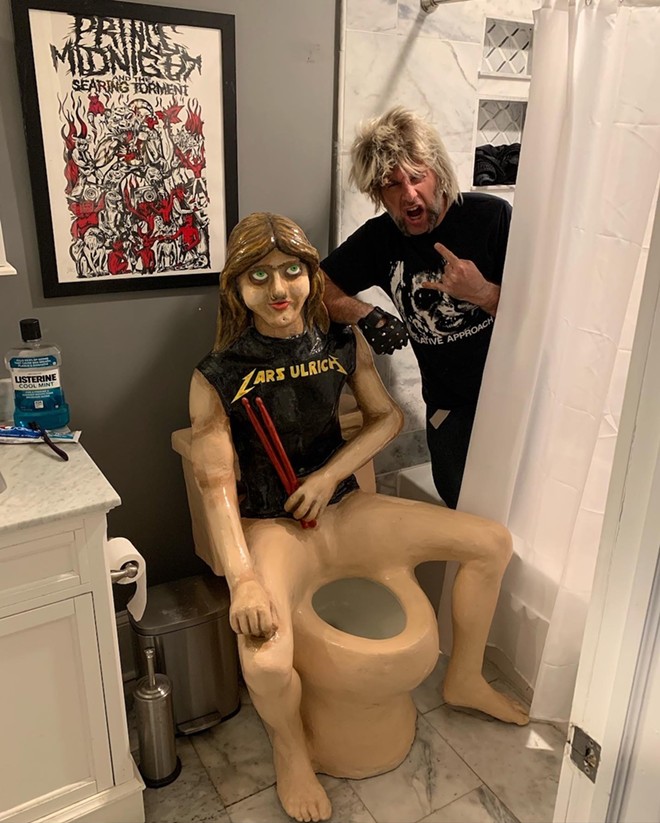 c/o Prince Midnight
Prince Midnight says he learned his figural toilet technique, which involves precisely measuring the face and its vertical and horizontal lines, “while apprenticing at Madame Tussaud’s in London.”
But the toilet and music won’t be the only fine art at the show. Tommy Breen—who acquired the famous World of Wonder sideshow out of Gibsonton after his mentor Ward Hall passed in 2018—is friends with Midnight and has made available large scale magic pieces that once traveled the U.S. Midnight is even refurbishing a Spidora illusion to incorporate in the show.

A giant puppet inspired by 19th century cult rituals will also be there, topped with the head of a demon named Bael, the antagonist of the Prince Midnight show narrative. In the show, Bael meets the sword of a Greek hero, Dardanos, who is part of a mystery cult on the island of Samothrace.

Prince Midnight’s album will tell you how the show ends, but facing your darkest moments, death, drama and depression is an underlying theme of the entire evening.

“Everyone struggles with their own demons in one way or another,” Prince Midnight said, “and this show is a way of dealing with my own.”
Support local journalism and a small but mighty team works tirelessly to share music news, events and concert announcements as the Tampa Bay music scene recovers from coronavirus shutdowns. A one time or monthly donation supports our staff, and every little bit helps. Subscribe to our newsletter and follow @cl_tampabay on Twitter.