After a decade of marriage, Derek Trucks and Susan Tedeschi finally share the same band. 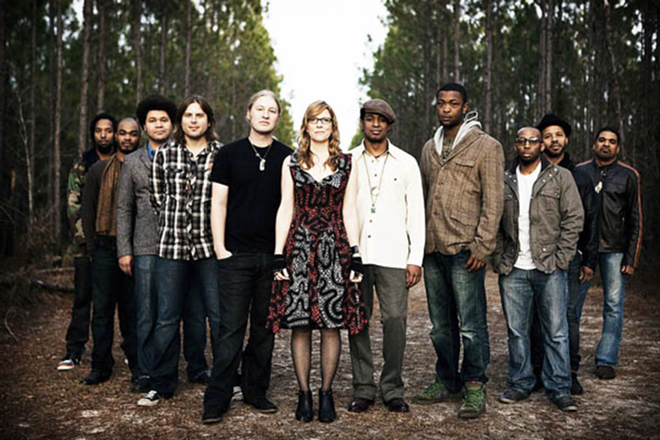 James Minchin
TOGETHER AT LAST: "For too many years, we had been ships in the night," says Susan Tedeschi of her years working apart from husband Derek Trucks (in black T-shirt).

It was a hot, still, rainless day in New Orleans when fate played its hand. On July 21, 1999, Susan Tedeschi, a 28-year-old rising blues star and a looker to boot, was set to join the Allman Brothers tour as an opening act. Derek Trucks, 20, a guitar wunderkind who had just officially joined the band, was curious. "There were expectations," Trucks says from his home in his native Jacksonville. "My band mates had been joking, 'We don't care if you guys stay together, but you need to have at least one kid.'"

Fate took a week or two. "Musicians don't move into each other's homes right away," Trucks quips. "They move into a tour bus together."

Six months after meeting, the couple bought the Jacksonville property. In 2001 came pregnancy, marriage and, in December, son Charles Khalil Trucks. (Sophia Naima Trucks was born in 2004.) Romance, family and music have forged what certainly appears to be an idyllic union — but one that was not fully consummated until last year's formation of the Tedeschi Trucks Band. The 11-member beast — including two drummers, two background singers and a horn section — plays a rootsy, tuneful blend of blues, R&B and rock, with dashes of the jazz, gospel and world music that husband and wife love. With one bold stroke, the busy musicians set aside their own ventures (ABB, Derek Trucks Band, Susan Tedeschi Band, tons of guest gigs) and went all in with their new ensemble.

"For too many years, we had been ships in the night," Tedeschi says during the same interview. "We'd both be in Europe but he'd be playing Barcelona three days after me. It was real frustrating. If we had a few days off, we'd have to hop a plane and surprise each other. Now we not only have a great band with great chemistry and musicians we love, but I get to wake up with him."

The couple formed the group over several months. With so many top musicians to choose from, the ranks swelled. Tedeschi and Trucks knew such a large lineup flouted the economics of the road, but gave in to the inexorable lure of leading the ultimate R&B/jam unit. The members wrote and recorded the album that would become Revelator at Swamp Raga, the recording studio on the Tedeschi Trucks property, eating meals around a big table, and letting the music marinate without a fixed deadline. The project's organic evolution emphasized songs over jams, with Tedeschi's marvelously soulful voice — imbued with a Bonnie Raitt-esque ache — commanding center stage. Trucks' pointed slide guitar flights are rendered all the more thrilling for their brevity.

The ensemble simmers beneath, building supple, syncopated grooves, decorated with swaths of organ and horns. Revelator's funky roof-raisers ("Bound for Glory," "Love Has Something Else to Say") are counterbalanced by lump-in-the-throat ballads like "Shelter" and "These Walls." Nearly all of the tunes are blessed with gospel-inflected buildups and rousing crescendos.

Trucks co-produced Revelator, coaxing the best studio vocals of Tedeschi's career. "He made me work harder, which is something I really never had in the past," she says. "On my last album, we did everything in one take, 14 tracks in two days. [The producer says], 'OK, that was great, let's move on.' With Derek, here was someone a little critical. 'That might've been a little pitchy.' 'Can you sing it a little less forced, make it prettier?' I thought, 'Finally, someone who cares.'"

Revelator, released in June, raked in enthusiastic reviews and has been nominated for a Grammy in the Best Blues Album category. Rolling Stone named it 45th in its survey of the "50 Best Albums of 2011." (Recently, the magazine also rated Trucks 16th on its "100 Greatest Guitarist of All Time" list.)

Contrast this year's Grammy quest with that of a year ago. Both Tedeschi and Trucks were up for Contemporary Blues Album, she for Back to the River and he for Already Free. "We watched the Grammys at home, together," Tedeschi recalls. "I had a vote and I voted for Derek."

Was there a corner of Tedeschi that coveted the award for herself? "There was a little bit of that," she admits. "It was my sixth time nominated without ever winning. But I was so happy. When Derek won, we won."

Currently, the focus is on the Tedeschi Trucks Band tour, also garnering plenty of flattering notices. On stage, the tunes expand, everyone getting moments in the spotlight. The band's set list is malleable, blending originals with well-chosen covers by the likes of Sly & The Family Stone, Stevie Wonder and Ray Charles. "I tend to get bored quickly," Tedeschi says. "Not with this band."

The couple is home for the holidays, spending time with the kids until the tour resumes on Dec. 28 in Jacksonville. So what has become of the progeny that elicited such expectations a dozen years ago? "My son is more the baseball player and mathematician," Mom says. "My daughter sings, plays violin, piano and guitar, and writes songs. She's the entertainer."