Brandon Flowers was all smiles. Tonight, The Killers headline the 19,000-capacity MidFlorida Credit Union Amphitheatre as part of 97X’s expanded Next Big Thing lineup. After Thanksgiving, the band plays a one-off show in Abu Dhabi as part of a Formula 1 party. Soon afterwards in the spring, the Las Vegas rock giant plans on releasing a sixth studio album, Imploding the Mirage, before embarking on a short run of summer stadium dates in the U.K.

The effort will mark the band’s outing first since 2017’s Wonderful Wonderful, and, like anything The Killers do, the LP the potential to be one of the best records of the year.

And for the whole of 2020, just over 700 lucky Tampa Bay fans will be able to say that they saw frontman Brandon Flowers come out of his cage for an intimate warm-up inside within the walls of one of Ybor City’s busiest rock clubs.

Yeah, that’s right: The Killers — who last played Ybor City during a headlining gig at The Masquerade in support of their 2004 breakthrough album Hot Fuss — played the 720-capacity Orpheum in Ybor City. The band did a similar thing in 2011 by playing 1,250-capacity Beacham in Orlando the night before its Orlando Calling headlining set at the Citrus Bowl, but man does Flowers love being up close and personal with the band’s fans.

That much was evident, and then some, during The Killers’ 18-song set where Flowers — flanked by an eight-piece band that included three backup singers plus longtime bandmates Ronnie Vannucci Jr. and Ted Sablay — smiled through set-opener “All These Things That I’ve Done” before drinking in a big crowd sing-along and mouthing the word, “wow,” to himself. 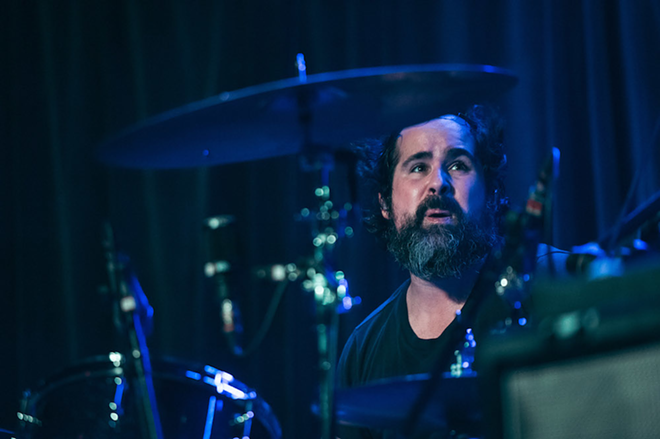 The capacity crowd (one guy was offering people $400 for their tickets in the queue) was feeling it, too, and the good times rolled, and rolled, for almost 90-minutes as The Killers dusted off old favorites (“Bones”), played noir-cosmopolitan classics (“Bling (Confessions of a King)”) and fired confetti cannons as disco and funk riffs (“Run For Cover”) gave way to muscular clubland-funk that offered Flowers the opportunity to vogue on top of the monitors (“The Man”). The band even saved room for self-depreciation.

“We got a lot of shit for Sam’s Town,” Flowers said before playing “A Dustland Fairytale.” He mentioned the band’s habit of shifting sounds between albums, adding that, “This next song embodies the best parts of that album.”

Another all-American anthem, “Runaways,” came after that, and it found Flowers, still-beaming, air-drumming through the snare fills and bathing in a wash of synth that could not down out the waves of voices singing, “We can't wait till tomorrow.”

Missing from the set was The Killers’ politically-charged early 2019 single, “Land of the Free,” which is a clear edict regarding  Trump’s border wall, racism, and America’s gun epidemic. The tune — a heartland piano-ballad that might’ve hit pretty hard, especially with the backup singers — would’ve been a welcome foil to the high-energy set, but maybe The Killers knew that the room might be exhausted after yet another year of Trump, and two weeks of impeachment-related testimony.

So what Orpheum got instead was a Flowers in a new shirt, and three-song encore that ended with the cathartic one-two punch of “Jenny Was A Friend Of Mine” and “Mr. Brightside,” two Hot Fuss songs that introduced The Killers to most of America in 2004.

Maybe The Killers were saving “Land of the Free” for tonight, but it doesn’t really matter. What Flowers & co. proved on Thursday was that even the world’s biggest rock bands still have a place in the club where they can connect with fans face-to-face.

“We can't wait till tomorrow,” indeed — but we were glad to be at Orpheum last night.

Setlist
All These Things That I’ve Done
Under The Gun
Spaceman
Bones
Bling (Confession Of A King)
Miss Atomic Bomb
Human
Run For Cover
The Man
Somebody Told Me
Smile Like You Mean It
A Dustland Fairytale
Runaways
Read My Mind
When You Were Young
—
The Rising Tide
Jenny Was a Friend of Mine
Mr. Brightside