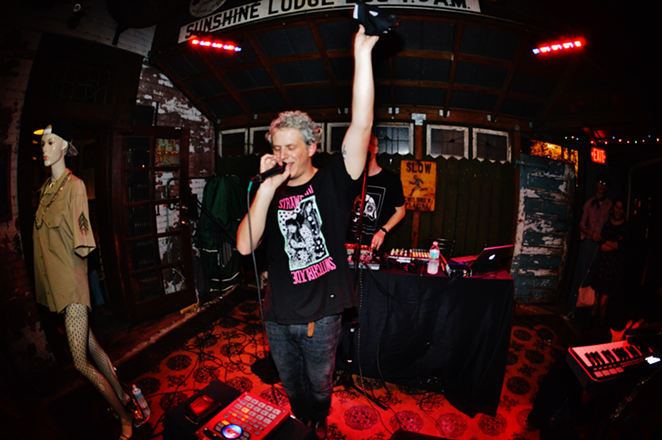 TV Girl does a pretty good job of making connections in the towns the band visits, booking smart tours and selling tickets to shows. The L.A. pop band does it without having to live on social media either.

"It feels good," Brad Petering wrote to CL when asked about the loyalty of TV Girl's fans. There's been pressure to get an Instagram since the picture-based social media platform as taken off, but Petering said he hates it.

"It’s really hard to imagine my heroes, Bob Dylan, or Leonard Cohen or Lou Reed, giving a shit about something like Instagram," he said. "Can you imagine what a bummer it would be to see those artists 'grammin' in their prime? The way I figure it, Frank Ocean doesn’t have an instagram and he’s the best artist we have to offer right now, and shouldn’t we all aspire to be more like him."

On Sunday, June 17, TV Girl (supporting a new album, Death of a Party Girl) will make real life connections with fans at Crowbar in Ybor City. Petering, who is taking a few months off of music after the tour, took some time to answer a few questions about his band, other bands (Todd Rundgren, Youth Lagoon) and what it's like to be a "lazy" artist.

Read our Q&A — and get more information on the show — below.

We actually stopped playing that song a few tours ago. I was sick of it. Plus I wasn’t even the singer who sang on the recording and I stopped identifying with the lyrics I wrote. As for Todd, I doubt he ever heard the song, it was his label who caused a fuss. I’d like to think that he’d dig it but you never know. I saw him live for the first time two years ago and he was amazing. He had Dam Funk as his “backing band” and did this crazy electronic performance. The man is a true innovator who never stopped pushing himself even in his later years. I love Todd.

You’re able to exist, and pre-sell concerts, without much of social media presence outside of letting folks know you have records out, are going on tour, etc. — what’s it like to feel that kind of support from fans in a media and entertainment ecosystem that seemingly demands that artists are in their fans’ faces all the time?

It feels good. There’s been a vague pressure to get an instagram as it has replaced Facebook and Twitter as the main social media outlet. But I hate it. It’s really hard to imagine my heroes, Bob Dylan, or Leonard Cohen or Lou Reed, giving a shit about something like Instagram. Can you imagine what a bummer it would be to see those artists “grammin” in their prime? The way I figure it, Frank Ocean doesn’t have an instagram and he’s the best artist we have to offer right now, and shouldn’t we all aspire to be more like him.

Mystique is something I like in artists, but it’s a hard thing to quantify. I think social media is mostly corny PR and that artists are worse off to use it. And I have a semi-active Twitter so this critique is aimed at me as much as anyone.

And your band is still very much DIY in that it books its own tours, does its own art and videos — I get that all three of you help with the process, but is that high-tough thing a budgetary function or do you enjoy having your hands in every part of the band?

We book our own stuff because we have to. We’ve never had a good booking agent that was interested in working with us. Even though we sell a decent amount of records and concert tickets, I think music industry people care mostly about press and media attention, and we don’t get any of that.

I wouldn’t write off the possibility of working with someone else, but there are definite advantages to doing things yourself. I can say we are so much better off right now having hustled and made connections ourselves than a lot of other peers who through their lot in with industry people.


How do you think Charlyne will hold up? What about the TV Girl All-Star Band — is it ready for the road?

The TV Girl traveling all-stars are in top form. As for Charlyne, we retired her a few tours ago. Put her out to stud in that great storage closet in the sky.

And to stay on personnel, Can we talk about Trung? I saw that you still hang, try and get him to skateboard with you or try solo music. It’s obviously weird to try and speak for him, and you remain friends, but why did he end up leaving?

He quit because being in a band was not his dream. When it came time to decide whether we wanted to hit the road and make a go of it, he opted to pursue a more traditional life and I don’t begrudge him for that. He’s smart and a hard worker, and so he has a lot of opportunities in the real world. I’m a lazy fool, so music was my best option.

You’ve often talked about your “self care cave,” and how booking your own tours allows you to organize an itinerary that won’t make you want to blow your brains out — at what point did you realize that self-care was important, and how were you able to make it part of your life?

These tours can get exhausting. They’re mostly fun but a lot of the time it’s so fucking boring and lonely that you try to dull the edge by boozing and staying up late partying and it just destroys your body. The good thing is that once you get home, you don’t have a job so you can just lie around the house and dick around all day for months, which is probably the most important part of any creative process. Mine anyways.

I think you have plans to lay low in New York and just skate after this tour, but do you buy a lot of records on the road? Watch or listen to old film TV or radio shows? Like, how much sample building can you do on the road?

It’s true. I’m gonna take four months to go to New York and do anything but work on music. Maybe work on visual art or write some kind of book. But mostly just skate and hang out and recharge the creative juices.

I collect photography books. Usually nude photography or glamour photography from the 60s and 70s. Traveling around is good because I can check book stores all around the country and find lots of rare or one-of-a-kind books. I picked up four new books on our last tour, which is a pretty good haul. I don’t work on music at all on the road. I can’t do anything creative whatsoever while we’re out there.

And re: laying low — are you giving yourself this time because you finally got Youth Lagoon to quit music?

The only reason I make fun of Youth Lagoon so much is because he made fun of us when we played a show together years ago. He probably doesn’t even remember but I don’t forget.

And re: that decision to not have any new music waiting after this tour. You mentioned wanted to be able to do such things like skateboarding before you’re too old — how old are you, and what got you thinking that you needed to take a break from music?

I’m probably three or four years past my physical prime for skating, but lately I’ve been skating a lot more so I’m as good as I’ve ever been. I’ve been working on music constantly for the last 15 years. The idea of purposefully not thinking about it at all for four or five months just seems refreshing. I’ll get back to it pretty quickly because there’s several projects I have in mind that I’d like to do.

I liked your answer to the AMA question about “Melanie” — you’ve also talked about liking Bob Dylan’s mean songs, but really it seems like you’re just trying to serve songs, be truthful in what you’re making. How stressful is being honest in your songs? Like do you start going crazy after releasing a song like “Melanie”?

Most of the time I’m not telling the truth. A lot of the songs are based around a real incident or situation, but then filled out with my own biased commentary or made up details. It’s not stressful because it’s fictionalized enough so that it’s not really about a real person. There’s no real “Melanie” and the things in the song didn’t happen exactly that way. It was more elaborating on a feeling I had. I don’t find writing about life to be stressful. On the contrary, it’s therapeutic. I think everyone should write about their life. Things often don’t seem so bad when you see them written down in a somewhat objective way on paper.

You’ve called yourself “lazy” — how do you get over that?

I’ve just accepted it as a natural part of my being. I don’t like working hard. And if I had to work hard at something like music I wouldn’t like it as much. Holing up in a studio for months at a time doesn’t appeal to me. Nor does going on tour nine months of the year. I don’t like thinking about music as a job.

The only thing that gets me through is that I’ll get an idea to do something and it will be like an itch in the back of my mind that will bother me more and more until I do it. Like with the Maddie Acid record. After the first Maddie Acid features I thought, wouldn’t it be funny if we did our own record (listen to it below). But it took a lot more work and time than I thought it would to put it together and we were quite slow at finishing it. But as time went on, not having it done just bothered me to the point where I couldn’t take it and just sat down and put in the work.