A decades-old 'monorail' car is for sale in Pinellas Park, here's how it got there

To understand, you have to turn back the clock nearly five years and travel 1,000 miles north. 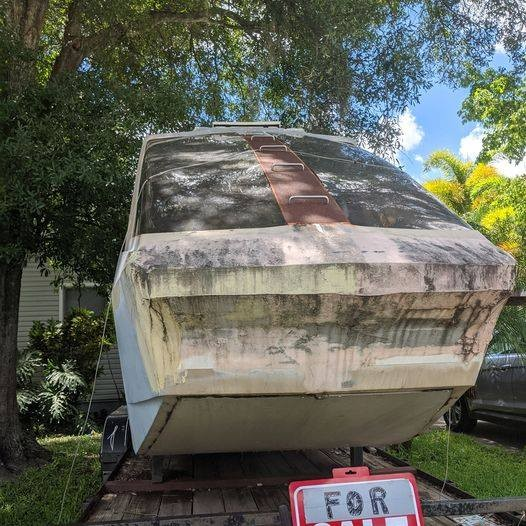 Skaia Colocado
The current state of the Kings Island monorail.

In a driveway of a Pinellas Park residence, a monorail car welded to a trailer has sat mostly untouched for the better part of two years. Then, late last month, it was listed for sale on Facebook. Skaia Colocado, the car's current owner, tells Orlando Weekly there has been some interest in the unique item, but most people seem not to understand what exactly it is.

For that, you have to turn back the clock nearly five decades and travel a thousand miles north.

A year before Walt Disney World opened in Orlando, San Diego-based SeaWorld opened their second park, SeaWorld Ohio, setting off a tourism boom throughout the state. Two years later, in 1972, Cincinnati-based amusement park Coney Island moved to a larger site and changed its name to Kings Island. The park was filled with roller coasters, live entertainment, and what was at the time one of the most expensive dark rides found outside of a Disney park.

Owner Taft Broadcasting used some of the tactics that Disney had successfully harnessed in Disneyland and the year prior at Walt Disney World — in 1973, both The Partridge Family and The Brady Bunch filmed episodes in the Ohio park. These cross-promotions and a string of special events kept the turnstiles busy, but after two seasons of new rides and promotions it was clear something else was needed.

Taft decided to compete against SeaWorld and differentiate itself from parks like Disney’s, so it turned to a budding Florida based animal park company, Lion Country Safari. Its South Florida location had just turned six years old, and it had recently opened new parks in California, Texas and Georgia. The partnership saw Taft transform 100 acres of its Kings Island site into Lion Country Safari at Kings Island, opening it during the 1974 season at the park. Taft also opened a second Lion Country Safari in Virginia, where it was still building Kings Dominion, a sister park to Kings Island.

A two-mile-long monorail was added to set apart the Ohio animal park from the other four Lion Country Safari parks. While marketed as a monorail and called that by most guests, it technically wasn't one — it ran along two parallel rails placed close together.

The animals were an immediate hit, but management issues and multiple incidents of animals escaping caused conflict between Taft executives and Lion Country Safari. In 1976, after a lion mauled an employee, Taft executives decided it was time to take over the attraction themselves. The name of the attraction was changed to the more generic Wild Animal Safari. Lion Country Safari was out, but the animals, and monorail, remained.

To help offset rising costs, the park began charging for monorail rides, making it one of the park's first upcharge attractions. But with its busbar-style electrical connections, the monorail posed issues in the animal habitats — it sat not far off the ground, so animals could lie down on the track and block trains, or mud and water could create electrical issues.

Increasing demand for thrills and declining attendance at the safari park caused park officials to shutter the attraction in 1993 and donate the animals to a nearby animal conservation center.

The monorail sat backstage at the park for another five years until in 1998 it was sold for $1 to local businessman James O. Bonaminio, better known as Jungle Jim. The trams were sent to his famous roadside attraction-esque grocery store, Jungle Jim’s International Market in Fairfield, Ohio.

It took 15 years for the monorail to come back into operation at Jungle Jim’s, where it shuttles event guests between a parking lot and the Oscar Event Center. The trams were updated to replace the problematic busbar electrical system with an onboard engine. The original plans featured a much longer track, but not all seven of the cars purchased are needed for this route, which is less than a mile long. An inoperable monorail also sits above the entrance to Jungle Jim's Eastgate location. 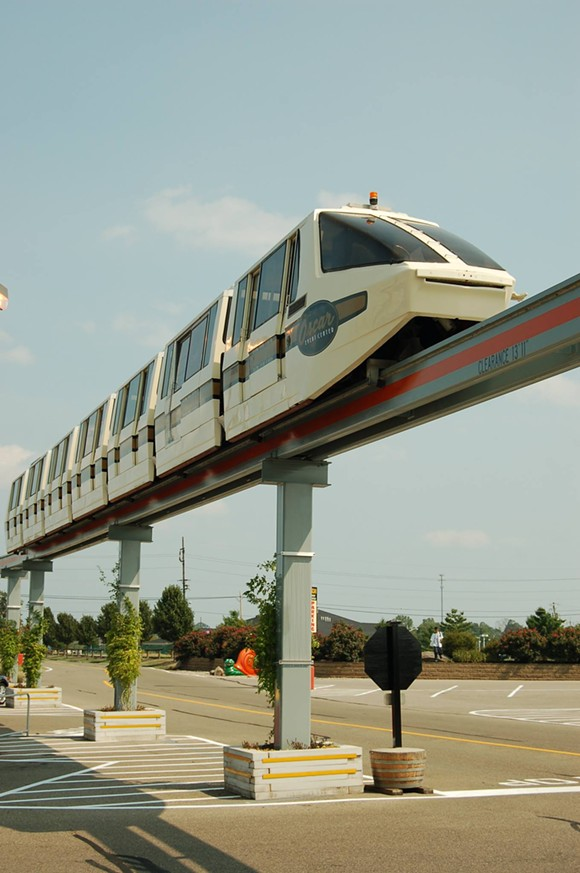 Bonaminio has transformed his grocery store into a six-and-a-half-acre wonderland that's now one of the nation's most unique foodie destinations, thanks to his ever-expanding collection of animatronics, fiberglass items and one-of-a-kind displays. Many of those larger-than-life items were found and transported to the site by Bonaminio’s friend Michael Testa, a Cincinnati-based auctioneer who is always on the hunt for the unusual.

For years, Testa had tried to convince Bonaminio to give him one of the trams. Finally, once it was clear the extra tram wasn’t needed, Bonaminio sold the tram to Testa. Testa, familiar with shipping oddly shaped items, knew the tram cars posed a unique challenge. To make it easier to move, he had it welded to the trailer it still sits on.

The conductor car has a sweeping split windshield that, to Testa, looked like the front of a rocket ship. Testa decided he wanted to turn the tram car into a retro rocket-styled food truck, inspired by his childhood memories of Magic Kingdom’s Tomorrowland.

Down in Florida, Testa’s nephew and sister were thinking about opening a small ice cream truck. The rocket-resembling tram seemed like the ideal option, so Testa headed to Florida with the trailer and tram attached to the back of his 20-year-old pickup truck.

But as the food truck idea evolved, it became clear the monorail car wouldn’t work. That’s when Skaia Colocado purchased it, and Testa transported it from his sister’s place on Florida’s east coast to its current location near Tampa.

The rocketship food truck idea was out, replaced with a new dream: Colocado wanted to create a tiny home where she could live as she headed out west. But with no working electrical or plumbing, turning the small tram car into a fully functioning mobile tiny home was a bit more than Colocado, who plans to join the military, was ready to take on after all.

So now the tram sits in her mother’s driveway while Colocado searches for the right person to bring life back into this historical theme park relic.

Testa holds out hope that someone else will create the rocket ship food truck he envisioned, but to him, its real charm comes from its history. As Testa puts it, “part of what makes it so special is the romance of it. It’s unusual. I hope one day it can once again bring joy to people as it did for all those years at Kings Island.”

The trailer is registered in Florida. It is listed for sale for $2,500 OBO, and Colocado has expressed interest in possibly trading it for a used truck.

This story originally ran in our sibling paper Orlando Weekly.